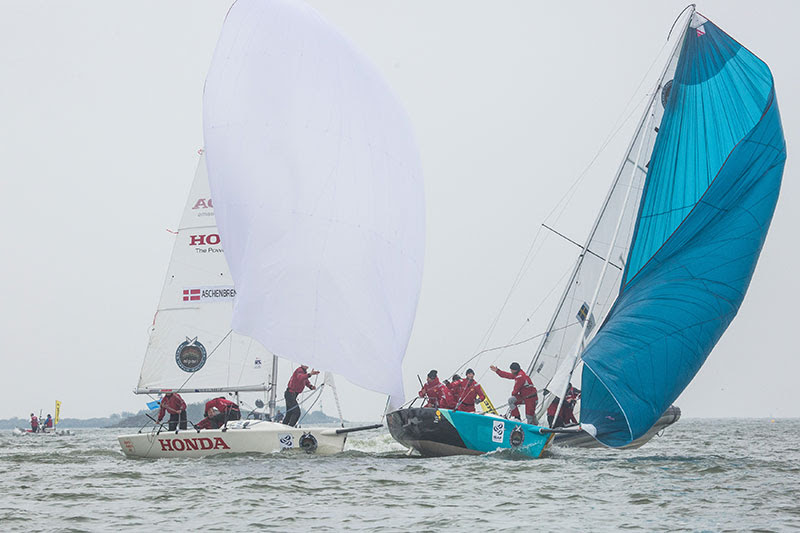 The top three teams in the Alpari World Match Racing Tour (AWMRT) were the only teams to keep a perfect score on day one of the inaugural Dutch Match Cup in Lelystad. Ian Williams, Taylor Canfield and Mathieu Richard all returned from the opening salvo of Qualifying with a 3-0 scoreline. However, not all the Tour Card holders got to grips with the Maxfun25 keelboats straight away, with Bjorn Hansen failing to get off the mark in his three matches.

Of the Wild Card and Qualifier entries, Arthur Herreman was particularly impressive, winning two of his three matches, beating Hansen and Joachim Aschenbrenner but losing to Williams. “These boats are a bit special,” smiled the young Frenchman, who won the qualifying regatta in Lelystad and gained some valuable experience in these same boats a month earlier.

Williams, the four-time ISAF World Champion, loves the challenge of learning the quirks and peculiarities of a new class, and he made a good job of mastering the Maxfun25 for the first time today. “They’re the smallest we sail on the Tour, the most sensitive to crew weight and position,” he said. “It’s about remembering your dinghy sailing days, focusing on your crew weight and kinetics. It has worked well for us so far, but a long way to go.”

The wind was always good today, gusting up quite strongly at times and shifting through 60 degrees during the course of today’s six flights of competition. The rain came through in pulses, with the sunshine making brief appearances, although the 12 teams were too focussed on their own battles, often engaging in aggressive pre-start manoeuvring close to the harbour wall. Canfield enjoyed the fight. “It’s a bonus to have such great breeze here, in such small boats. They’re really physical, which makes the whole crew work really hard.”

Talking about working hard, there hasn’t been much time for the Tour Card holders to recover from Chicago Match Cup, the previous event on the Tour which finished just a few days ago. “We finished racing last Sunday in Chicago,” said Richard, “jumped on the planeon Sunday night and arrived on Monday afternoon, so we don’t have much time for anything other than travelling. We’re not completely ready for the competition, but it’s the same for all the teams, so we have to adapt as quickly as we can.”

For Hansen and his fellow Swedes, it’s adapt or die. “It can’t be worse than today,” smiled Hansen philosophically. “Definitely I think we’re going to go in the right direction and get some points on the scoreboard in the coming days. It’s quite a learning day for us and we had some problems during the day. Mostly I tried to do things that were not possible with this boat, so I have to apologise to the crew for that. We’ve talked it through and feel quite positive about tomorrow.”

David Gilmour comes to Lelystad fresh from finishing 7th in the 49er World Championships in Spain last week as he pursues a twin-track career in Olympic campaigning and match racing. Meanwhile two of his crew, Pete Nicholas and Luke Payne borrowed a 505 dinghy to finish 2nd overall in a 173-boat fleet at the 505 World Championships in Germany a month ago. The change of sailing seems to have done Team Gilmour’s match racing no harm, with two wins and one loss from today. “Here we’re sailing a new boat that’s similar to a skiff, so it’s quite fun out there,” said Gilmour after racing the asymmetrically-rigged Maxfun25 for the first time. “I think all the different styles of sailing make you a better all-round sailor.”

Klaartje Zuiderbaan, skipper of the only all-female team at the event, may not have won any matches today, although she gave a few of the more experienced teams a few scares along the way. “We’re happy to be part of this regatta,” she said. “At the beginning of this year we weren’t even a match racing team, but somehow we managed to get an invite to this event. It’s great to race against the top guys in the world, and I think we didn’t make it that easy for them. We learn from them every time, and that’s great.”

This afternoon the seven Tour Card holders competed in 12-metre-long classic Lemsteraak Dutch fishing barges, dating back to 1876, in a Pro-Am regatta. This evening is the Opening Ceremony, followed by a barbecue for the sailors and organisers.