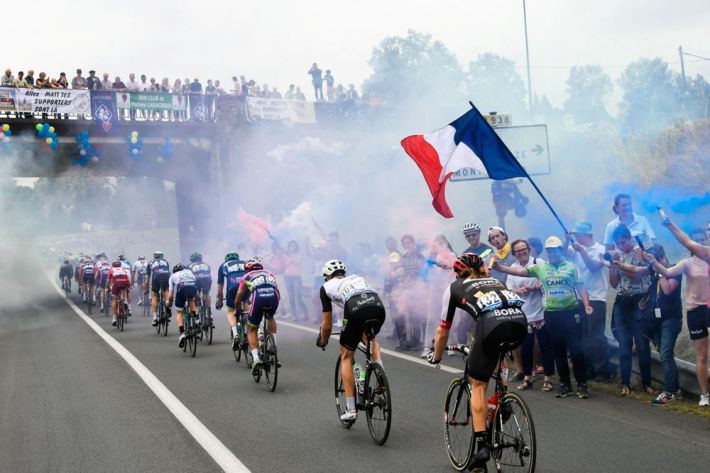 Friday’s 13th stage of the Tour de France went ahead amid heightened security despite the terror attack which killed at least 84 people in Nice on Thursday night.

Some 600 security forces were deployed along the 37km-long route from Bourg Saint Andeol to La Caverne du Pont d’Arc in the south of France.

“All access roads leading to the route have been blocked,” assistant Tour director Pierre-Yves Thouault, who is in charge of security, told AFP.

The Tour is officially in mourning according to organisers, with festivities suspended on the day’s stage.

A minute’s silence was held at the start and another will be held at the finish while the publicity caravan that precedes the Tour along each stage route was silent in memory of the terror attack victims.

“We want this day to be dignified in hommage to the victims,” said Tour director Christian Prudhomme ahead of the start of the stage, a 37km time-trial from Bourg Saint Andeol to La Caverne du Pont d’Arc in the south of France.

Despite the extra security, former world champion Rui Costa of Portugal admitted he was afraid that the Tour could also be targeted, in particular because of the thousands of people who line the streets every day to watch the cyclists go past.

“#?prayfornice? I don’t feel safe here in France,” he wrote on Facebook.

“Cycling brings thousands of people together in the same place, it’s an easy target.

“I’m afraid for the cyclists and for the fans.

“My sentiments are with all the families and friends of the victims of yet another barbarous attack.

Ireland’s Sam Bennett was the first rider to start his race against the clock at 10.05am local time (0805 GMT).

The yellow jersey wearer, who suffered his own personal drama in a sensational stage 12 finish on Mont Ventoux on Thursday, paid tribute to the victims on Twitter.

“Thoughts are with those affected by the horrific terror attack in Nice,” he wrote, alongside a picture of the French flag.

Riders were reacting on social media as soon as the attack happened on Thursday.

Dutchman Bauke Mollema, who is fourth overall after a strong ride on Thursday despite being caught up in the same crash with a motorcycle that threatened to ruin Froome’s defence of his Tour crown, wrote on twitter: “I couldn’t sleep yet and now read about something more important than the Tour. My thoughts are with the people of Nice. F*ing crazy world.”

“The day’s stage in the Ardeche is maintained. We asked ourselves the question but we think, in agreement with State authorities, that the race must go on,” said Prudhomme.

“And that we must not give in to the pressure of those who want us to change our way of life.

“The Tour will continue with restraint and dignity.

“Our thoughts are with the victims, we commiserate with all those affected, who’ve lost their loved ones, who are injured in their bodies or in their souls.

A minute’s silence was held in the departure village before Bennett set off on his time-trial.

Another minute’s silence will be held at the finish when the various distinctive jersey wearers, including Froome, head up to the victory podium to receive their prizes.