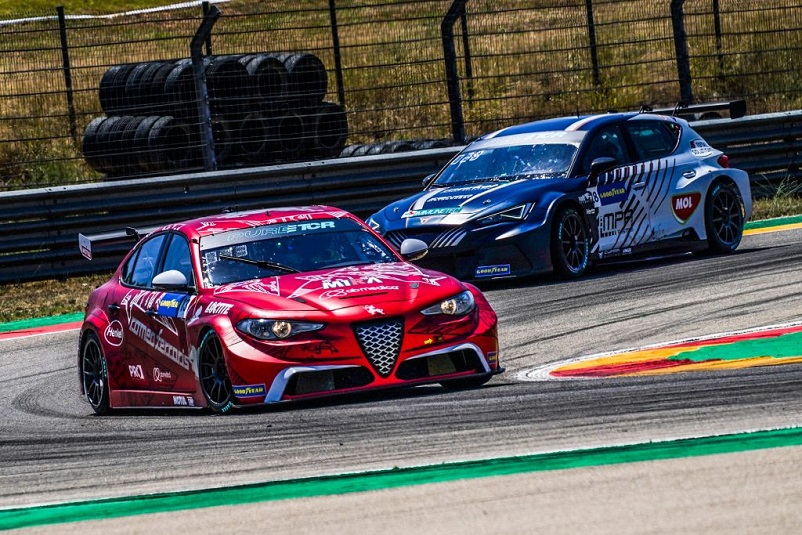 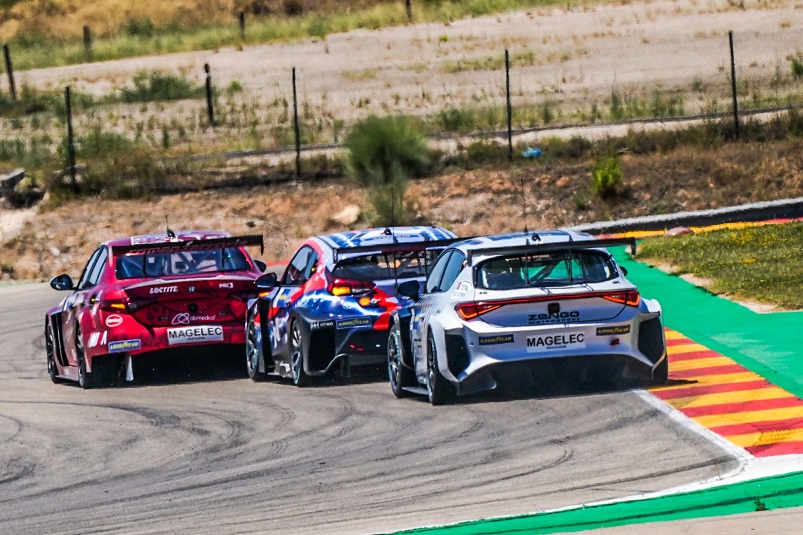 Four thrilling Round 1 Battles kicked off PURE ETCR Race SP at MotorLand Aragón with Rodrigo Baptista and John Filippi taking their maiden round victories and Hyundai, CUPRA and Romeo Ferraris all tasting success on the day.

PURE ETCR’s innovative race format began the previous night with The Draw, which placed Hyundai Motorsport N drivers in the advantageous inside starting position for each of Friday’s Round 1 Battles.

They were not to dominate the track action however, as the victories were shared between themselves, Romeo Ferraris – M1RA and CUPRA X Zengo Motorsport.

Another unique aspect of the world’s first all-electric, multi-brand touring car series is Power-Up – which pushes each car up from 300kW standard power to 500kW – the equivalent of 670bhp – for a maximum of 40 seconds per Battle.

Romeo Ferraris – M1RA racer Baptista cleverly saved much of his allocation until the final two laps of Battle 1, keeping the nose of his Giulia ETCR by Romeo Ferraris clean while his rivals disputed the lead.

Those rivals were CUPRA’s Jordi Gené and Hyundai’s Tom Chilton, who banged wheels going into Turn 1 on the final lap, providing Baptista with all the motivation he needed in what was a thrilling encounter in which incredible action never eased off.

In Battle 2 CUPRA’s Mikel Azcona won to increase his series lead to 20 points; the Spaniard triumphing after a tense battle with Hyundai’s Augusto Farfus that was only resolved with one lap remaining. Stefano Coletti (Romeo Ferraris – M1RA) was third.

After a visit to the Energy Station to recharge, the cars were taken to the Starting Gates for Pool B Round 1, which opened with a much-anticipated Battle between Hyundai’s Jean-Karl Vernay and CUPRA’s Mattias Ekström, which was resolved in favour of the Swede.

The action ended with a storming drive from Hyundai’s John Filippi, who lost out to the Giulia ETCRs of Luca Filippi and Oli Webb off the line, used his Power-Up mid-race to take the lead and then held on as the Italian machines attacked his on the last lap.

The points awarded during Round 1 means Azcona has increased his series lead to 12 points over Ekström, who has moved into second place overall ahead of Vernay.

Baptista, Azcona, Ekström and John Filippi are all currently tied for the lead of the event; the winner of which will be determined in Sunday’s DHL SuperFinals.

Rodrigo Baptista (Romeo Ferraris – M1RA) said: “This is the best way to start the weekend. I didn’t have the radio working, so I wasn’t sure exactly what was happening with the other two cars [Gené and Chilton], but I kept a bit of the Power-Up to the end and I’m really happy to finish first in this first Battle. I’m already looking forward to tomorrow.”

Mikel Azcona (CUPRA X Zengo Motorsport), said: “I could not be happier. At the start we all out-braked ourselves and missed the first corner, but then I tried to just follow Augusto [Farfus] and manage the Power-Up. We did a really good job. I tried to overtake at the hairpin and managed with no contact. The he hit me on one side and I pushed him out a bit, but it was a good, close battle. I feel quite strong with this car and we’re definitely going in a good direction.”

John Filippi (Hyundai Motorsport N), said: “I’m very happy because it’s a big effort. I’m lucky because I saw my team-mates do their battles and take different strategies, so I could learn from that. I think in the end I used the best one. I used what I’d seen them do and optimised the strategy for me and my situation. I made a very bad start and made a mistake at the end of the Battle, but it was good enough to win. It’s a good start and great points for the championship, but there’s a lot still to do as we try to win this weekend.”