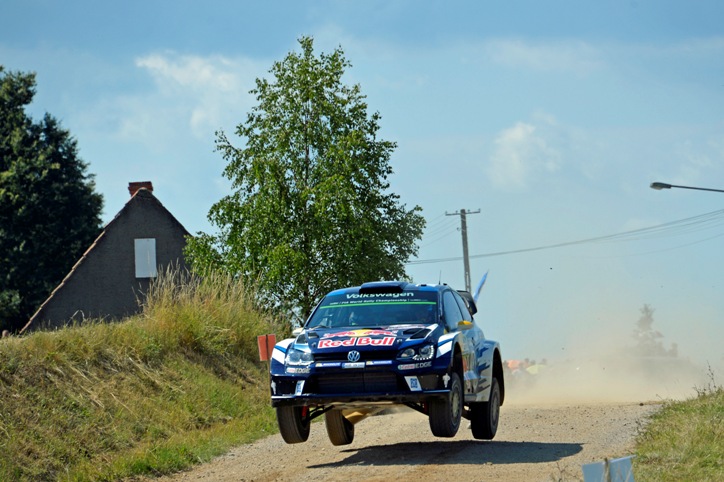 Average 134.58 km/h – rapid Shakedown a taste of things to come at Rally Poland

Perfect preparation for the high-speed challenge ahead: Volkswagen started the Rally Poland with top times in the Shakedown. Sébastien Ogier/Julien Ingrassia (F/F) in the Polo R WRC set the fastest time ahead of the seventh round of the FIA World Rally Championship (WRC). Their team-mates Andreas Mikkelsen/Anders Jæger (N/N) were second-fastest, just one tenth of a second off the leading time.

Jari-Matti Latvala/Miikka Anttila (FIN/FIN) ended the World Rally Championship’s equivalent of “free practice” in sixth place. The 3.6-kilometre route to the northwest of the service park in Mikolajki saw the world rally cars from Wolfsburg achieve an average speed of 134.58 km/h – and offered a genuine taste of things to come at the Rally Poland.

The Rally Poland kicks off the WRC speed weeks. The race in the Warmia-Masuria region of Poland and the Rally Finland in four weeks’ time are the fastest to events on the calendar. The Volkswagen Polo R WRC has so far contested five of these high-speed rounds, with the 318-hp four-wheel drive powerhouse from Wolfsburg winning all five.

Quotes after the Shakedown at the Rally Poland

Sébastien Ogier, Volkswagen Polo R WRC #1
“For me, this is the first rally as a new father. Perhaps that will give me an extra boost of motivation. Whatever happens, the Shakedown went very well for us. I feel very comfortable in the Polo. Julien and I are very well prepared. I really like the profile of the route at the Rally Poland: the quick stages are spectacular and it is incredible fun to drive on them. It is a challenging event, especially for the engine, because we have such long sections at full throttle. However, I trust our engineers 100 per cent, so I go into the race full of optimism.”

Jari-Matti Latvala, Volkswagen Polo R WRC #2
“In principle, it was a good shakedown and our Polo felt good. However, the times were not as quick as those of my rivals at first. For this reason, we tried out a few things with the set-up. The longer the Shakedown went on, the worse the conditions became out on the route. This was reflected in the times. It certainly showed how evenly matched the drivers are. The weather could also be a key factor at this rally. The main thing is to have a good feeling – and I have that.”

Andreas Mikkelsen, Volkswagen Polo R WRC #9
“The transition from the Rally Italy on Sardinia to the Rally Poland could not be greater. You really have to put your foot down, be brave, and drive very precisely here. The Shakedown was a superb preparation for what awaits us over the coming days. We wanted to do a few more kilometres today, to get used to the conditions. I think we managed that. It is fantastic to tackle these lovely gravel roads in Poland at rally speed.”

Jost Capito, Volkswagen Motorsport Director
“Speed, speed, speed – that is the key at the Rally Poland, and the Shakedown was a good preparation for the main topic of the weekend. It may only have been short, but it was really quick, with an average speed of over 130 kilometres per hour. It was a good taste of things to come over the coming days, although the weather could be unsettled. That might suit us. Whatever happens, we are well prepared and looking forward to the Rally Poland.”

And then there were …
… good friends, bitten by the football bug. Mechanics José Azevedo and Marcin Wojcik are not only jointly responsible for the Polo R WRC of Jari-Matti Latvala and Miikka Anttila, but, given their nationalities, they are also both full of anticipation ahead of the quarter-final of the European Championships, which kicks off at 21:00 in Marseille.

Car Chief Azevedo naturally has his fingers crossed for his native Portugal, while Polish Wojcik will be cheering on the Poles. The clash has already been played out on the table football table (the result is top secret), and the pair will sit down to watch the football together this evening. The battle of the chief mechanics for the other two cars, Martin Hassenpflug and Yari Mischinelli, sees Germany take on Italy on Saturday.