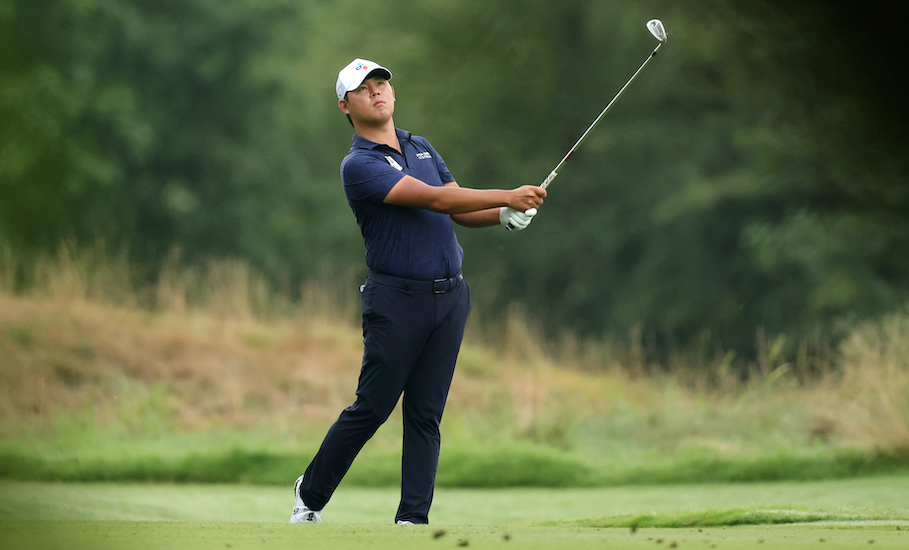 Korean star Si Woo Kim saved his best for last with a hole-out eagle to share the first round lead with American J.J. Spaun on 8-under 62 at the FedEx St. Jude Championship, the first of three FedExCup Playoffs event, on Thursday.

The 27-year-old Kim, who withdrew from the final round of the Wyndham Championship last weekend due to illness, was in sizzling form at TPC Southwind in Memphis where he capped his day by sinking a 168-yard approach at the par-4 18th hole with an 8-iron in a round that featured seven other birdies and a lone bogey.

“Full swing with an 8-iron. I had good impact and it went in,” said Kim of his closing eagle which earned him only his second 18-hole lead/co-lead on the PGA TOUR.

He is hoping to become the fourth Korean golfer to win this season and the second successive following young compatriot, Joohyung “Tom” Kim’s victory at the Wyndham Championship on Sunday.

A mid-round decision to change his putting grip paid off handsomely as Si Woo powered home for an inward 28 to mark a career-low nine-hole score and first-ever sub-par round at TPC Southwind in seven rounds. It also eclipsed the course back nine low score by one stroke.

“I think I had a pretty good start which made me comfortable playing the round,” said Kim, who started his day with a pair of birdies on Hole Nos. 2 and 3 before dropping a bogey at the next hole. “The putting didn’t work out well on the front nine. I was not very comfortable with the grip so without any worries, I changed the grip before getting on to the back nine. That was the turning point. I earned confidence from making some more birdies on the back nine.”

Making his seventh start in the FedExCup Playoffs where his best finish was 17th in 2016 – the only year he qualified for the TOUR Championship, Kim, who is currently ranked 48th, knows he has three more weeks to turn his 2021-22 campaign into a memorable one. He is also fighting to make the International Team for the Presidents Cup after featuring in 2017.

“It was decent. I didn’t have any big moments but overall it wasn’t bad at all. I have ranked mostly in the top-20s compared to other seasons and I think I have played consistently. I’m a bit worried since I didn’t have any wins but I will try to do my best during the Playoffs,” said Kim, a three-time TOUR winner where his last victory was the 2021 The American Express.

Kim’s fellow compatriots, K.H. Lee and Tom Kim also enjoyed fast starts with rounds of 64 and 66 respectively to be tied fourth and 18th respectively. Other Asian players in the FedExCup Playoffs, Korean Sungjae Im, India’s Anirban Lahiri and Chinese Taipei’s C.T. Pan, carded scores of 70, 71 and 73 respectively to leave themselves with plenty to do in the second round on Friday. Japanese star Hideki Matsuyama withdrew from the tournament on Wednesday due to a neck injury.

The top-70 ranked golfers in Memphis will progress into next week’s BMW Championship, where the field will be further reduced to 30 players for the season-finale, TOUR Championship. The PGA TOUR’s ultimate prize, the FedExCup, will be awarded in Atlanta where the winner will also earn US$18 million.

Lee, ranked 40th entering the week, traded seven birdies against a bogey, and attributed his short game accuracy and putter for his solid start. “I had decent round overall. My wedge, iron and putter was good. I think I can play with joy if it continues like this,” said the two-time TOUR winner.

“I worked really hard with the putter which made results like today. Also my iron shots were good which made putting easier. I want to stick to what I have done so far. This course is narrow and rough is hard. I need to have good tee shots. I think tee shots are critical here.”

Tony Finau, who won the 3M Open and Rocket Mortgage Classic back-to-back last month, is amongst those who carded 64s while current FedExCup No. 1 and World No. 1 Scottie Scheffler returned a disappointing 71.

Weather: Light rain in the morning with chance of afternoon showers. High of 88. Wind NNE 6-12 mph.