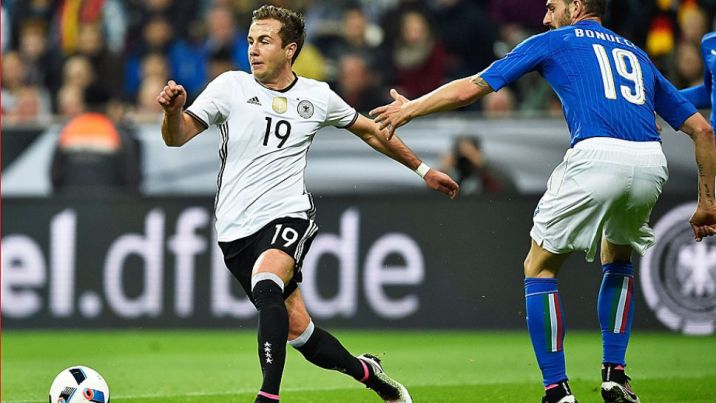 Joachim Loew’s Germany face the acid test of their status as world champions against Italy on Saturday in the Euro 2016 quarter-finals.

The facts speak for themselves: Germany have never managed a win over the Azzurri in eight attempts on the big stage at either a World Cup or European Championship finals.

It’s a record German fans would love to see broken.

They have suffered recent disappointment at Italian hands in the semi-finals of both the 2006 World Cup finals and Euro 2012.

And although Germany thumped Italy 4-1 three months ago in Munich — the first time they had defeated the Azzurri in nearly 21 years — Loew knows that will count for little this weekend.

“We might have beat them in the friendly (in March) but I know the Italians. They recover well from friendly defeats and when it comes to big competitions they become really united,” he said.

The clash in Bordeaux is die Mannschaft’s first key test on the big stage since Mario Goetze’s volley won the World Cup final in Rio two years ago.

Reaching the last eight in France means Loew is in no danger of being relieved of his duties through to the 2018 World Cup finals, when his current contract expires.

But there have been rumblings of discontent from the German media in the two years since Loew’s team were crowned world champions.

Another failure to beat Italy when it matters will be hard to swallow for German fans now used to success.

The truth is Germany failed to sparkle in qualifying for France and have only rarely impressed in the two years since Brazil.

They suffered uncharacteristic away defeats to Poland and the Republic of Ireland in qualifiers.

While Germany hit the ground running in Brazil with a 4-0 rout of Portugal, they eased themselves into their Euro 2016 campaign.

A 2-0 win over Ukraine and goalless draw with eventual quarter-finalists Poland saw them squeeze 1-0 past Northern Ireland.

The Germans moved up a gear with an impressive 3-0 win over Slovakia in the last 16 as Jerome Boateng, Mario Gomez and Julian Draxler netted.

A major part of Loew’s talent is the knack of knowing when to persevere with, or leave out, a big name.

Against Slovakia, Draxler was promoted at the expense of Goetze, who has struggled in France.

Goetze’s lack of form is no surprise after two years spent largely on the bench at Bayern Munich under Pep Guardiola.

As Goetze did in the Rio final, Draxler seized his chance against Slovakia with a well-taken volley.

Likewise, Gomez has been brought back into the Germany fold having barely had a look in since Euro 2012.

His goal in March’s 3-2 friendly defeat to England in Berlin was his first in four years at international level.

But he finished last season as the Turkish league’s top scorer on loan at Besiktas with 26 goals.

His goals against both Northern Ireland and Slovakia in the last two games are the confidence booster he needs before facing Italy.

Likewise, Loew has gambled by holding back captain Bastian Schweinsteiger.

He was restricted to three cameo appearances off the bench, despite a goal with only his third touch in the opening win over Ukraine.

Few German fans would bet against Schweinsteiger, who has not played 90 minutes of football since January after a knee injury, starting against the Azzurri.

Germany have the enviable record of being the only team at Euro 2016 yet to concede a goal.

After two years of experimenting, Loew has finally settled on a right-back after the highly influential Philipp Lahm retired in 2014.

Joshua Kimmich, 21, has capped his first year at Bayern Munich by also forcing his way into the national side.

Likewise, Cologne’s Jonas Hector has settled another problem position for Loew by making the left-back berth his own.

The big challenge in Bordeaux for Germany’s forwards, and Gomez in particular, is to unlock Italy’s ‘BBC’ defence.

Gomez has a habit of letting his head drop if things are not going his way.

And Andrea Barzagli, Leonardo Bonucci and Giorgio Chiellini will give up few chances in front of Italy’s legendary goalkeeper Gianluigi Buffon.

The litmus test will come should Germany fall behind.

Then Loew’s side must show the composure to fight back to break their Italian curse — or again fail to beat the Azzurri. – Agence France-Presse