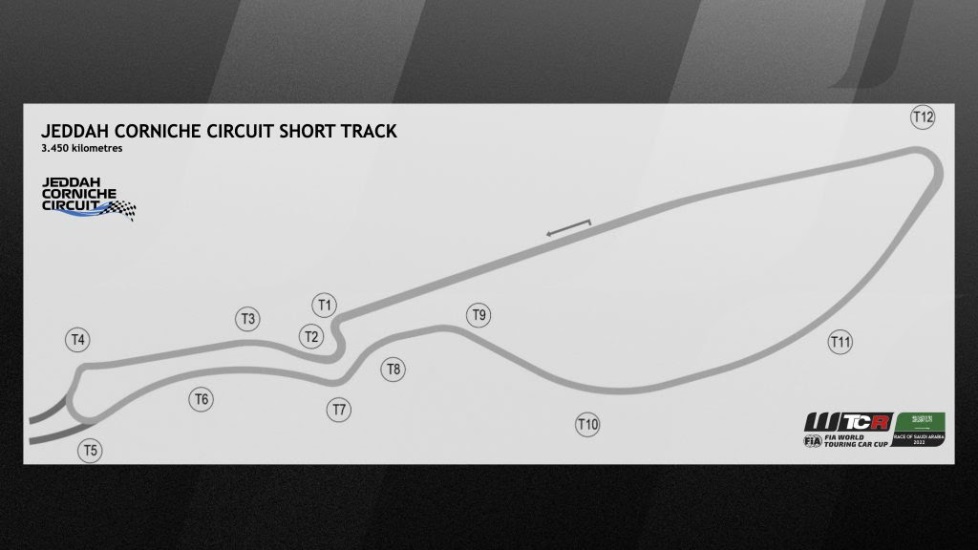 It will be double history time for the drivers from the all-action WTCR − FIA World Touring Car Cup at Jeddah Corniche Circuit next week.

As well as taking part in Saudi Arabia’s first world-level touring car race from November 25-27, the WTCR stars will be the first to try out the newly-completed Short Track at the spectacular Red Sea venue, which has hosted the FIA Formula One World Championship since 2021.

Connecting Turn 4 to Turn 20 from the Full Track, the new layout forms an exciting, 12-turn circuit measuring 3.450 kilometres in length.

The Short Track essentially takes drivers from the exit of Turn 3 towards the Turn 4 left-hand corner. But instead of continuing to Turn 5 on the Full Track, drivers dive right and head through to a sweeping hairpin turn, before accelerating towards Turn 6 and then onto the left-hander at Turn 7.

As part of the track changes, additional safety measures have been incorporated, including the re-positioning of safety fences at Turns 8 and 10 on the Short Track. Changes have also been made to kerbing with beveled concrete kerbs installed at Turns 4, 8 and 10.

These kerbs have the same profile as the original kerbs but the transition at the back towards the run off is flush with the surface rather than a drop in the surface. Meanwhiile, additional Tecpro safety material has been added to the barriers at Turn 11.

Jean-Baptiste Ley, WTCR Director, Discovery Sports Events, said: “The opportunity to bring the WTCR − FIA World Touring Car Cup to a fantastic, state-of-the-art venue and to a country with huge enthusiasm for motorsport is very exciting for the series. Our drivers and teams would like to thank the Saudi Arabian Automobile and Motorcycle Federation and Saudi Motorsport Company for their strong support and warm welcome. The work to homologate an alternative 3.450-kilometre track, which is tailor-made for FIA World Touring Car racing, was no small undertaking and we are convinced this layout will only enhance the spectacle on offer. Racing between the walls and under floodlights at night is something new for the WTCR and something we can’t wait to experience. We have no doubt that WTCR Race of Saudi Arabia will be remembered for years to come.”

Martin Whitaker, Chief Executive, Saudi Motorsport Company, said: “I am extremely excited to welcome drivers, teams and everyone involved with the WTCR − FIA World Touring Car Cup later this month as the series visits Saudi Arabia for the first time. It also offers an exciting opportunity to see our new, shortened, state-of-the-art FIA Grade 3 homologated track at the Jeddah Corniche Circuit make its debut for what is bound to be an exhilarating season finale.”

WTCR Race of Saudi Arabia forms the deciding rounds of the 2022 WTCR − FIA World Touring Car Cup. The event also brings the curtain down on the series after five seasons and 108 races.

Following Qualifying from 18h30 local time on Saturday November 26, Race 1 is set to start at 19h45 on Sunday November 27 and is scheduled to thrill fans for 30 minutes plus one lap. Race 2 is due to begin at 22h15 with drivers in action for 25 minutes plus one lap. The winners of the WTCR − FIA World Touring Car Cup for Drivers and Teams will be decided during the weekend. Click HERE for the provisional standings after 16 rounds.

Tickets are now on sale at https://tickets.saudimotorsport.com/en. Ticket prices are 50 SAR for the full weekend, while children 10 and under go free.