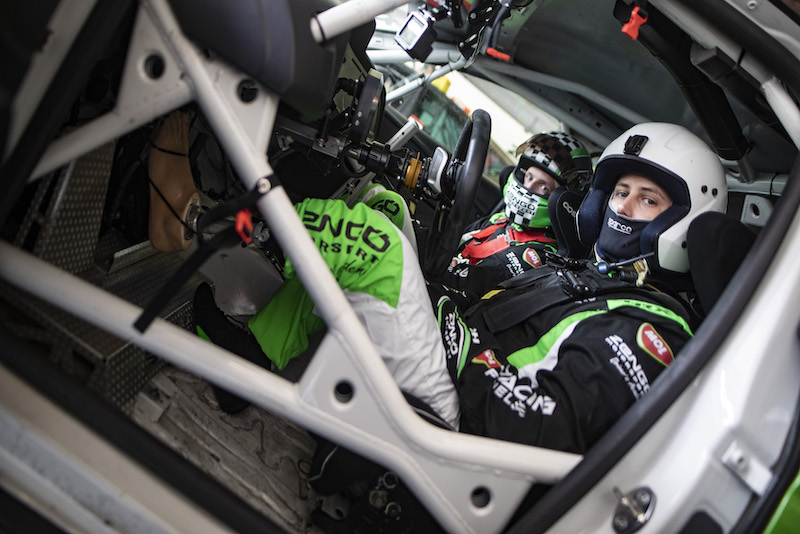 *Zengő Motorsport and Bence Boldizs give Attila László the drive of his life at Hungaroring *With a prosthetic limb fitted, volunteer completes 17 laps of FIA WTCR Race of Hungary venue *László: “Despite all my preliminary fears, I was able to press the brake pedal with enough power with my left leg during the entire test and I kept my right foot only on the throttle”

Two years ago, Attila László, a volunteer marshal, lay seriously injured in the Hungaroring pitlane. He’d been inadvertently struck by a DTM car as it stopped for a tyre change in wet conditions.

It was a freak accident but, despite the best efforts of medics, László’s left leg could not be saved and had to be amputated below the knee.

While the events of 3 June 2018 changed László’s life forever, they didn’t change his love for motorsport and actually reminded him of a target he set as a child: to one day drive a racing car.

A Q&A with Attila László, who is 31 and from Budapest, appears below:

What previous experience of driving a racing car did you have?
“Before the test I had a few chances to sit in racing cars, but only as a passenger. I could experience race conditions by driving simulators and competing in go-karts.”

Who made the test possible?
“The test was organised by the Zengő Motorsport team, led by Zoltán Zengő. They’ve heard about my dream, and after seeing me returning as a marshal in 2019 [at WTCR Race of Hungary] and, even after my accident, being dedicated to motorsports, they decided to realise this dream.”

Can you describe the test in terms of the overall experience, the emotions you felt and the challenge you faced?
“Sometimes I still catch myself daydreaming, thinking back to the moment I was sitting there behind the wheel of a CUPRA TCR and getting the signal to start, then rolling out slowly in the pitlane and driving onto the track. I was driving so slowly in the first few corners that I could have done it faster with a street car. The biggest challenge was overcoming my own thoughts, because before the test I was afraid of using the brakes, because according to my plans, as the pros do, I wanted to brake with my left foot, but I knew that to get the correct braking force I had to press the brake pedal very hard. I wasn’t sure I could achieve this with the prosthesis.

“The Zengő team widened the brake pedal and attached my prosthesis to it. So, if I couldn’t press the brake with the prosthesis or if something unexpected happened, there would be room to use my right foot as well. It was necessary to attach my prosthesis to the pedal to avoid involuntary movements because of the g-forces in the corners.

“Despite all my preliminary fears, I was able to press the brake pedal with enough power with my left leg during the entire test and I kept my right foot only on the throttle. After a while, I got more focused and could also get some energy to experience the moment, the forces that affect the driver during the acceleration, in the turns and during the braking.”

How many laps did you complete?
“I completed two 30-minute sessions and during these two sessions I completed 17 laps.”

Did you have any spins or scary moments?
“On the briefing before the test we have discussed that this test is not about beating lap times, it was only about the experience, the feeling of driving a race car. During the test I had by my side the new WTCR driver of Zengő Motorsport, Bence Boldizs. Following his instructions, we had safe long braking distance in all corners, but even in this way I’ve had a scary moment in the Turn 11, when I could feel what it means the cold rear tyre. But with a fast counter-steering movement I could control the situation. Without leaving the track, we could successfully continue the lap.”

Do you have plans to try to race or do more testing?
“I would be really happy to do more testing, and if I would have the opportunity, I would love to try racing, so I’m open to any chance of driving a race car again.”

Finally, what do you do when you are not testing racing cars?
“I worked as a graphic designer before my accident, but when I got back to work after the rehabilitation period, I didn’t feel full about my life. Then I tried para teqpong and I fell in love with it. The company was just looking for an animator so I chose a sports life instead of my old usual job and currently I have the mission of introducing para teq sports to the world as an animator.”