Home International Williams closes in on the title in Stockholm 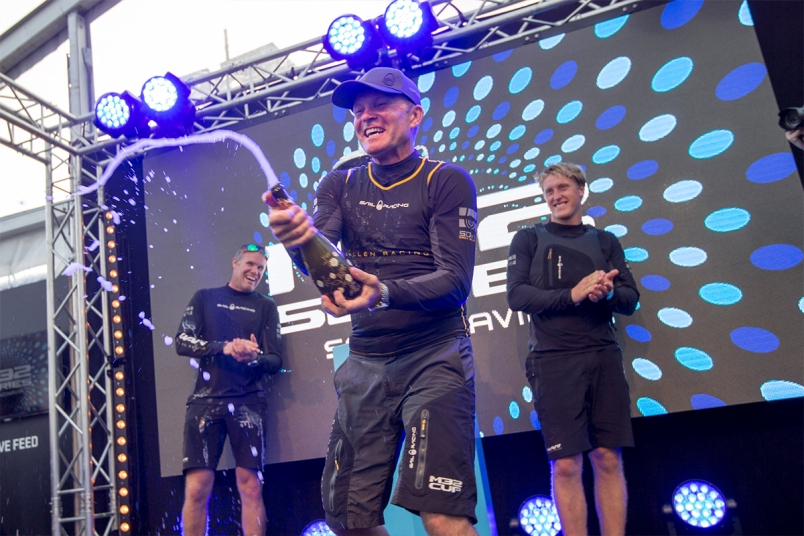 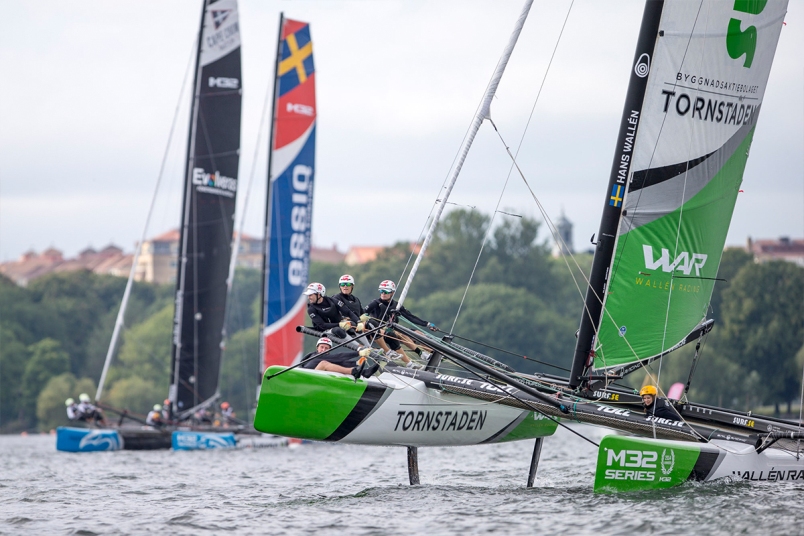 Pindar continue to master the light winds on Riddarfjärden in Stockholm. Ian Williams extended the gap to their Swedish rivals on the scoreboard but Dackhammar and Wallén still have a chance to steal their thunder as double points come in to play during the final racestomorrow.

The breeze continued to be shifty in Stockholm but the temperature is rising as the final of M32 Scandinavian Series 2016 draws to a climax. The six-time match racing World Champion Ian Williams lead his team to a comfortable win in the first race of the day. In the second race they came back from fifth to second place at the finish while their main contenders for the series title Essiq Racing were over the start line early and struggled to recover.

And Dackhammar’s rough day continued. In race three they recovered from the back of the fleet to being first over the line. But the umpire gave them a penalty for not keeping clear of Hans Wallén at the last mark rounding and instead they had to settle for fifth place. A win in race four was a small consolation but in race five they lost the win to their rivals on GAC Pindar.

“There have been a lot of ups and downs for many teams today but we haven’t had luck on our side. Still, we feel strong and we can’t control how other teams perform buttomorrow we will give all we can to end up on top of the leaderboard here in Stockholm.” said Nicklas Dackhammar.

Olympic veteran Hans Wallén was hungry for top results and lead the last two races of the day from start to finish. Wallén Racing won the day and are currently second on the leaderboard, seven points behind Williams.

“It’s been a fun day and we are very happy to be the top team today. I have great support from the team and our tactician Keith Swinton. We work really well together and It feels like we are strong contenders to win this regatta.” said Wallén.

Double points are at stake in tomorrow’s finals and that still gives Essiq Racing a chance to grab the series title if they perform at their best and GAC Pindar ends the regatta badly. But Williams looks strong and has a golden opportunity to win the M32 Scandinavian Series 2016 if he stays out of trouble.

”We always knew it was going to be difficult with southerly winds like we had today on this arena and it was just one of those days where you had to hang in there. We are happy to be second overall for the day and sure, it looks good for us on the leaderboard. Seven points is a nice cushion but it’s much too soon to call it and with double points that could be erased quickly tomorrow. We certainly have to stay on our toes.” said Williams.

M32 Series Scandinavia Stockholm takes place on Riddarfjärden in the centre of Stockholm City and the Race Village can be found at Norr Mälarstrand. Racing resumes at 2.00 pm local time tomorrow with finals at 3.30 pm local time.