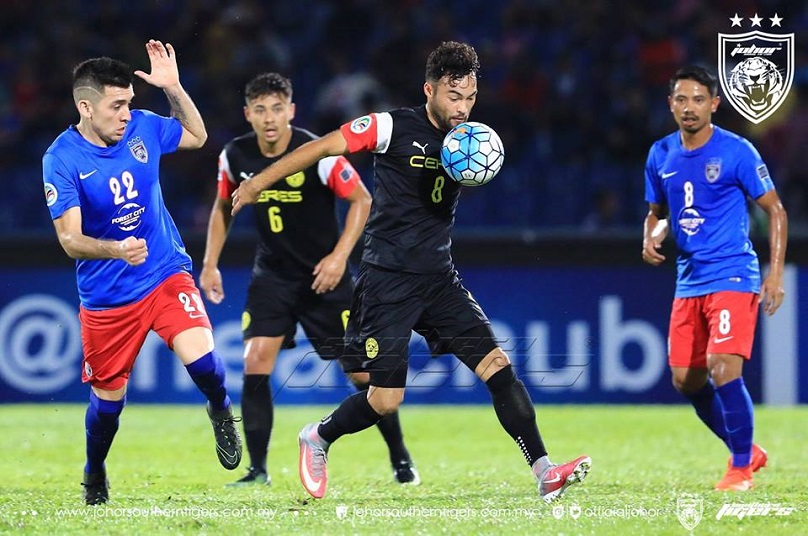 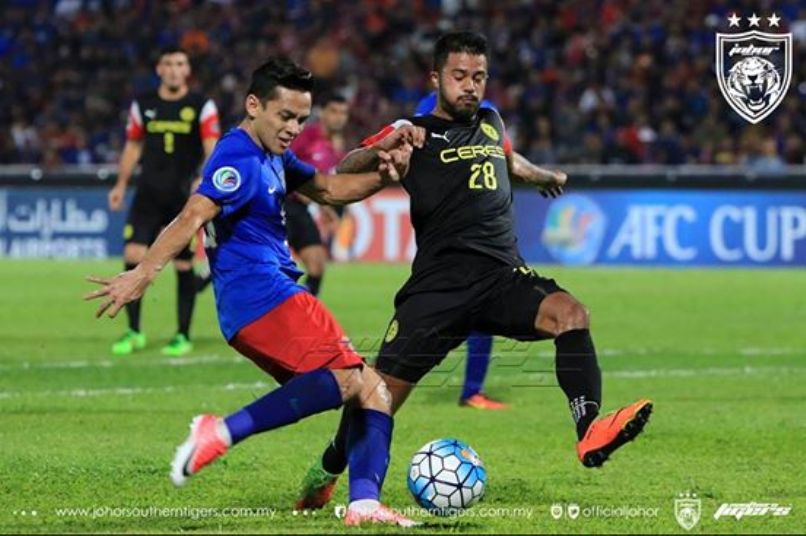 # Ceres have two away goals in return-leg in Bacolod City
By Rizal Abdullah
Johor Darul Takzim have a mountain to climb in the return-leg after their narrow 3-2 win over Ceres Negros of the Philippines in the first-leg 2017 AFC Cup Asean Zonal semi-final at the Larkin Stadium in Johor Bahru on Wednesday.
The two away goals by Ceres Negros gives the Philippines outfit an even chance in the May 31 return-leg in Bacolod City while JDT will have to tighten up their backline marshalled by their towering Brazilian Marcos Antonio.
JDT looked set to ride on their 18th minute opening goal by midfielder Gonzalo Cabrera. Instead, Ceres were 2-1 up by the 25th minute after cancelling out the deficit on 18 minutes when Fernando Rodriguez sent a diving header into the JDT net from a cross by Joe Porteira on the right.
Cabrera gave the home fans plenty to cheer when he picked up a pass from Gabriel Guerra and finished it off with a delightful right footer from the top of the box which goalkeeper Roland Muller was not able to stop from hitting the back of his net.
After conceding the equaliser JDT were stunned by Ceres Negros in the 25th minute. JDT goalkeeper, who was booked for delaying late in the second half, was well beaten by Bienvenido Marnon’s rising right footed shot from outside the box following an assist by Kevin Ingreso.
Once again JDT’s influential midfielder and former international Safiq Rahim came to his team’s rescue when raced into space to plant home a power packed header from a Fazly Manan assist.
The 2015 AFC Cup champions had their home fans celebrating in the 68th minute. Hazwan Bakri got his name into the scoresheet with a big dose of luck when he side-stepped and turned to hit a left footed attempt which took a deflection and caught Roland Muller stranded as the ball rolled into the his net.
The winner of the JDT-Ceres Negros tie will play the winner of the Global FC (Philippines) versus Home United (Singapore) tie in the Asean Zone final.
Home United held Global FC to a 2-2 draw in the first-leg semi-final in Manila on Tuesday.
RESULTS ASEAN ZONE (SEMI-FINALS, FIRST-LEG)
Wednesday (May 17)
JDT (Mas)   3    Ceres Negros (Phi)    2
Tuesday (May 16)
Global FC (Phi)   2    Home United (Sgp)   2