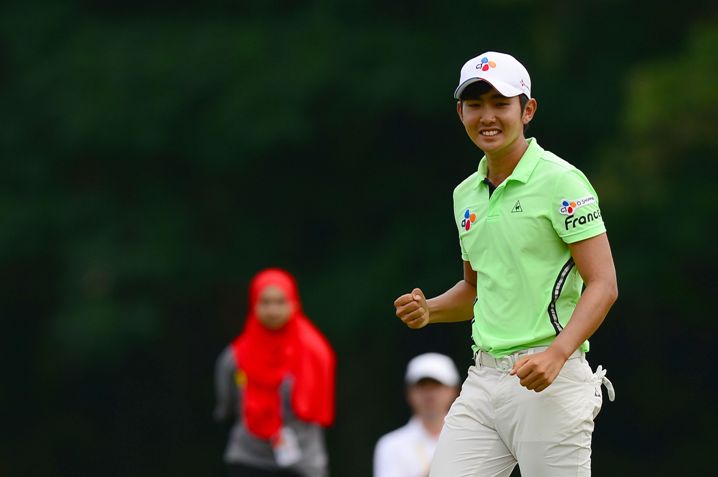 If legends K.J. Choi and Y.E. Yang were flag bearers for Korean golf over the past decade or so, Jeunghun Wang and Soomin Lee (main pix) are now quickly emerging as new rising stars from the Land of Morning Calm.

Wang, 20, claimed a stunning play-off victory at the Hassan II Trophy in Morocco on the European Tour on Sunday, just two weeks after Lee, who is two years older, enjoyed a maiden professional triumph in China.

As with Choi and Yang, both Lee and Wang are close friends and have cut their professional teeth on the Asian Tour over the past few seasons, showing great promise along the way that their peers have predicted one of them could go on to win a Major championship.

A few hours after his victory, which saw him birdie the 18th hole three times to fend off Nacho Elviraof Spain, Wang tweeted:

“I am so happy now!!! Finally won Trophee Hassan event in Morocco on @europeantour. Thank you @asiantourgolf for building my career!”

The slender Wang grew up playing amateur golf outside his native home when his family moved to the Philippines when he was boy as it was cheaper to play and practice in Manila, in which he subsequently won several junior events.

After turning professional at 17 and surviving trips to Qualifying School in 2013 and 2014, Wang went about quietly to stamp his mark on the Asian Tour and did not miss a single cut in 2014 through 16 events, which included a heart-breaking second place finish in Dubai.

Last year, Wang blossomed further in his burgeoning career to finish an impressive ninth on the Order of Merit following another highly consistent season with three top-10s and eight top-20s. He was later picked as a wild card by Team Asia captain Jeev Milkha Singh to play in the EurAsia Cup in Malaysia against Team Europe.

Singh, a former two-time Asian Tour number one, was so impressed by Wang’s ball-striking ability that the Indian legend predicted the Korean could go on to emulate Yang’s Major heroics in the near future.

Reigning Asian Tour Order of Merit champion Anirban Lahiri requested to play with Wang in the Fourball at the EurAsia Cup. The Indian ace tweeted on Monday:

With four top-10s already on the Asian Tour this season plus his breakthrough victory in Europe, Wang is tipped to break into the top-90 of the latest Official World Golf Ranking when it is released later on Monday.

“The past few weeks have been wonderful for the Asian Tour.  It started with Soomin Lee winning his first European Tour title in China three weeks ago and now we have Jeunghun Wang lifting the Hassan II Trophy in Morocco on Sunday,” said Han.

“Both young players have matured beyond their years over the past few seasons on the Asian Tour and it goes to show that we have the platform to enable our members to compete and win tournaments in Asia and around the world.

“I would like to congratulate Wang and Lee for their tremendous achievements and I will not be surprised if they go on to enjoy great careers very much like how Choi and Yang have blazed the trail for Korean and Asian golf over the past decade.

“Both Wang and Lee are very young and talented players and compete without any fear. It is very exciting to watch these young players emerging on the Asian Tour and I’m sure their careers are now just starting to flourish.”

Baby-faced Lee, who regularly practices with Wang when they are on Tour, enjoyed a superb rookie season in Asia in 2015 where he posted two top-three finishes including at the UBS Hong Kong Open.

At the start of 2016, he endured the disappointment of throwing away a lead at the Maybank Championship Malaysia where he dropped two double bogeys in his last three holes to settle for joint second place before bouncing back to win the Shenzhen International on the European Tour.