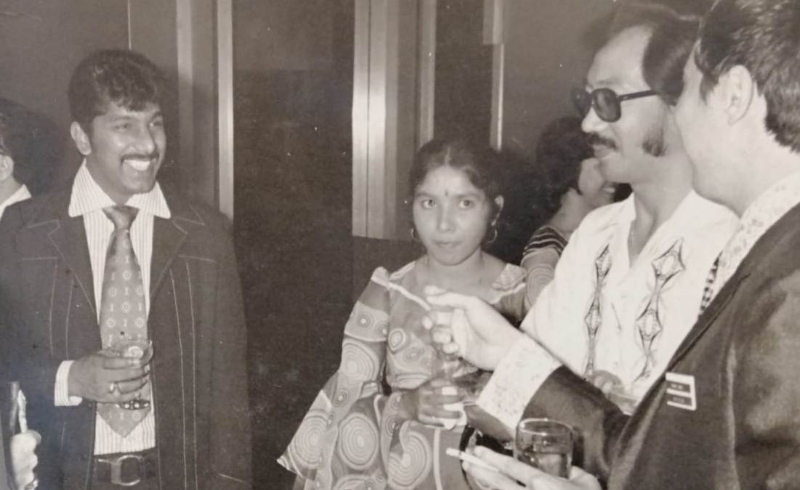 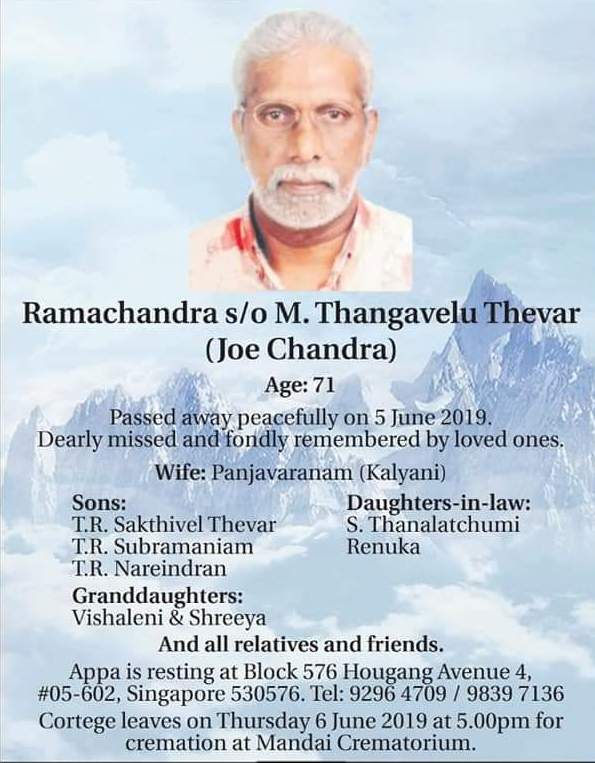 IN the 1970s, there was a very long queue of quality football strikers fighting their way to play for Singapore. Sometimes, even the little-known ones, with talented dribbling and scoring skills just found themselves on the sidelines.

Ramachandra was a soft-spoken lad who was raised in the sacred football heartlands of Farrer Park. He made his name on the regional scene when he starred for Singapore Indians in the Bardhan Cup (organised by Malaysian Indians) as lead scorer and also for Jollilads, then one of the feared National Football League (NFL) clubs.

He was regularly praised as a “honest, quiet striker who never gloated of his power-packed shots”. But he patiently waited his biggest chance to play for the Lions, which eventually came when Englishman coach Michael Walker handed him the national jersey in the mid-1970s. He did not disappoint whenever he wore the iconic striker’s jersey.

Ramachandra, also known as Joe Chandra, passed away on Wednesday after multiple illness. He leaves behind wife,  Panjavaranam (Kalyani) and three sons T.R. Sakthivel Thevar, T.R. Subramaniam and T.R. Nareindran. He would have been 71 on July 13.

His eldest son Sakthivel, 42, says his late dad just celebrated his “really big 70th birthday” in July last year. He says: “Typically a very strict Indian father but he was always my role-model and I always wanted to be like him, a sportsman with tremendous fighting spirit and always giving his very best shot in whatever he did.” 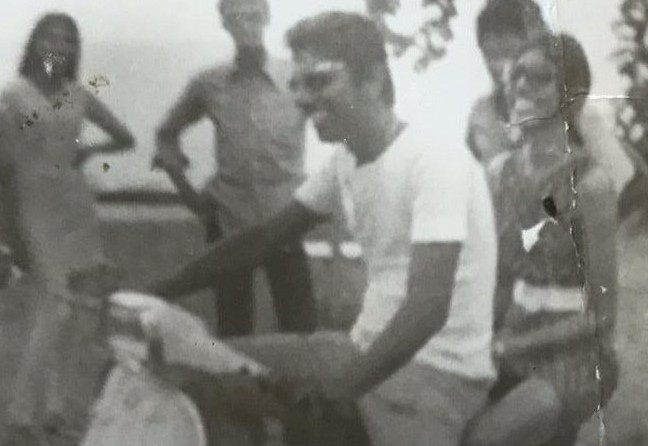 Sakthivel, a fomer SAF Commando Ranger who now does senior management work with Great Eastern Life, says he saw the “cooler lighter side of dad after his marriage…and we became very best friends…he offered me wonderful advice on familyhood”.

He says his late dad’s lifestyle took a major turn three years ago, when he had a “clumpsy fall with a serious knock on his head, which severely affected his overall personality”. Sakthivel adds: “But he seldom complained, although he looked agitated at times, and we knew he was silently fighting the pain with a further multiple of other illnesses.”

Former Malaysia Cup skipper-midfielder  and ex-Lions coach Seak Poh Leong, with 56 international “A” caps from 1971-76, says: “Ramachandra was a real striker, no fanciful stuff, just looking for the net, straight forward and, most importantly, I remember him as a honest person.” For the record, Poh Leong, following an 18-month training stint in West Germany, was the first professional football coach in August 1984.

Rajagopal Suriamurthi, arguably one of the region’s best midfielders who played for Pahang and Lions in the 1980s and 90s in the Malaysia Cup, recalls Ramachandra when he was 15 years. He says: “I adored him as he was a beast of a striker, with powerful physique and special aerial ability to score from headers, too.

“Rama grew up in Roberts Lane in Little India and I enjoyed watching him train diligently at Farrer Park as a 15-year-old schoolboy and later played with him for Singapore Indians. He was an absolute football character, soft-spoken but with strong football attributes.”

Former Singapore Indian Football Club President V.P. Jothi recognises the “explosive penalty-area strengths” of Ramachandra. He says: “He caught the eye of Michael Walker because he was deadly in the penalty-area. I vividly remember how he deftly chests the aerial balls and instantly lets fly with a volley, which ends up, most times, at the back of the net.”

Jothi, who is the current Vice President of Singapore Indian Association along Balestier Road, adds: “Rama was a good role-model to the younger generation of Indian lads and with his sprinter-like attributes, his speed was extraordinary. Not to mention, his physical attributes that makes him stand out like Malcolm Macdonald (former huge-sized England striker of the 1970s, nicknamed ‘Supermac’, who also played for Fulham and Newcastle).”

John Fernandez, former Singapore defender from Singapore Cricket Club, praises: “He was truly a quality striker, always dangerous in front of the goal-mouth. A good poacher and awesome player who packs powerful shots to worry any goalkeeper.  What a loss to the football fraternity. May his soul rest in peace.” 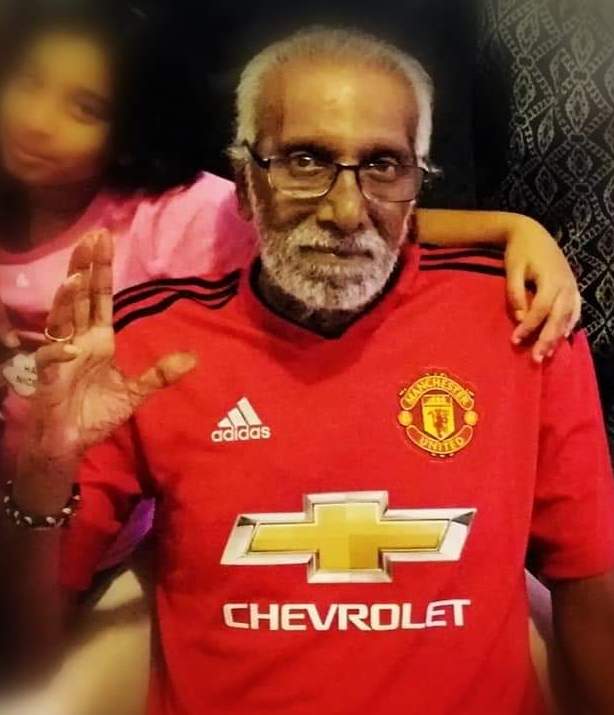 John’s younger brother Simon Fernandez, who was one of the few St Joseph’s Institution (SJI) stalwarts to play in the Malaysia Cup, says: “I grew up in Farrer Park, the legendary football arena from the 1950s onwards and I recollect Rama, six years my senior, working out even on his own, in footwork, shootings and headers in the evenings. He was adoring as a stylish and tricky footballer. Good with both legs. He stands out in my mind because he was very humble and hardworking.”

Former FAS technical director P.N. Sivaji (2004-2007), now a technical director with a Myanmar-based pro club Hantharwardy United, says: “Ramachandra worked his butts out to reach national level. He was a reliable perfectly-built striker, strong and sharp in front of goal. We played together for Singapore Indians FC in the Bardhan Cup. And against each other when I played for Junior Athletic (JAA) from Naval Base, Sembawang and Rajaji Sports Club. His proudest moment in football may have been when Michael Walker rightly recognised his striker-talent in the early 1970s to give him his international caps.”

Award-winning former national coach Jita Singh, who was SNOC 1981 ‘Coach of the Year’, moaned he was “deeply saddened by Ramachandra’s death”. He says: “He was a domineering player like a Romelu Lukaku (Belgium’s Manchester United striker), strong, speedy and he could hold the ball well, too. But he impressed a lot more with his friendly and humble demeanour off-the-field. I will remember him as a very good team-player. My condolences to his family.”

Ramachandra was with the Port of Singapore Authority (PSA) Police as a non-commissioned officer, says former FIFA referee T. Rajamanickam, a childhood friend from Farrer Park. “I will never forget the days when we kicked balls together, socialised and remained as family friends. He later worked for an American company as an administration executive. Later in life he helped in his father’s textile business and in his later years did a number of freelance jobs. A very sincere and caring buddy.”

Football die-hard fan A. Thiyaga Raju hails his late brother-in-law as a “prolific singer who could capture anyone’s attention when he holds the microphone”. He says: “My late brother was married to his late sister the same month Singapore won the Malaysia Cup in 1977. Aside from football, Rama was a natural entertainer, a home-entertainer. He was a crooner dishing out old Tamil numbers. His favourite song was “Chinna Maamiye” and he used to entertain family and friends during Deepavali.” 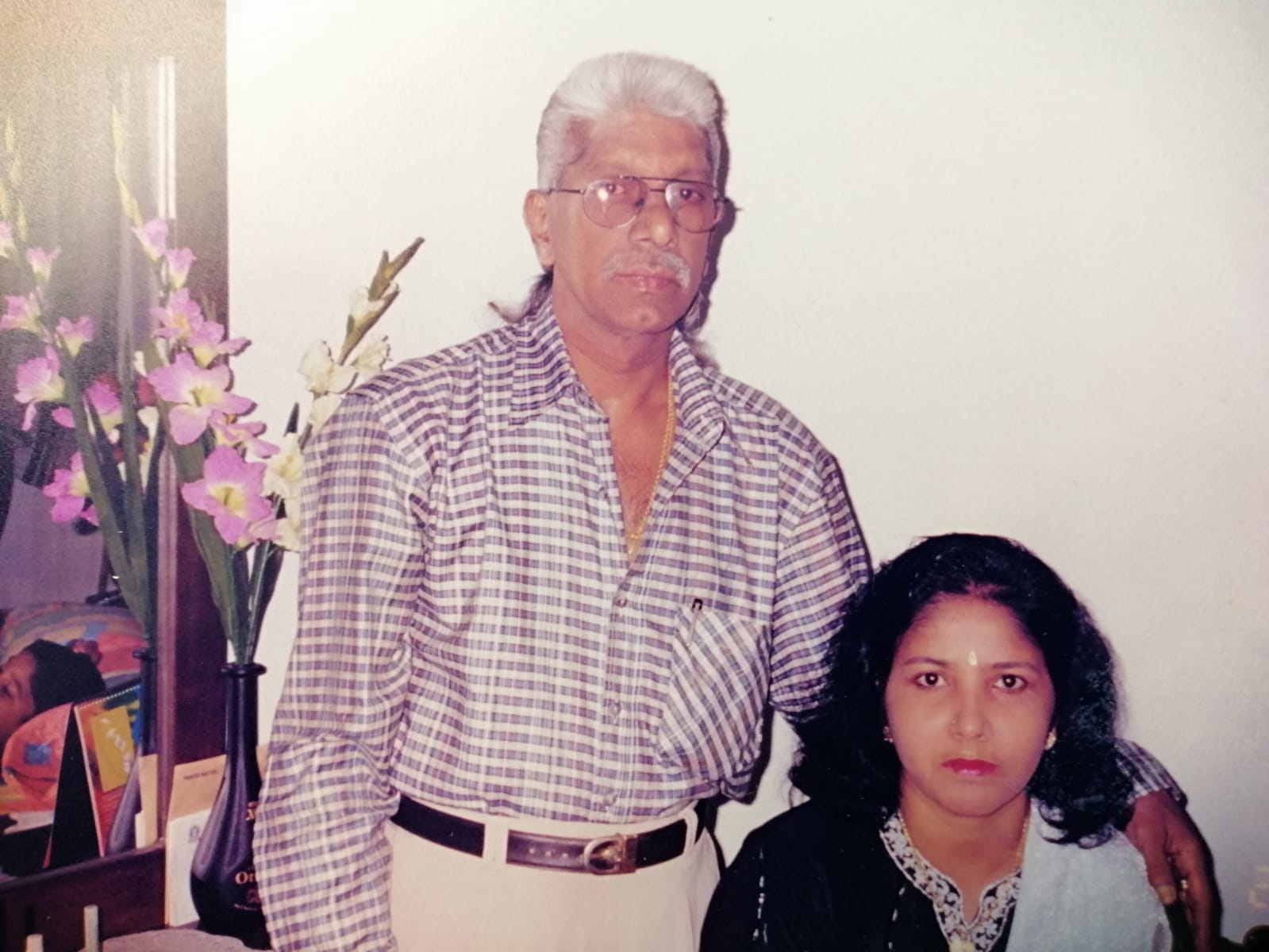 Personally, as a sports journalist over three decades, I feel Ramachandra can rightly feel hard done by, being overlooked at international level was a recurring theme. I can attest he always had special striker talent, nippy with tidy finishing ability, but the extraordinary competition level in the 1970s was just beserk.

The sight of a hefty striker dancing through a defence with grace and tidy footwork is an underrated genre of goal, like a bear performing ballet, and Ramachandra always showed he had that elite touch of class needed to unlock bunched defences.

I know some crunching injuries, knees and ankles, took a toll on his football career, as he got towards 30 years. But I always felt he was sometimes the missing piece of creative jigsaw for the Lions in the final one-third of play, especially in the penalty-area.

Rest in Peace, my good friend.