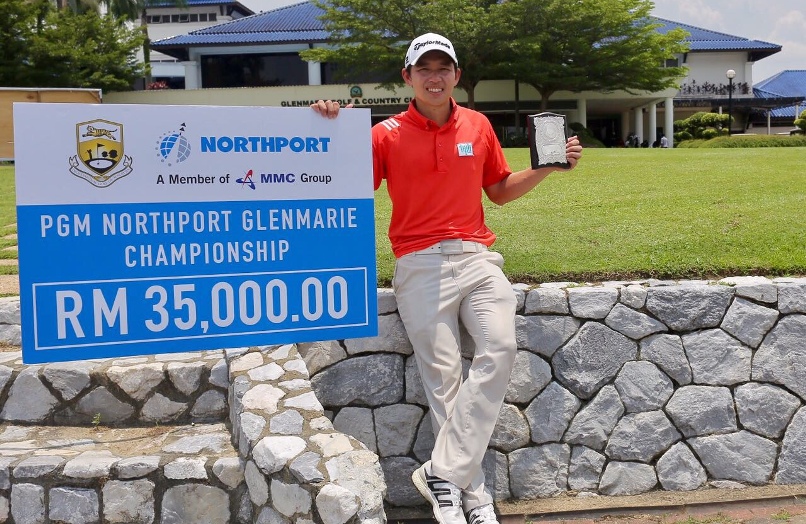 Leong, who started the round with an eight-shot advantage following a superb second round 62, lost his right contact lens before the round and had to use one of a different degree from his friend for his first nine holes at the Glenmarie Golf and Country Club.

The 31-year-old Sabahan obtained a replacement for his correct lens after making the turn and went on to complete a commanding wire-to-wire victory with a 20-under-par 196 total at the RM200,000 (approximately US$44,600) ADT event.

“It has been an eventful day! I couldn’t find my right contact lens this morning and I was prepared to head out with my glasses. I can’t remember when was the last time I played with my glasses!

“I was lucky enough to get one from my friend although it was of a different degree. I managed to play through the first nine with that before getting a replacement for my correct lens,” said Leong, who fired three birdies against a one and only bogey of the week on fourth.

Leong, a one-time winner on the Asian Tour in 2008, regained his Asian Tour card at the 2017 Qualifying School in January after finishing fourth. He, who had been impressive with five straight wins on the local Tour last season, was thrilled to finally win his first ADT title.

“I didn’t hit the ball as good today but I stayed patient out there and played one shot at a time. This win means a lot to me. Winning on the ADT was one of my goals for this year and I am glad to achieve it in my first ADT event this season.

“It’s great to see my hard work paying off. My short game has been superb this week but my long game could have been better. Hopefully this win will help me prepare well for the upcoming tournaments on the Asian Tour,” Leong added.

Leong took home a winner’s prize purse of US$7,868 and received six Official World Golf Ranking (OWGR) points following his victory at the PGM Northport Championship, which was reduced to 54 holes due to inclement weather earlier in the week.

Steve Lewton of England ended his campaign with a 69 to take second place while Japan’s Masaru Takahashi (65), China’s Liu Yan-wei (67), Donlaphatchai Niyomchon (67) of Thailand and James Byrne (70) of Scotland shared third on 204 in what is the third leg of the ADT schedule this season.

The ADT, which is celebrating its seventh season this year, will reward the top-five finishers on the Order of Merit at the end of this season with Asian Tour cards for 2018.

Leading third and final round scores: