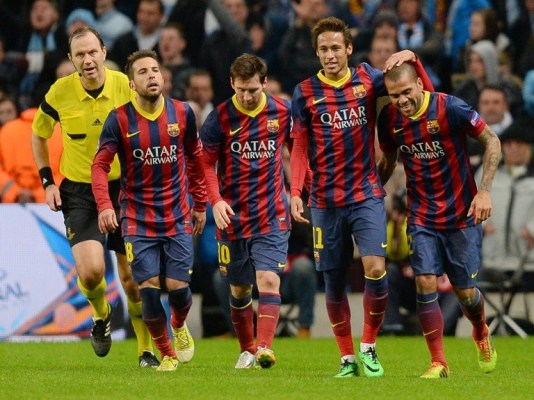 The main international sport appeal court on Tuesday backed a one year transfer ban against Barcelona in a major blow to the Spanish football giants.

The Court of Arbitration for Sport (CAS) “dismissed” a Barcelona appeal against the ban imposed by FIFA in April for breaching rules on signing players aged under 18.

Barcelona cannot buy players during the transfer window that opens on January 1 and for the summer transfer period before the 2015-16 season.

They can only open the cheque book again in January 2016.

The team said it would consider a new appeal to a Swiss federal court. The CAS and FIFA are based in Switzerland.

“The panel found in particular that FC Barcelona had breached the rules regarding the protection of minors and the registration of minors attending football academies,” said the statement.

Barcelona said it “totally disagrees” with the sanction which it called “disproportionate” and “excessive”.

The club acknowledged making “errors” but said these were caused by “conflict between FIFA regulations and Spanish legislation.” Barcelona said it would study the full CAS ruling and could make an appeal to a Swiss federal court.

FIFA announced the ban in April this year after an investigation into several players aged under 18 who were registered and played for Barcelona between 2009 and 2013. It found that Barcelona and the Spanish federation were guilty of a “serious” infringement of rules for 10 players.

Barcelona made a first appeal to the FIFA disciplinary committee and the sanction was suspended enabling them to make major signings such as Luis Suarez from Liverpool for 95 million euros ($115 million).

They also bought defenders Thomas Vermaelen from Arsenal and Jeremy Mathieu from Valenica, midfielder Ivan Rakitic from Sevilla and goalkeepers Claudio Bravo from Real Sociedad and Marc-André ter Stegen from Borussia Monchengladbach in a summer spree of more than 150 million euros.

FIFA’s appeal committee upheld the ban in August and Barcelona then went to the CAS.

Barcelona aggressively fought the ban at the start, calling it a “grave injustice” and a threat to its ‘Masia’ academy which nurtured the likes of Lionel Messi and Andres Iniesta. But it has since admitted errors in the cases of the 10 young players.

The ban is a new blow to the club’s image. It already faces criminal proceedings in Spain over alleged tax avoidance in the signing of Brazilian star Neymar in 2013. Argentine striker Lionel Messi also faces a possible trial over tax avoidance.

And the sanction will not help coach Luis Enrique in his campaign to get Barcelona back to the winning ways expected by fans. Barcelona had been linked with a January move for Germany’s World Cup forward Marco Reus.

The team won the Spanish title in 2013 but have since been eclipsed by Real Madrid and Atletico Madrid in Spain and Europe. Barcelona last won the Champions League in 2011.

They are currently one point behind Real but have played one game more. Reigning champions Atletico in third place are just three points behind.

Vermaelen is injured and not expected to play again until at least March and other new signings have not shone. Suarez has scored only one league goal since making his debut in October.

Enrique insisted this month however that Barcelona can compete even without new players.

The FIFA ban will put pressure on Barcelona president Josep Maria Bartomeu, already struggling with the Neymar case, and who may have to put his job up for reelection before his term ends in 2016. – Agence France-Presse