Home 2020 Can driving distance alone take you to the TOUR Championship? 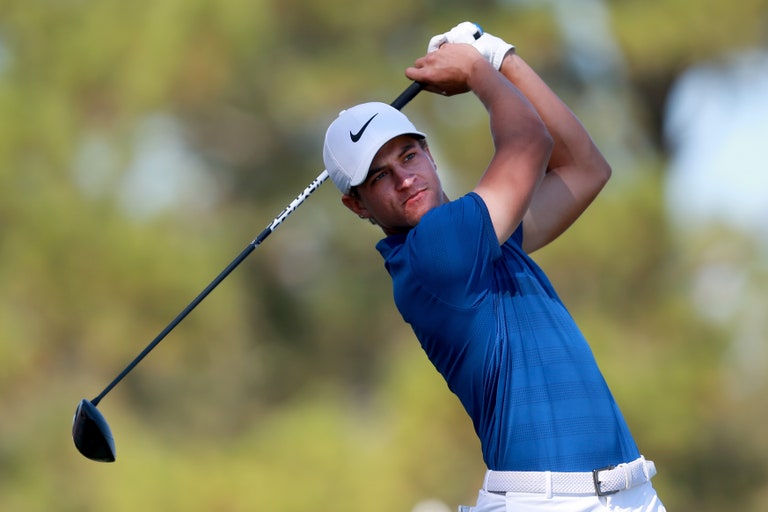 Cameron Champ can pound the ball. Known as one of the longest hitters on the PGA Tour, Champ validated that reputation by winning the Driving Distance category during the 2018-19 PGA TOUR season. Champ’s measured drives last season averaged 317.9 yards (289.86 meters).

The previous two seasons, Rory McIlory was statistically the TOUR’s longest driver of the golf ball. And in 2016, J.B. Holmes led the category.

While the trio’s prodigious tee shots wowed fans as they bombed one tee shot after another, their distance domination didn’t necessarily translate into FedExCup success. Champ finished 62nd in the final FedExCup standings, McIlroy was 58th in 2017 and 13th in 2018, and Holmes ended 30th in the final standings in 2016.

In the 13-year history of the FedExCup, the Driving Distance champion has never gone on to win the FedExCup. Two years after turning pro, Champ burst on the scene in 2019, winning the Sanderson Farms Championship and followed that with a win at the Safeway Open last fall, a tournament part of the now-delayed 2019-20 PGA TOUR season.

xChamp has always been known as a long driver of the golf ball. His ascension to the TOUR and his victories prove he’s more than just a tee box sideshow. As he’s made his way through the professional ranks, though, Champ has learned that accuracy along with blowing his ball past his competitors counts for something, too.

“I think for me dramatically, accuracy-wise with the driver, has increased, which is good,” he said in 2018, prior to winning his first victory, in Mississippi. “I [also] kind of create some shots that are my get-in-the-fairway drives. Once you get the rounds going and get comfortable, I kind of just let it go a little bit.” In other words, Champ has realized that sometimes it’s good to sacrifice a little distance if it means he can keep his ball in the fairway.

Bringing the Driving Accuracy category into the equation helps shed light on the need for both accuracy and length as it relates to overall success. But, again, success in one area without the same thing in the other seems to be problematic. Since 2007, only one Driving Accuracy leader has finished in the top 10 in the final FedExCup standings: Chez Reavie in 2019, when he closed the year in eighth place in the FedExCup.

McIlroy’s 2017 season is the perfect example. He led in Driving Distance for the first time, yet he was also wild off the tee, placing 161st in Driving Accuracy, giving him a Total Driving number of 162 (his combined positions in both categories). That tied the native of Northern Ireland for 56th in the category. He was tied with Zach Johnson that year, Johnson suffering an opposite problem to McIlroy: 22nd in accuracy but short off the tee, finishing No. 140.

McIlroy is acutely aware of his stats at any point during a particular year. In areas where he perceives he is struggling—and, let’s face it, as the No. 1 player in the world, there aren’t many weakness—he makes that aspect an important part of his practice routine. At times it has included his driving of the golf ball.

“I think a lot of the guys are starting to use ShotLink data to help with course management. But it’s also how you practice. So, I got a stats report last week after the three weeks that [I] had at Torrey Pines, at Riviera, and Mexico, and that’s what I base my practice off going into the next few weeks,” McIlroy said earlier this season following the Farmers Insurance Open, the Genesis Invitational and the World Golf Championships-Mexico Championship.

“It’s stuff that you sort of know anyway, but it’s nice when you have that objective data in front of you. So, I use it for a lot of different things. It is very important.”

Although not a perfect model—considering that iron shots, chipping, bunker play and, of course, putting also come into play—Total Driving, where the ranking for players in both Driving Distance and Driving Accuracy are totaled together, shows how important play from the tee can be.

In 2018, England’s Justin Rose won the FedExCup the same year he was the Total Driving champion. That season, Rose was 34th in Driving Distance and 33rd in Driving Accuracy, not great in either category but solid in both. In 2015, Sweden’s Henrik Stenson finished second in the FedExCup, to Billy Horschel, while winning the Total Driving category (12th in Accuracy and 43rd in Distance).

“The most important part of my driver swing is generating power from the connection between my feet and the ground,” Rose told Golf Digest clear back in 2014.

“The key moment of my downswing is when I’m halfway down. There, I’m focused on storing power and maintaining my height. I keep up the pressure into the ground through my feet. With all that leverage, I can push off and release the club powerfully into the ball. If I’ve stayed ‘in the shot’ and kept my connection to the ground, I’m ripping it down the middle.”

Once PGA Tour action resumes this season following the pandemic-caused layoff, fans’ eyes will naturally drift toward the players who can crush the ball off the tee. It was true when Sam Snead was the Tour’s longest driver of the ball, followed by players like Jack Nicklaus, John Daly and today’s bashers such as Champ, Dustin Johnson and Tony Finau. But observers of the game would be wise to also watch where those drives land. It’s all about distance and accuracy, which might explain why McIlroy is the No. 1-ranked player in the world and currently third in the FedExCup.

When McIlroy has his driver working, he’s tough to beat.