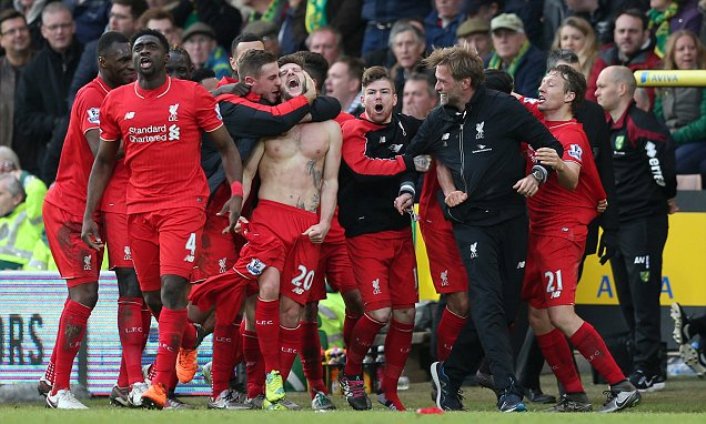 Borussia Dortmund coach Thomas Tuchel says his team’s confidence is sky-high for Thursday’s Europa League quarter-final, first-leg, at home to Liverpool in what has been dubbed the ‘Jurgen Klopp derby’.

The Liverpool manager enjoyed seven stellar years at Signal Iduna Park and can expect a warm welcomed in Dortmund, ahead of the return leg at Anfield on April 17.

Klopp steered Dortmund to the Bundesliga title in 2011, the league and cup double in 2012 and the 2013 Champions League final, but walked away at the end of last season when they finished seventh in Germany’s top flight.

Tuchel, his successor, has given Dortmund fresh impetus and they are second only to Bayern Munich in Germany this season.

Winger Henrikh Mkhitaryan is enjoying a stellar season alongside Germany star Marco Reus and Pierre-Emerick Aubameyang, who has scored 23 league goals, to form a trio which has netted 43 times in the Bundesliga.

But it was super subs Shinji Kagawa and Adrian Ramos who netted late goals in Dortmund’s 3-2 fight-back win over Werder Bremen on Saturday as they warmed up for Liverpool.

The win, which secured Dortmund’s place in the Champions League next season, was down to their ‘diligence and attitude’, according to Tuchel, while Klopp dubbed Borussia’s gritty team ‘monsters of mentality’ during his reign.

“To come from behind and stay calm showed a great reaction from the team,” said Tuchel.

“It’s an extra quality to have someone like Ramos who can come on, but it is a testament to all the players how intensive our training sessions are.

“My players are setting the standard in terms of attitude and diligence.

“Due to the number and type of our victories this season (36 wins in 46 games in all competitions), the team has developed a great confidence.

“I didn’t get the feeling that the Liverpool game was a factor, but from now on we’ll be concerning ourselves with the ‘Reds’.”

Nevertheless, Aubameyang opened the scoring in the second-half before Kagawa put them level and Ramos headed the late winner after Bremen had gone 2-1 up on 74 minutes thanks to an own goal from Gonzalo Castro and a neat strike from Zlatko Junuzovic.

While Tuchel was not talking about Klopp’s return, Dortmund’s CEO Hans-Joachim Watzke certainly was and he says his friendship with the Liverpool manager will be put aside until the final whistle.

“We will be clear opponents on Thursday, there is no need for mucking around in a friendship,” Watzke told broadcaster ZDF.

“My concern is that he will bring the (home) fans to his side and create a atmosphere like you get in a friendly.” – Agence France-Presse