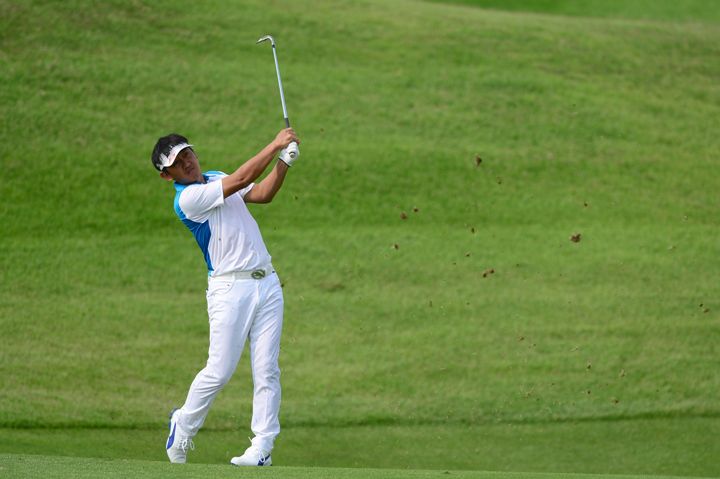 Singapore-based Australian Unho Park wielded a hot putter to grab a share of the clubhouse lead with an opening eight-under-par 64 at the weather-disrupted Players Championship on Wednesday.

Park fired nine birdies against a lone bogey for his career best 18-hole score which was matched by Thailand’s Tirawat Kaewsiribandit, who returned with a flawless round highlighted by eight birdies, at the Raffles Country Club’s par-72 Palm course.

The opening round of the Players Championship was disrupted after inclement weather caused play to be suspended at 2.15pm local time before resuming two hours later. Play was later called off for the day at 6.45pm due to fading light. A total of 60 players will resume their opening rounds at 7.30am on Thursday morning with the second round commencing at 8.25am.

Home favourite Mardan Mamat and newly-turned professional Jerome Ng emerged as the highest-placed Singaporeans in tied-seventh place following identical rounds of 68 in what is the first ADT event to feature in Singapore since the burgeoning Tour was inaugurated in 2010.

Despite closing the round with his only bogey of the day on ninth, Park was delighted to sign for a career-first 64 where he needed only 25 putts around the Palm course.

“I putted really well. I hit a lot of good shots and a couple of bad ones as well but I managed to recover well. That kept my momentum going out there. Usually when I hit bad shots, my round just goes down but I managed to get it together today,” said the 42-year-old Park.

His highlights of the day include a 30-footer birdie putt on 15 and a spectacular 40-footer putt for birdie on first.

“I have never really play well on this golf course before so I am happy with how I played today. I have never shot a 64 in a tournament before. It’s definitely a great boost for me heading into the next three rounds,” added the father of two.

Tirawat is determined to erase the heartbreak of missing out on his 2016 Asian Tour card at last week’s Qualifying School with a good showing at the Players Championship.

“I played with no pressure. I didn’t get any practice rounds prior to the tournament so I played with no expectations. I guess that was the key to playing well today. My iron-play was good and I putted really well,” said the 26-year-old Thai.

Mardan, playing on his home course this week, lamented a round which could have been better but took it in his stride as he capped a flawless front nine highlighted by four birdies.

He added two more birdies after the turn but slipped back after consecutive drop-shots on 15 and 16.

“It could have been a better round. I made some silly mistakes on my back nine where I three-putted 15 and hit it into the water on 16. But overall, I am pretty happy with where I stand. I played really well on my front nine. I hit the ball really good and I putted well,” said the experienced 48-year-old, who has won five times on the Asian Tour.

Ng, who coaches the National Team for Singapore, marked his card with five birdies against a lone bogey to trail by four shots.

“I played solid today, especially with my irons. I managed to hit a lot of greens as well. I just tried to keep it in play out there and I managed to give myself some birdie chances. My dad’s on my bag this week after a very long time. I felt really comfortable out there,” said the 26-year-old, who won his very first event as a professional on the local circuit last October.

The winner of the ADT’s season-opening Players Championship will earn a prized spot in the US$1 million SMBC Singapore Open which will take place at the Sentosa Golf Club from January 28 to 31 next week.