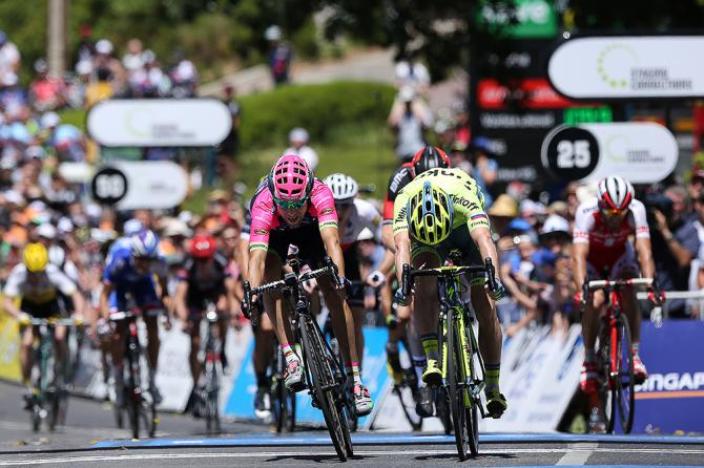 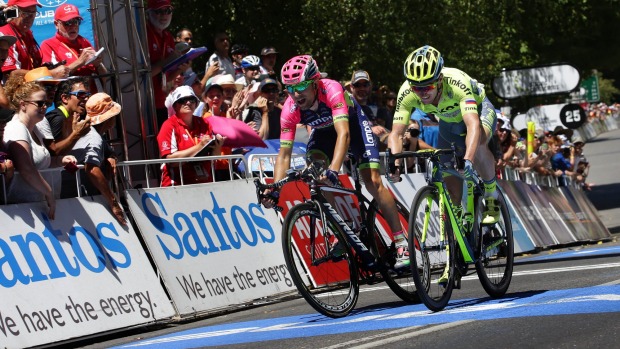 Australia’s Jay McCarthy claimed his biggest win as a professional when he took a thrilling second stage of the Tour Down Under in the South Australian town of Stirling on Wednesday.

McCarthy, from the Tinkoff team, beat Italian Diego Ulissi (Lampre Merida) by a matter of centimetres as both lunged for the line at the end of the 132-kilometre stage, finishing in 3hr 26min 40sec.

The 23-year-old Queenslander will wear the ochre leader’s jersey in Thursday’s third stage, taking it from sprinter Caleb Ewan, who fell off the back of the peloton towards the finish.

Race favourite Simon Gerrans (Orica GreenEdge) was caught up in a crash inside the final kilometre just moments after he put himself in a perfect position to take the stage win.

But there were no such worries for McCarthy, who avoided the trouble then surged inside the 300 metres.

Ulissi, who won the Stirling stage in 2014, came hard at McCarthy but the Australian dug deep and just managed to hold on.

“I’ve been eyeing off this stage for a few years now and before the start I was hoping I’d get my chance,” McCarthy said.

“The team sat down before the race and said they would support me today and I’m just glad I could do it for them.”

The race, which began in the inner-city Adelaide suburb of Unley, saw Lotto-Soudal’s Adam Hansen break away and get his lead out to two minutes on the first of five undulating 21-kilometre circuits around Stirling in the Adelaide Hills.

But he was reeled in with 19 kilometres to go and the peloton stayed together until close to the eight-kilometre uphill run to the finish.

Team Sky attacked first trying to put Welshman Geraint Thomas into prime position but they went too early and couldn’t maintain the pace.

Movistar and Cannondale also tried to bring their riders forward but the pace set by Sky had taken its toll and the peloton was strung out with two kilometres to go.

Gerrans said later that he and teammate Daryl Impey were uninjured despite being caught up in the fall.