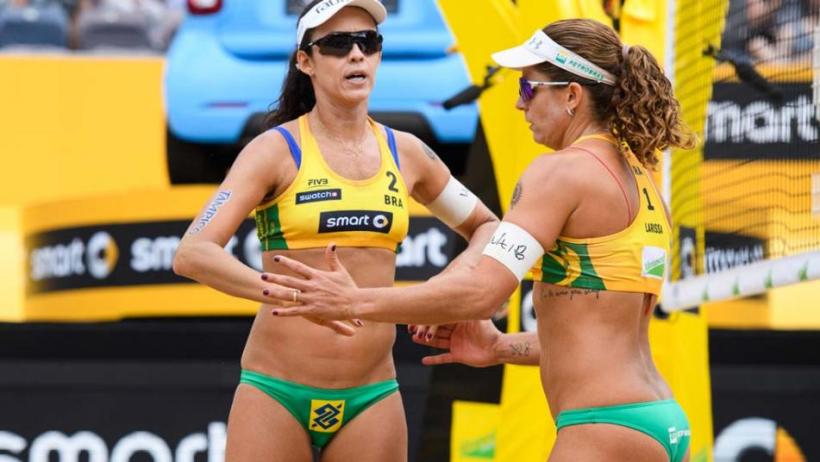 What to expect at the Olympic Beach Volleyball in Rio de Janeiro in five points:

+ Larissa and Talita (main pix) and Barbara and Agatha will be leading the party as beach volleyball celebrates its 20th anniversary as an Olympic sport on Copacabana beach in Rio. The Brazilian teams who are favourites for Rio often go by just their first names. Larissa Franca is the all-time leader in beach volleyball titles and since coming out of retirement in 2014 to team up with Talita Antunes, they have beaten American favourites Kerri Walsh Jennings and April Ross four times and lost just once. Agatha Bednarczuk and Barbara Seixas are reigning world champions. Brazil are also favourites for the other gold in the men’s contest through world champions Alison Cerutti and Bruno Schmidt. Brazil have often promised a lot and delivered little however. They have only one gold medal for the men in 2004 and none in the women’s contest since the first Olympic tournament in 1996.

+ Beach volleyball is one of fastest growing Olympicsports, the international tour — which includes many places such as Moscow which do not have a beach — now has $10 million in prize money. In this sport, there are more women millionaires, than men, according to volleyball agent Tim Kelly.

+ After Bondi beach in Sydney, Chaaoyang Park in Beijing and Horse Guards Parade in London, the beach volleyball will be at one of its most iconic venues in Rio. Copacabana is arguably the capital of beach volleyball and by most rankings one of the world’s top five venues. American champion April Ross said “the atmosphere is unforgettable.” A lot of professionals rank Karon beach in Phuket, Thailand as the best however.

+ The Olympics is only played in pairs on a court 16 metres long, eight metres wide with a a 2.43m high net for the men and 2.24m for women. There will be 24 teams in each of the men’s and women’s contest in Rio where the contest runs from August 6-18. No country can have more than two teams, which cramps the style of Brazil and the United States which dominate the world rankings. Sixteen pairs will qualify from the initial group stage for the knockout rounds.

+ There is always a price to pay for the glory in sport, and in the case of Kerri Walsh Jennings, gold medal winner in 2004, 2008 and 2012, it has been undergoing surgery four times to be ready for Olympic Games. The 37-year-old cut her recovery time from operations on her right shoulder from six months to four so she could get back to the tour to qualify for Rio. “Six Feet of Sunshine” as Walsh Jennings is known, has even made a documentary with footage in the operating theatre that will come out this month in the United States. She also had surgery before the last three Olympics “so that’s old hat”, she declared.