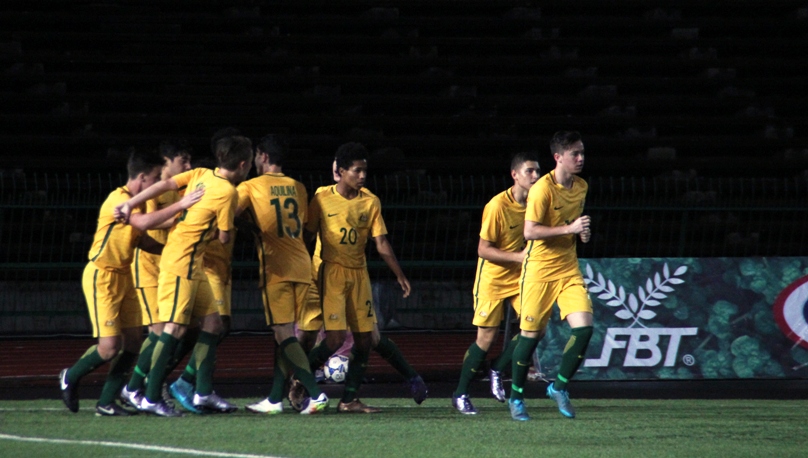 Four-goal hero John Roberts fires Australia into the semi-finals of the AFF Smart Under-16 Championship from Group A as they demolished Malaysia 7-1 here tonight at the National Olympic Stadium.

The Australians, who just needed a draw for a place in the next round, were just too organised for the Malaysians although the latter tried hard to match their physically stronger opponents.

Just four minutes into the game, a defensive mistake cost the Malaysians dearly when a failed clearance allowed Jacob Italiano to come in from the far post for a shot past Malaysian keeper Muhammad Firdaus Irman Mohd Fadhil.

And while Malaysia did manage to find the equaliser through Muhammad Nizaruddin Jazi in the 29th minute, that was to be their only bright spark as Australia turned on the power after the break.

Just three minutes into the second half, and Australia duly took the lead through Roberts as he then added a second off a header in the 59th minute.

It was easy pickings in the 63rd minute when Lachlan Brook shot in past a Malaysian defence in disarray as Roberts added two more goals in the 66th and 73rd minute.

Italiano then completed the humiliation for Malaysia with the seventh goal of the game seven minutes to the end.

In the meantime in the two other matches that had no bearing on the final outcome in Group A, leaders Vietnam blanked Singapore 3-0 as Myanmar also completed their fixtures by beating the Philippines by the same scoreline.

With the score at 2-0 to Vietnam’s advantage, they then added the third goal off Nguyen Tran Viet Cuong in the 59th minute.’

On the other hand, the Philippines made a game of their final group tie against Myanmar when they held out for long periods to frustrate their opponents to a scoreless draw at the end of a pulsating first half.

But some persistence pressure finally paid off for Myanmar when Win Naing Tun found the back of the net right at the hour mark.

Bo Bo Aung and Hein Htet Aung then added the second and third goal in the 67th and 81st minute respectively.