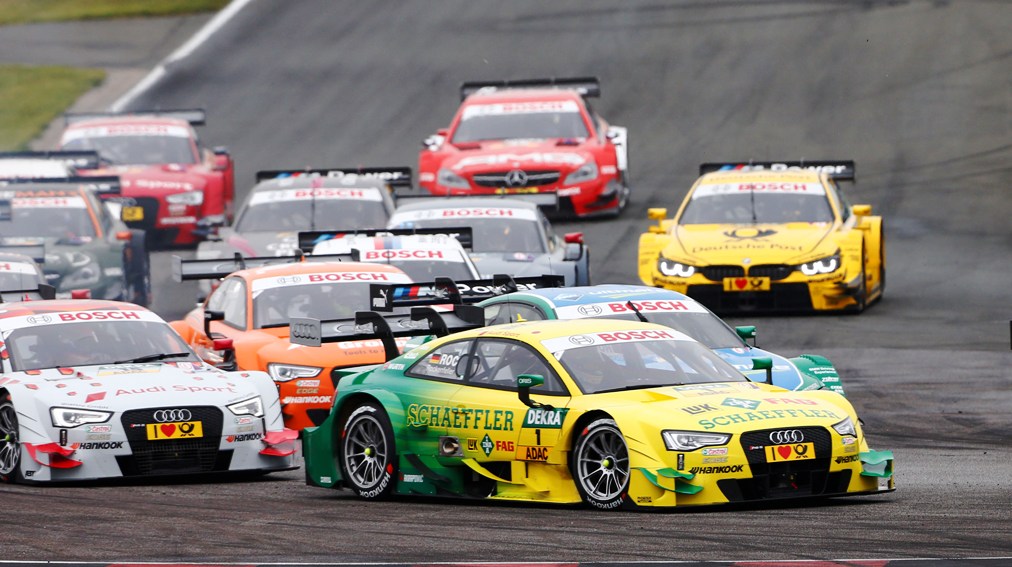 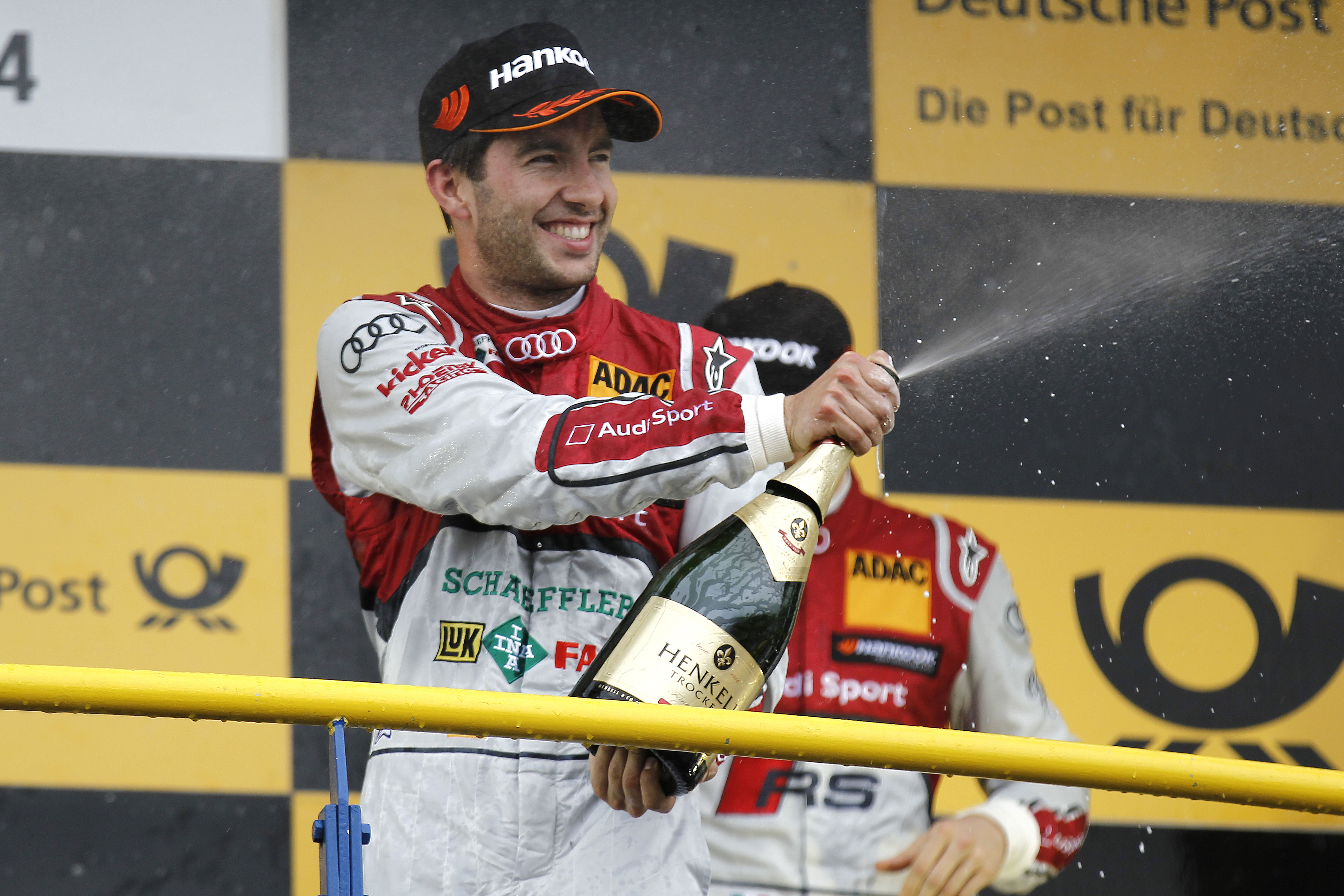 More than 65,000 spectators (throughout the weekend) at the Motorsport Arena Oschersleben saw an action-packed DTM race of the curious kind in which rain and safety car periods made for a tire gamble. The big winners of the day included title defender Mike Rockenfeller, who as the runner-up in the Schaeffler Audi RS 5 DTM of Audi Sport Team Phoenix took the lead of the drivers’ standings. Audi moved to the top in the manufacturers’ and teams’ standings as well.

Right in time for the start of the race the sky above the Motorsport Arena opened its floodgates. The drivers who started the race on harder standard tires lost position by position as the track became increasingly wet. They also included Mike Rockenfeller, who dropped as far back as 19th place. The decision of his team to call the reigning Champion in for an early mandatory pit stop proved to be a fortunate move. Favored by a total of three safety car periods Rockenfeller was able to recover the previously lost ground and in the end crossed the finish line in second place, trailing the winner Christian Vietoris by a gap of only 0.674 seconds.

“It was a chaotic race,” Rockenfeller said after the race. “I started on standard tires and that wasn’t a good choice for the initial conditions. For me, the race seemed to be over at that time. But then Team Phoenix made a superb decision and called me in for the tire change at exactly the right moment. Even victory would have still been possible. But second place is good, too. We scored a lot of points and clinched the lead of the standings. It was a great day for us. ‘Many thanks’ to Audi and to Team Phoenix.”

With Edoardo Mortara in the Audi Sport Audi RS 5 DTM of Audi Sport Team Abt Sportsline two Audi drivers were on podium just like in the season opener at Hockenheim two weeks ago. The Italian was touched by Pascal Wehrlein in the hectic early phase, spun and dropped to 21st place. Mortara moved up his mandatory pit stop as well and thus took third place following a fierce battle with Vietoris and Rockenfeller. 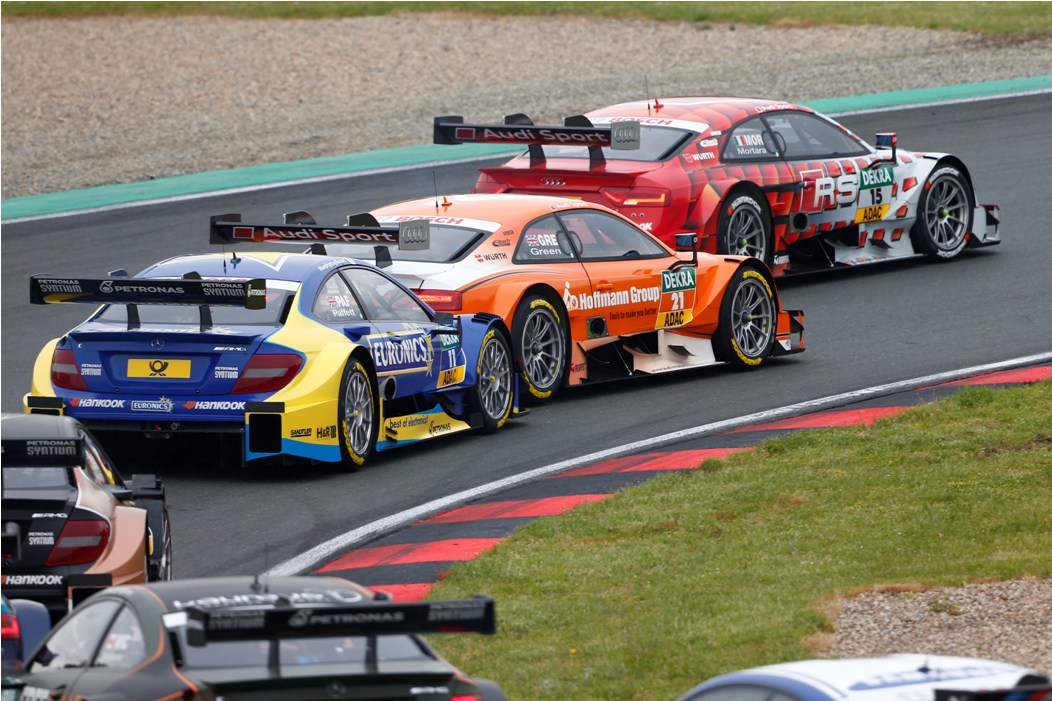 An impressive recovery was also achieved by Miguel Molina, who in his Audi Sport Audi RS 5 DTM had retroactively lost his commandingly clinched pole position on Saturday due to a violation of the Technical Regulations and had to start the race from the last position on the grid. With the fastest race lap and sixth place the Spaniard confirmed Saturday’s performance. The tragic hero of the race was Jamie Green, who in the Hoffmann Group Audi RS 5 DTM of Audi Sport Team Rosberg was in a class of his own in the race, advanced to the front from tenth place on the grid and gained an advantage of more than ten seconds that was subsequently ruined by the safety car periods. In the end, Green took a gamble, switched to slicks but on the last lap slipped and lost a possible seventh place. Green together with Adrien Tambay (Playboy Audi RS 5 DTM) and Timo Scheider (AUTO TEST Audi RS 5 DTM) had made for an Audi one-two-three lead for large parts of the race. The safety cars destroyed their race as well. Positions seven (Scheider) and ten (Tambay) were only little consolation. Mattias Ekström (Red Bull Audi RS 5 DTM) and Nico Müller (Audi Financial Services Audi RS 5 DTM) in positions 13 and 16 finished out of the points. “It was a crazy race with an unexpected outcome,” said Dieter Gass, Head of DTM at Audi Sport. “When you’ve got the fastest car in the field, are leading the race for some time with three cars and have more than a ten-second advantage it’s obviously a bit disappointing to take second and third place in the end. But today was a gamble that favored those who were able to take the biggest risks. It’s great that we again had two drivers on the podium and have taken the lead in the drivers’, manufacturers’ and the teams’ standings. The race also had two tragic heroes: Jamie Green, who was in a class of his own in the rain today and in the end went unrewarded. Plus: Miguel Molina, who drove the fastest lap. If he hadn’t been forced to start from the last position a lot more than sixth place would probably have been possible. He’s extremely fast this year.”