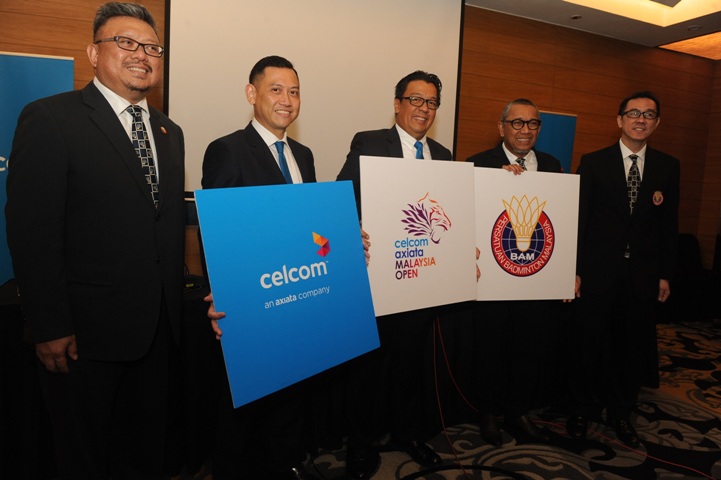 Celcom Axiata Berhad – Malaysia’s leading data network provider has signed on as the main sponsor for Badminton Association Malaysia (BAM), to revive the glory days of badminton and a promise for greater digital heights in Malaysia with consistent programmes and engagement activities.

Dato’ Sri Shazalli Ramly, Chief Executive Officer of Celcom Axiata Berhad said Celcom Axiata was tremendously honoured to share a common interest with the nation through the sport of badminton as Malaysians love the energy, dynamism and can easily connect and relate to the game.

“We are deeply humbled to be part of this epic sporting activity that has been a favourite with Malaysians for a long time now. Celcom Axiata greets with pride the role to be the main sponsor for the future badminton history,’’ he said, adding that Celcom Axiata’s foray into sports was an ideal aspiration and another milestone for the company to do more for the country.

Earlier a memorandum of understanding (MoU) was signed to seal the deal, where Prime Minister, YAB Dato’ Sri Mohammad Najib Tun Abdul Razak and wife of the Prime Minister, YABhg Datin Paduka Seri Rosmah Mansor, who is also the patron of BAM, together with Minister of Youth and Sports, YB Khairy Jamaluddin Abu Bakar witnessed the signing of the collaboration by Dato’ Sri Shazalli Ramly, Chief Executive Officer of Celcom Axiata Berhad and Tan Sri Mohamed Al-Amin Abdul Majid, Acting President of the BAM Council at the Prime Minister’s Office.

Following the signing on as the main sponsor, Celcom Axiata’s collaboration will enable BAM to carry out an assorted range of engagement programmes and initiatives for the future of badminton in the country – with partners and fans nationwide via Celcom Axiata’s digital sphere and revitalise the game’s glory days once again.

Shazalli Ramly said being Malaysia’s leading data network provider, Celcom Axiata was determined to enhance the game of badminton with greater experiences and heightened services for the game itself and its fans.

“Badminton has been one of the nation’s core sporting events that brings prominence and international recognition as well as it is being committed in the Government’s plan to achieve sporting excellence, Celcom Axiata’s sponsorship is not only fitting but also aligned with the Government’s initiative.

“It is an internationally renowned sport and its positioning is fitting for Celcom Axiata’s brand promise and coverage (almost 12.5 million customers nationwide, to be recognised globally). By leveraging on the widest and strongest 4G LTE network in the country, and embracing digitalisation, we are confident of bringing badminton to greater heights whilst projecting a strong brand visibility through our association with BAM and Malaysia’s champion status in this game,’’ he said.

Shazalli Ramly added that Celcom Axiata will use its experience from previous events, like supporting the Axiata Cup 2013, to boost the coverage and enthusiastic spirits of badminton in Malaysia.

“I believe that Celcom Axiata’s image of dynamism and vibrancy that is highly recognised by Malaysian youth, will spur Malaysian badminton to greater heights,” he said.

Celcom Axiata will offer attractive products and services that will further enhance its brand activation before and during the tournaments.