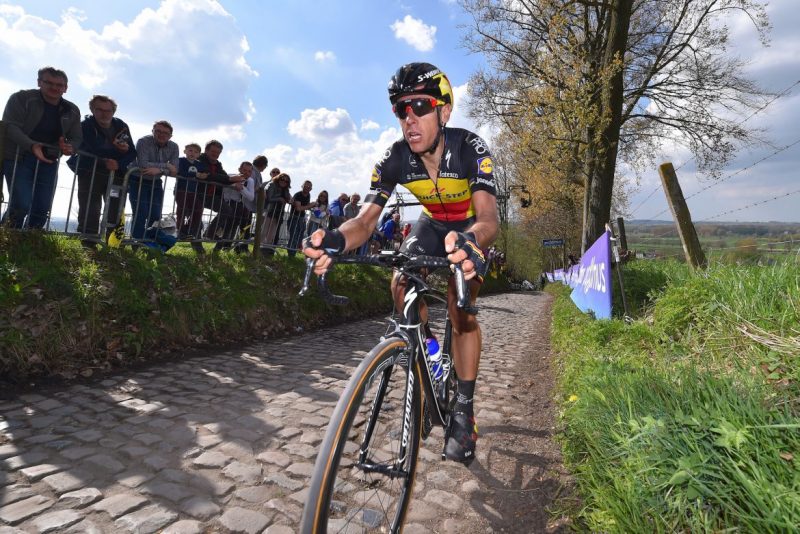 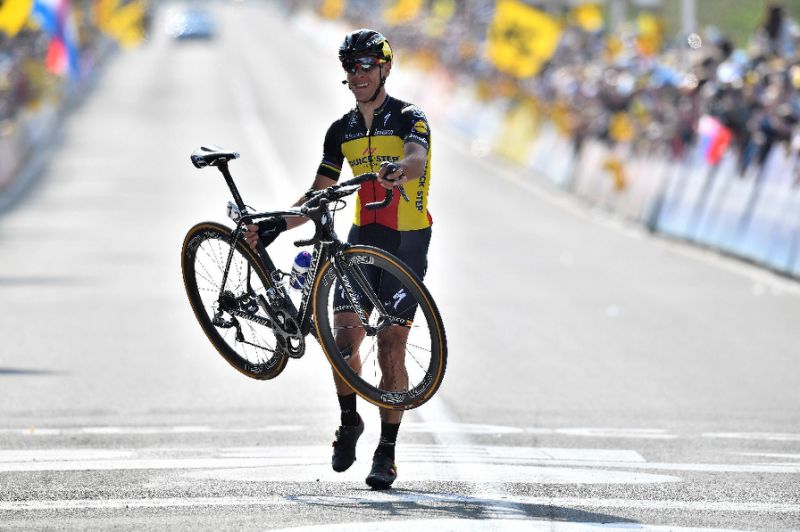 Belgian champion Philippe Gilbert carried his bike over the line above his head as he won the prestigious Tour of Flanders for the first time on Sunday with a remarkable solo breakaway.

Gilbert, 34, attacked alone with 55km of the 261km race to go and held on to win as world champion Peter Sagan and Olympic gold medallist Greg Van Avermaet crashed 17km from the end of the cobbled classic.

Van Avermaet, the in-form rider this spring, picked himself up to take second place ahead of Gilbert’s Quick Step Floors team-mate Niki Terpstra but the crash with Sagan and Oliver Naesen potentially robbed the race of a grandstand finish.

Victory in Flanders added to the 2012 world champion’s impressive resume that includes stage wins at all three Grand Tours and victories in two other ‘Monument’ races — Liege-Bastogne-Liege and the Giro di Lombardia.

It was his seventh participation at Flanders and first for five years having previously come third in 2009 and 2010.

But while a BMC team-mate of Belgian compatriot Van Avermaet’s he was forced to ride the Ardennes classics rather than the cobbled ones.

He was part of a group of 14 riders who broke clear of the peloton around 90km from the finish as another team-mate, three-time Flanders winner Tom Boonen, accelerated up the iconic Muur climb.

Both Van Avermaet and Sagan were caught out and left in the peloton, which quickly lost a minute.

They had started to close in when, with 55km to go and on the second ascent of the 2.2km-long Oude-Kwaremont climb, Gilbert turned on the after-burners and broke clear on his own.

A crash took out Belgian Sep Vanmarcke, third in 2014 and last year, also taking down Briton Luke Rowe and forcing Maciej Bodnar off the road.

But Gilbert remained out front on his own with a little over 30 seconds.

The Belgian champion stretched out his lead to over a minute but he had a long way to go solo to try to hold off a group containing many of the favourites and strongest riders in the race.

On the Taaienberg climb at 37km from the finish, Boonen suffered a mechanical problem that ended his chances while Sagan and Van Avermaet went on the offensive.

They formed a seven-man chase group just under a minute behind as Gilbert hit the third and final ascension of the Oude-Kwaremont climb with 18km left.

Sagan attacked on that climb with only Van Avermaet and Naesen able to follow but suddenly, the world champion clipped the barriers separating riders from fans and went down, taking his two companions with him.

Those three looked the only ones capable of catching Gilbert and their crash left the Belgian free to ride to victory.

Van Avermaet did manage to climb back on his bike and form a chase trio with Dylan Van Baarle and Terpstra, who was merely sitting in behind the other two chasers.

Gilbert was tiring but with only two men working behind to try to catch him, the gap was too much to close.

Van Avermaet took the sprint finish for second leaving him to wonder what might have been without his crash.

Results from the 261km 101st edition of the Tour of Flanders from Antwerp to Oudenaarde on Sunday: