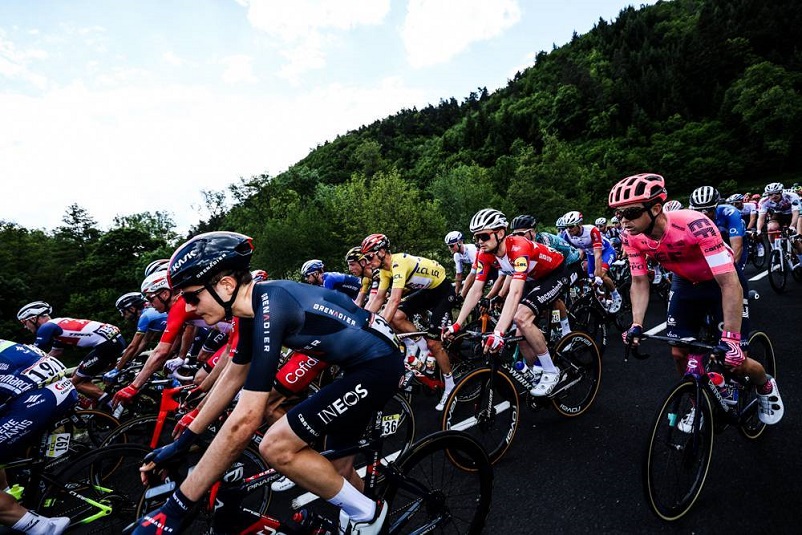 “I planned it a few weeks ago. I knew the first two stages would be good for the breakaway riders, with not many sprinters in the race. I knew I could do it. I already tried yesterday. Today I had a shot. It was really hard, I tried to manage my pace in the climbs. I was at the limit, I couldn’t speak anymore on the radio. It was just pain. It means a lot to me. When I won in the Giro, I was a nobody, but winning here and planning this in advance is amazing. I didn’t imagine I would take the yellow and blue jersey.”

On his day, Lukas Pöstlberger (Bora-Hansgrohe) is one of the fiercest attacker to resist a raging bunch and he proved it again on stage 2 of the Critérium du Dauphiné, claiming victory in Saugues after an impressive solo attack in the final 18km. The Austrian baroudeur spent the whole day at the front and maintained a gap of 11’’ on the line with Sonny Colbrelli (Bahrain Victorious) finishing second again, this time ahead of Alejandro Valverde (Movistar).

Stage 1’s winner Brent Van Moer (Lotto Soudal) couldn’t keep up with the blazing pace up the final climbs and lost his yellow and blue jersey to Pöstlberger, who leads a stage race for the first time since he fended off the bunch on stage 1 of the 2017 Giro d’Italia.

Among the 146 riders starting from Brioude, many attackers want to be part of the breakaway of the day. After 10km of battle, Lukas Pöstlberger (Bora-Hansgrohe) initiates a move backed by Anthony Delaplace (Arkea-Samsic), Matthew Holmes (Lotto-Soudal), Shane Archbold (Deceuninck-Quick Step) and Rob Power (Qhubeka-Assos). Trek-Segafredo and Bahrain-Victorious lead a hard chase but they eventually let the break go after 20km and the gap jumps from 10’’ to 5’25’’ at km 38. Ineos Grenadiers send Andrey Amador and Dylan van Baarle at the front of the bunch to control the gap.

Holmes leads the way up

The peloton move closer on the first climb of the day, the cat-1 Col de Peyra Taillade (km 52.3). Holmes goes first over the top, already matching Brent Van Moer’s tally in the lead of the KOM standings. The Ineos-led bunch summit with a delay of 3’45’’. Holmes takes 2 more KOM points on the Côte de la Vachellerie (km 78.1) and the leaders cross the finish line for the first time (km 84,3) with a lead stabilised around 3’50’’.

The rolling terrain takes its toll on the attackers and Power is distanced by his companions with 62km to go. He abandons later in the stage. The gap is still up to 3’20’’ and Bahrain Victorious start working at the front of the bunch to bring the gap down to 3 minutes at the bottom of the third categorised climb of the day, Côte d’Auvers (4km at 4.1%), and 2 minutes at the summit, where Holmes takes one more KOM point on his way to wearing the polka-dot jersey on the podium at the end of the day.

Pöstlberger and Archbold, who spent three seasons together with Bora, drop their companions in a downhill section with 35km to go. The Austrian goes solo with 18km to go while the peloton seriously up the ante. The gap is down to 2’20’’ and the chasers push even harder on the Côte de la forêt de Pourcheresse. Marco Brenner and Felix Gall try to go one after the other for Team DSM but Ineos Grenadiers set a stifling pace.

The yellow and blue jersey Brent Van Moer (Lotto Soudal) is dropped with Chris Froome (Israel Start-Up Nation) just before the final 10 kilometres, and so is Alexander Kristoff (UAE Team Emirates). Ben O’Connor (AG2R Citroën) and Guillaume Martin (Cofidis) try to open gaps atop the Côte de Masset but a 40-man peloton get back together, only to see Pöstlberger take the win 11’’ ahead of Sonny Colbrelli (Bahrain Victorious), 2nd for the second stage in a row. – www.criterium-du-dauphine.fr