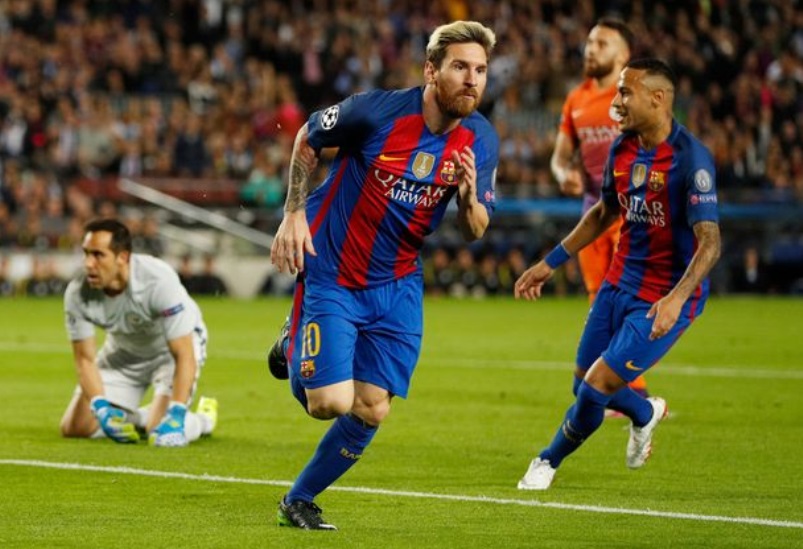 Lionel Messi spoiled Pep Guardiola’s homecoming by scoring a hat-trick in Barcelona’s 4-0 win over 10-man Manchester City in the Champions League on Wednesday, while Bayern Munich shook off their recent patchy form to defeat PSV Eindhoven 4-1.

Messi pounced on a Fernandinho slip to nudge Barca in front on 17 minutes, and the Argentine doubled his tally on the hour following the dismissal of City goalkeeper Claudio Bravo.

The Chile international, who left the Camp Nou in August to replace Joe Hart at City, was sent off for a blatant handball outside the area having knocked his misplaced clearance straight to Luis Suarez.

Messi swept in a third on 69 minutes to complete a second straight hat-trick in Europe, while Barca also finished the game a man down after substitute Jeremy Mathieu picked up a second booking.

Neymar missed a late penalty but atoned with Barca’s fourth soon after as the Spaniards made it three wins from three to take control of Group C, with second-place City five points adrift.

“At that level it is hard, but until 10 against 11 it was open and we were competing against a team with a big personality,” Guardiola told BT Sport.

“But after the (red) card it was over. I spoke with (Bravo), he was disappointed but it’s part of the game.”

Lars Stindl and Andre Hahn both capitalised on mistakes from Kolo Toure to gift Borussia Moenchengladbach their first points of the competition with a 2-0 win at Celtic.

In Munich, Carlo Ancelotti’s Bayern dismissed concerns about their performance of late by ending a three-match winless run at home to PSV Eindhoven.

Thomas Mueller grabbed a 13th-minute opener at the Allianz Arena before fellow Germany international Joshua Kimmich netted his seventh goal in all competitions this season.

Luciano Narsingh gave PSV hope when he halved the deficit shortly before the break, but Poland striker Robert Lewandowski eased fears of another setback with Arjen Robben netting Bayern’s fourth.

However, the Bundesliga giants still trail Atletico Madrid in Group D after Yannick Carrasco’s second-half strike steered last year’s finalists to another 1-0 victory away to Russian side Rostov.

Mesut Ozil notched a second-half hat-trick as Arsenal thrashed Ludogorets Razgrad of Bulgaria 6-0, the German piling on the misery for the visitors after goals from Alexis Sanchez, Theo Walcott and Alex Oxlade-Chamberlain.

“It will be difficult not to be satisfied, we scored a lot of goals and kept a clean sheet. We were fast and dangerous. We are confident and we must stay focused in every single game,” said Gunners boss Arsene Wenger.

Paris Saint-Germain also have seven points in Group A, but the French champions rode their luck in a 3-0 win over Basel.

The Swiss outfit twice hit the woodwork at the Parc des Princes before Angel di Maria fired the hosts ahead just before half-time.

Brazilian Lucas doubled PSG’s lead on 62 minutes, with Basel defender Marek Suchy then heading against the post, before Edinson Cavani netted his 17th goal for club and country this term courtesy of a stoppage-time penalty.

Napoli’s hopes of becoming the first side through to the last 16 were dashed as Vincent Aboubakar struck twice in Italy to earn Besiktas an impressive 3-2 victory.

Adriano put the Turkish champions ahead on 12 minutes in Naples, but Belgian winger Dries Mertens replied on the half hour.

Aboubakar restored Besiktas’ lead before the interval only for Manolo Gabbiadini to cancel it out from the penalty spot, with Lorenzo Insigne having seen an earlier spot-kick kept out by Fabri.

But Cameroon international Aboubakar struck again four minutes from the end to move Besiktas to within a point of leaders Napoli in Group B.

Benfica also registered their first win thanks to an Eduardo Salvio penalty and a Franco Cervi goal in their 2-0 triumph away to Dynamo Kiev. – Agence France-Presse