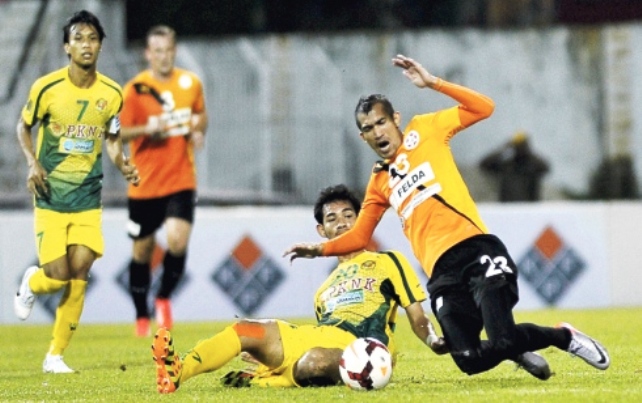 # End of the journey for veteran Indra Putra with Felda United

# Coach Irfan Bakti on the ‘hunt’ for younger players

Super League outfit Felda United may not have made the final of the Malaysia Cup but they ended the competition on a high note that became the talk of the football fraternity in the country when they ousted hot favourites Johor Darul Takzim in the quarter-finals.

The plantation giants added another feather in their cap with a 2-1 win in the return-leg quarter-final at the Larkin Stadium to advance to the last four 3-2 on aggregate after the first-leg at the Selayang Stadium in a 1-1 draw.

In the process Felda United became the first team since October 2013 to beat the Southern Tigers at Larkin. It was a painful defeat for the newly crowned AFC Cup champions who created Malaysian football history as the first team from Malaysia to win the Asian title.

Felda United were themselves knocked out by Premier League champions in the Malaysia Cup semi-final – advancing to the final 4-2 on aggregate with a 3-1 win at Selayang after a 1-1 stalemate in Alor Setar.

Another evergreen veteran in the Felda United squad – skipper Shukor Adan – will know his fate on Wednesday (Dec 16) after the Malacca-born Shukor meets the team management.

Chief coach Irfan Bakti is not able to throw light on Shukor’s fate but is ready to face the challenge if Shukor is also on his way out with The Fighters as Felda United are known.

“There will be some more changes in the team. The priority is to bring in some young blood into the team to face the challenge next season,” said Irfan who has a contract with Felda United that runs through 2016.

Earlier Australian hitman Ndumba Makeche did not extend his contract which expired in November after the Malaysia Cup was extended following postponement of matches due to haze and JDT’s participation in the AFC Cup final.

Felda United could only finish fifth in the 12-team Super League competition plus a place in the Malaysia Cup semi-finals and a first round exit in the FA Cup.

“It was a good outing overall in the M-League this season. Things would have been much better but we have considered all factors with our achievements this season,” added Irfan.

Felda United will resume training in January for the new season.