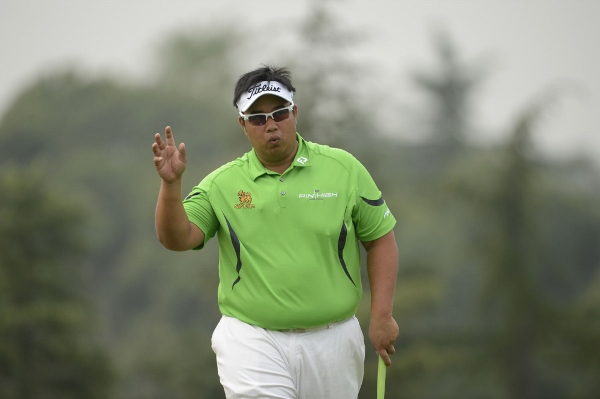 In-form Thai stars Thongchai Jaidee and Kiradech Aphibarnrat, both former Asian Tour number ones, will be aiming to add the Venetian Macao Open onto their growing list of victories after signing up for the prestigious US$1 million tournament from October 15 to 18.

Veteran Thongchai, the only man to win three Order of Merit titles in Asia, will arrive at the Macau Golf and Country Club in top form following his latest win at the Porsche European Open last week, which was his third title on European soil.

The 45-year-old will feature in his first Presidents Cup for the International Team against the United States in Korea next week before heading to Macao, hoping to land a 14th career title on the Asian Tour.

“I’m looking forward to returning to the Venetian Macao Open which is always a great tournament to compete on the Asian Tour.

“We get to play on a challenging course and stay in a nice resort at The Venetian Macao. My record at the Macau Golf and Country Club is pretty good over the past three years with two top-10s and one top-20, but hopefully this time, I will be able to challenge for the title,” said Thongchai.

Prior to his latest triumph in Germany, Thognchai, who is a former paratrooper, enjoyed two runner-up finishes earlier this year and has since risen to 32nd spot on the Official World Golf Ranking, matching his previous career highest ranking.

“My 2015 season has been pretty solid and qualifying for the Presidents Cup team is also a key highlight for me. Although I’ve won tournaments in Europe over the past few years, it’s actually been five years since I last won on the Asian Tour and I hope to break that drought. Winning the Venetian Macao Open will be a very nice addition to all my victories in Asia,” said Thongchai.

Fan favourite Kiradech, who is well known for his big-hitting and aggressive game, has won twice on the European Tour this season in China and Scotland, and is looking forward to a third visit to the Venetian Macao Open.

“This will only be my third visit to the Venetian Macao Open but it’s certainly one of the events which I look forward to competing. The players are looked after so well by the title sponsor and Macao is also a great city to visit as there are so many things to do away from golf,” said the 26-year-old.

“It has been a great season so far for me with two wins and if I can continue to play my best golf in Macao, I know I will be able to contend when I get there. It is also important for me to finish the year strongly on the Asian Tour as I want to break into the world’s top-50 by the end of the season and get myself into the Majors and World Golf Championships events,” added Kiradech, who is presently ranked 63rd in the world.

Other stars who have committed to the Venetian Macao Open include title holder and current Asian Tour Order of Merit leader Anirban Lahiri of India, former champion Scott Hend of Australia and Major winner Ernie Els of South Africa.

The prestigious tournament, into its 17th edition, will see its total prize fund increase for a third consecutive year, taking it to the all-important US$1 million mark.

Since its inauguration in 1998, many other world class golfers have graced the fairways of Macau Golf & Country Club, including Lee Westwood (winner in 1999), Colin Montgomerie (winner in 2003), Nick Faldo, Padraig Harrington, Fred Couples, Ian Woosnam and Mark O’Meara .

The Venetian Macao Open is organised by the Macao Sport Development Board of Macao SAR Government and the Golf Association of Macau. Sanctioned by the latter and the Asian Tour, The Venetian® Macao is supporting the iconic event as title sponsor for the fourth successive year.