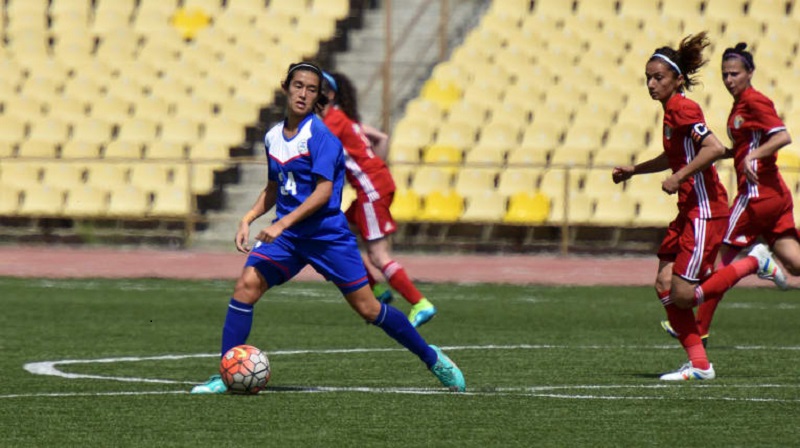 A transformed Philippines Women’s national side will be hoping to spring a surprise on their opponents when they open their campaign in the AFC Women’s Asian Cup in Jordan.

Since making the cut last year, the squad has undergone several changes with a significant complement of US-based players of Filipino heritage joining the team in recent months.

Only a handful of players have survived the squad that qualified a year ago, with captain Patrice Impelido, goalkeeper Inna Palacios and playmaker Sara Castañeda among those who have retained their places.

A number of the more recent arrivals boast impressive résumés in American college soccer, including Ryley Bugay and Jessica Miclat, who have both previously been invited to attend US national team camps at youth level.

“(I don’t think) China, Thailand and Jordan have any information about the Philippine national team,” said newly appointed head coach Rabah Benlarbi, after the team’s farewell dinner in Manila.

A 21-year-old midfielder, Castañeda played a crucial role in the Malditas’ qualification for Jordan 2018, scoring in four consecutive matches including the crucial late equaliser against Bahrain.

Castañeda capped a superb 2017 by being crowned the PFF Women’s League’s Most Valuable Player.

“They will think that the team they will play against will be the last Philippine national team (that competed in the AFC Women’s Asian Cup qualifiers).

“They will be surprised to see 80 or 85 percent of new players and also a new coach.”

The Southeast Asian side have hit the ground running under Benlarbi, winning both matches in their two-game training camp in Japan, with their 3-2 success over professional outfit FC Speranza Osaka-Takatsuki arguably their most impressive result since last April.

Despite being the lowest-ranked side in the tournament at 72nd in the world, Benlarbi is confident his team are capable of surprising their more established rivals.