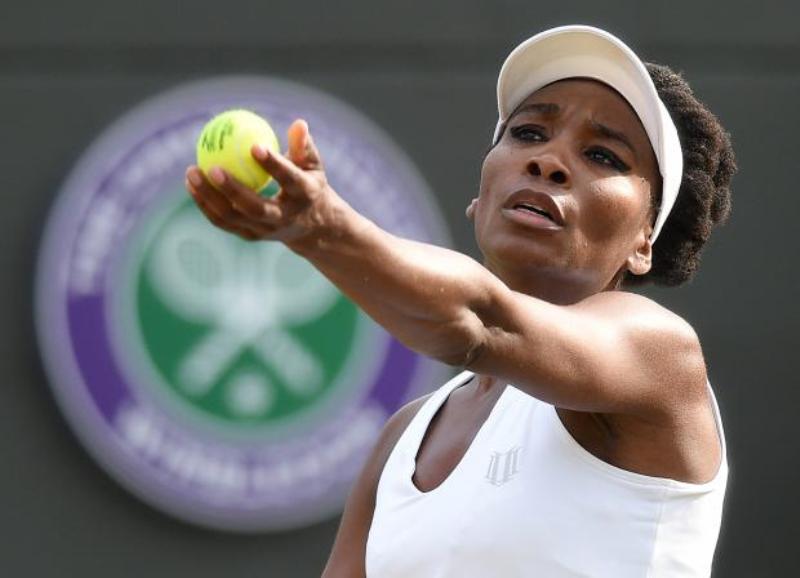 Angelique Kerber crashed out of Wimbledon and lost her hold on the world number one ranking, while five-time champion Venus Williams became the oldest All England Club quarter-finalist in 23 years on Monday.

Amid a scheduling row that saw accusations of sexism aimed at Wimbledon chiefs after they put just two women’s matches on the main show-courts, Williams wasn’t the only star savouring a historic last 16 triumph.

Johanna Konta, the bookmakers’ favourite for the title, became the first British woman to reach the quarter-finals since Jo Durie in 1984.

The 29-year-old, who lost to Serena Williams in the final 12 months ago, has failed to make the last eight at any of this year’s three Grand Slams.

“It was the best match for a long time for me, so I think I’m still on a good way even though I lost.”

Kerber, who had taken the top ranking from Serena in March, will be replaced at number one by either Karolina Pliskova or Simona Halep.

Halep, the Romanian world number two, defeated Victoria Azarenka 7-6 (7/3), 6-2 and will be guaranteed top spot if she beats Konta in the last eight.

If Halep, a two-time French Open runner-up, loses to the Briton, then Czech world number three Pliskova will be the new number one despite losing in the second round.

Muguruza, the 2015 Wimbledon runner-up, goes on to play Russian seventh seed Svetlana Kuznetsova for a place in the semi-finals.

Former US and French Open champion Kuznetsova, 32, reached her first Wimbledon quarter-final in 10 years with a 6-2, 6-4 win over Polish ninth seed Agnieszka Radwanska.

With Centre Court and Court One largely taken up by four men’s matches, Kerber was exiled to the less grand Court Two.

It was a decision that brought criticism for Wimbledon organisers and Kerber was visibly frustrated by the state of surface after she slipped on several barren patches of grass on the baseline.

Kerber twice led by a break in the final set, but couldn’t close out the victory and she was quick to attack the court scheduling.

“To be honest, I was really surprised that I was playing on Court No. 2. I was actually looking forward to playing on one of the two big courts,” she said.

Williams made her Grand Slam debut at the 1997 French Open, seven months before Konjuh was born.

And at 37 years and 29 days, Venus is Wimbledon’s oldest female quarter-finalist since Martina Navratilova in 1994.

Seven-time major winner Venus, who clinched the last of her Wimbledon titles in 2008, will hope to emulate Navratilova, who went on to reach the final 23 years ago.

“I’m playing pretty solid. Winning never gets old at any stage in your career, ever,” said Venus, who expressed sympathy for Kerber over her court row.

“I’ve been in that position before. Similar,” Venus added.

Williams plays French Open champion Jelena Ostapenko for a place in the semi-finals.

Ostapenko, the 2014 junior Wimbledon champion, joined the sexism row as she admitted she was surprised not to be put on a larger court.

“I thought we would play on a bigger court. Elina is No. 4 in the world. I think our match was very interesting for the people to watch,” the Latvian 13th seed said.

Konta is aiming for a second Grand Slam semi-final appearance following her run at the 2016 Australian Open.

Virginia Wade was the last British woman to win Wimbledon in 1977.

“It’s pretty special. I’m very excited about that and really looking forward to the fact that I get to play again,” Konta said.

Slovakia’s Magdalena Rybarikova is into her maiden Grand Slam quarter-final after a 6-4, 2-6, 6-3 win over Croatian qualifier Petra Martic.

Next up for the world number 87 is a clash with American 24th seed Coco Vandeweghe.

Vandeweghe moved into her second Wimbledon quarter-final with a 7-6 (7/4), 6-4 victory over former world number one Caroline Wozniacki. – Agence France-Presse