Home News Vietnam, the only ASEAN team in AFC U16 quarter-finals 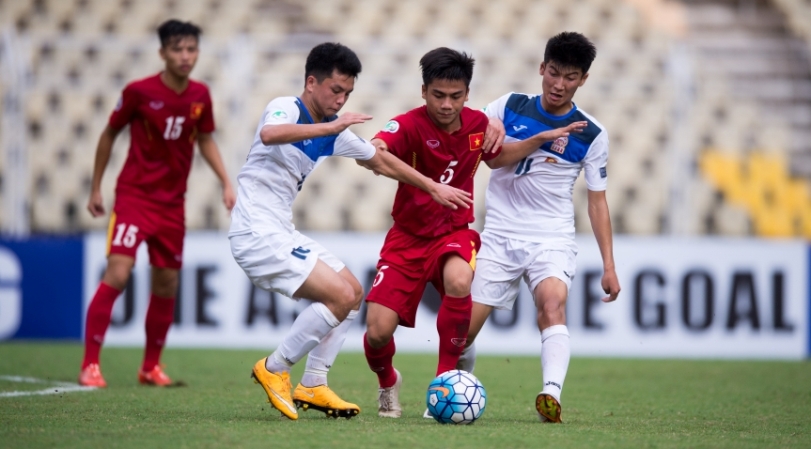 Vietnam booked a quarter-final date with Islamic Republic of Iran in the AFC U-16 Championship India 2016 after a 3-1 win over Kyrgyzstan saw the Southeast Asians claim the runner-up spot in Group B on Thursday.

The Central Asians opened the scoring early on at Pandit Jawaharlal Nehru Stadium through Gulzhigit Alykulov only for Vietnam’s Nguyen Khac Khiem to hit back 20 minutes in as the tie remained firmly in the balance at the interval.

The unlucky Emir Shigaibaev headed into his own net after a mistake by goalkeeper Elgard Sychev on 80 minutes before substitute Nguyen Tran Viet Cuong rounded off the scoring three minutes from time as Vietnam set up a clash with Group A winners Iran on Sunday.

Needing to overcome their Southeast Asian opponents to advance to the quarter-finals at the first time of asking, Kyrgyzstan responded in perfect fashion to their 8-0 reversal to Japan by taking the lead in the sixth minute.

Alykulov picked up the ball 30 yards from goal and broke into the left side of the penalty area before shifting it to his right foot and curling a delightful effort from just inside the box beyond the reach of goalkeeper Huynh Huu Tuan into the bottom left corner.

Fresh from their stunning come-from-behind win over Australia, though, Vietnam fought back strongly and were back on level terms thanks to Khac Khiem’s goal on 20 minutes.

Nguyen Huu Thang delivered a dangerous inswinging free-kick from the right that was only partially cleared by the Kyrgyzstan defence, and when Nguyen Xuan Kien’s volley back in deflected up onto the bar Khac Khiem was on hand to tap home.

Vietnam began to control the game thereafter with Huu Thang dictating the play from the centre of the park.

And the ball ended up in the Kyrgyzstan net once more three minutes before half-time after Shigaibaev’s miscued clearance from Ngyuen Huynh Sang’s low cross, but the midfielder was fortunate to see the assistant referee had flagged for an earlier offside.

Then shortly before the hour Samat Suimaliev’s team came close as Gulzhigit Borubaev’s free-kick from 25 yards was touched onto the crossbar and over by Huu Tuan.

Vietnam were less of an attacking threat in the second period, opting to sit back and defend in the knowledge that a point would confirm their passage to the last eight.

Kyrgyzstan then threw midfielder Adilet Kanybekov, scorer of their only previous goal of the campaign, and striker Aziret Momoshev into the mix ahead of the final 10 minutes as Suimaliev made his final roll of the dice.

But then an almighty blunder by Sychev in the 80th minute all but sealed Kyrgyzstan’s fate.

Substitute Vu Dinh Hai’s floated free-kick from the right looked to be a simple catch for the custodian but the ball slipped through his hands, off the head of Shigaibaev and over the line.

And Vietnam wrapped up the win with three minutes to play as Dinh Hai’s low cross from the left was side-footed across Sychev and into the bottom right corner by Nguyen Tran Viet Cuong.

Vietnam coach Dinh The Nam:
“Our players didn’t start the game well and they began strongly which made it difficult for us. However, there was a lot of time left after their goal so we had time to change some things and motivate the players.

“I told them to get close together and support each other. As we said before, the target was not to draw. We had to set them a higher target than that so they would try harder – if we went for a draw maybe the players wouldn’t try as hard.

“We told them at half-time to attack more and keep trying to score more goals. Fortunately their goalkeeper’s mistake gave us the chance so, of course, we had a bit of luck.”