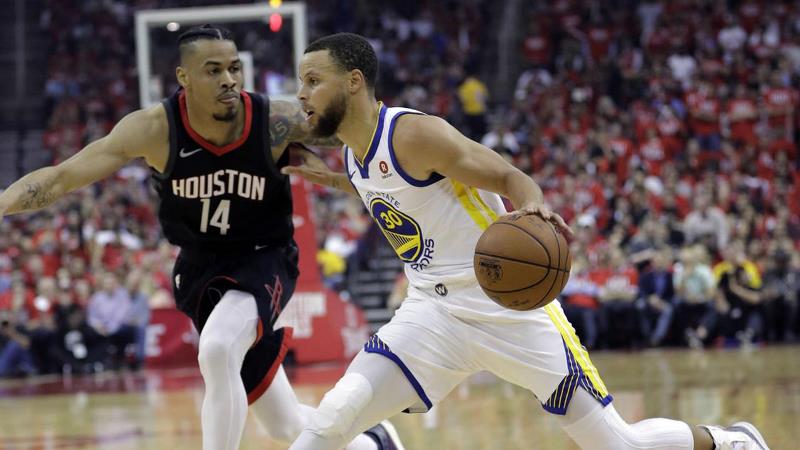 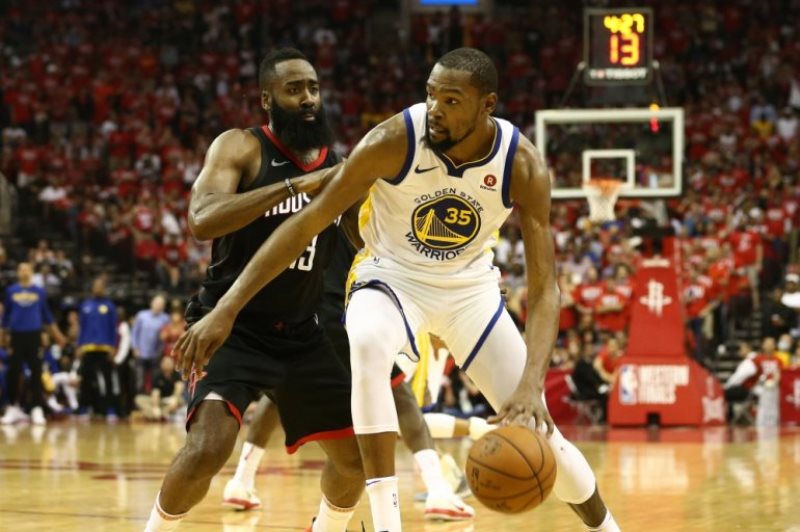 Season wins leader Houston battled an entire campaign to seize a home-court edge throughout the NBA playoffs, but defending champion Golden State stole it away with a 119-106 victory Monday.

Kevin Durant scored 37 points and Klay Thompson added 28 for the Warriors to capture the best-of seven Western Conference final opener in a rare series start on the road for a team seeking its third NBA crown in four seasons.

“We’re just trying to win every game we play,” Warriors forward Draymond Green said. “It ends up being ‘stealing home court’ but we don’t look at it that way. We won one game on the road. Let’s try to win two.”

“It’s a great start. We played well,” said Thompson, who scored 11 points in the fourth quarter. “We’re not going to relax. We’re still not where we want to be. We still have a long way to go.”

“We’ve got to do a better job of taking better shots, not turning the ball over and getting back on D,” Harden said. “We’ve got to make them rotate and take tougher shots.

“They do a really good job if you take bad shots or turn the ball over. That’s what they thrive on. Those mistakes can’t happen.”

Durant scored 17 first-half points and sparked Golden State after the Rockets played aggressively at the start, using two big runs to jump ahead only to have the Warriors overtake them by the middle of the second quarter.

“You know they are going to come out with a lot of energy,” Durant said. “We just tried to take their best punch and keep fighting.”

“To withstand that run says a lot about our team,” Green said. “The further you get along in the playoffs, the more intensity you need to bring.”

Rockets coach Mike D’Antoni knows that all too well.

“If we’re going to knock these guys off we have to get a better mental focus,” D’Antoni said. “We ran out of gas a little bit in different spots and they didn’t.

“It’s just a bunch of stuff we can clean up and we will. We’ll come out and attack them Wednesday.”

Chris Paul had 23 points and 11 rebounds for the Rockets, who fell behind in the third period and couldn’t catch up in the fourth.

“Every time we made a mistake they made us pay,” Paul said. “Some of it was breakdowns, things we can clean up and do better. We have to communicate better.”

Durant says the Warriors know Harden will always be a threat but Golden State must remain poised against a Rockets lineup that can unleash a barrage of 3-pointers if their focus lapses.

“We know James is always going to score over us. We just had to keep solid and keep playing hard,” Durant said.

“This Houston team never stops. They are always in the game with 3-point shots. We play a calm steady game, look for a good shot and play good D every time down.”

Thompson had a 3-pointer and two free throws in a 10-2 Warriors run that Durant capped with a 3-pointer for a 100-87 lead with 7:58 remaining in the fourth quarter. Houston never threatened again.

“We can do a little better job against them mentally,” D’Antoni said. “They are champions for a reason. If we want to beat them we have to be mentally sharp.

“KD was on. We can live with that. But we can’t have that and mental mistakes.”

The Rockets jumped ahead 9-2 and 21-12 but the Warriors battled back, taking their first lead of the game at 35-33 on David West’s layup 2:57 into the second quarter.