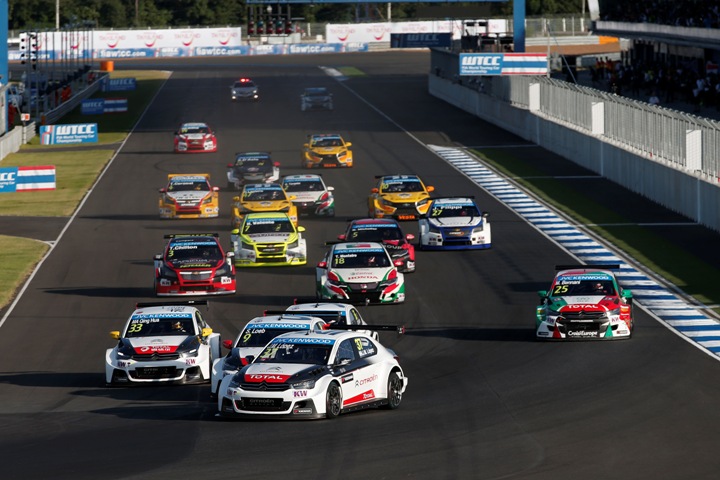 
Eurosport Events, the promoter of the FIA World Touring Car Championship, is thrilled to announce TAG Heuer as the Official Timing Partner of the WTCC.

Founded in Switzerland in 1860, TAG Heuer links up with the WTCC during an extremely exciting chapter in the championship’s history: the introduction of WTCC Manufacturers Against the Clock (WTCC MAC3), a team time trial contest inspired by professional cycling and a first for global motorsport, where timing means everything.

WTCC MAC3 encapsulates the essence of TAG Heuer’s #dontcrackunderpressure campaign with some of the best touring car drivers in the world vying to go as fast as possible but never cracking under pressure by putting in a faultless performance to deliver a winning team result.

TAG Heuer’s decision to partner with the WTCC stems from the company’s desire to be faithful to its DNA as a motorsport timekeeper, a function it pioneered more than five decades ago.

But the partnership goes much further and will result in the creation of dedicated WTCC online content based on the #dontcrackunderpressure tagline, sponsorship of the live WTCC broadcasts on Eurosport, trackside branding and VIP hospitality programmes. The TAG Heuer Performer Award will also be handed to the driver setting the fastest race lap during each race weekend.

“We are super-happy that we have helped TAG Heuer go back to being a timekeeper in an international motorsport championship,” said François Ribeiro, Head of Eurosport Events, the WTCC promoter. “It’s a brand with an unparalleled heritage in motorsport and timekeeping in particular. After a one-year technical partnership with TAG Heuer we’re delighted to bring the company on board as an Official Series Sponsor. Eurosport Events is not just the promoter of the WTCC, we’re a media group with storytelling and emotion are firmly entrenched in our DNA, making the association with TAG Heuer under the #dontcrackunderpressure campaign such a good fit.”
“Sport is emotion, it is success, joy, hope, endurance, performance. All the qualities that are also found in a TAG Heuer watch,” said Jean-Claude Biver, CEO of TAG Heuer and President of the LVMH Watch Division. “Swiss Avant Garde since 1860 is our slogan. It’s a state of mind that drives us, today more than ever, to be disruptive, connected to the future, and innovative. Our activity with the WTCC will bring together all these ingredients, those of a Swiss luxury, young and dynamic brand which has all the hallmarks of a high-end product, but one which is still accessible.”

The FIA-sanctioned WTCC is fast, frantic and embarking on a flat-out global tour in 2016 with 24 all-action races in Africa, Asia, Europe, the Middle East and South America from April to November. Emerging young stars take on category experts and ex-grand prix drivers in race-ready versions of punch-packing road cars from Chevrolet, Citroën, Honda, LADA and Volvo.

The WTCC calendar includes stops at Formula One venues past and present, demanding modern facilities, challenging street tracks, plus the infamous Nürburgring Nordschleife with its 25.378-kilometre lap and 64 heart-stopping turns. In the races strategy goes out of the window as drivers push hard from start to finish without the need to make pit stops. The door handle-to-door handle, bumper-to-bumper nature of the racing means contact can and does happen. Tempers can rise and friction occurs.