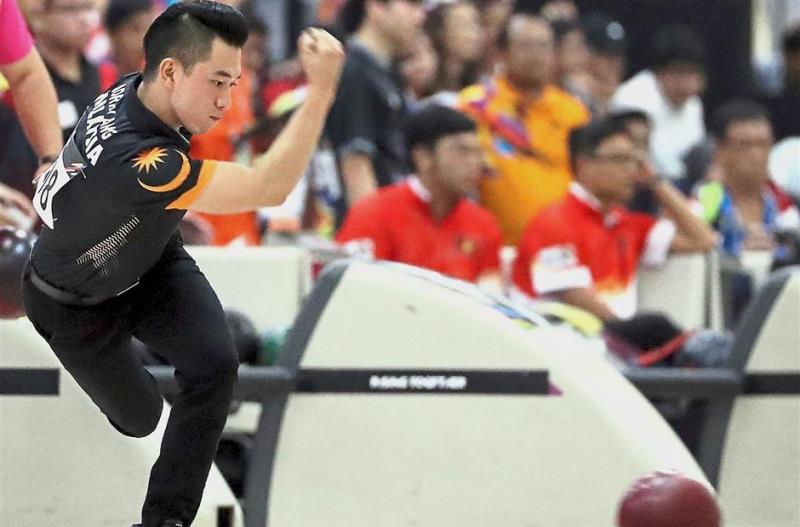 Adrian Ang left it to the last three games to confirm his place for the next stage this evening when he finished 16th to be among the 24 qualifiers for today additional eight games in the Qubica AMF 55th Bowling World Cup at Bowling Centre, Jakabaring Sports City, Palembang.

He had started the day with 197, 192 and 192. South Africa’s Francios Louw continued his consistent performance to lead from day one till yesterday, to finish with a of total 5520 with an average of 230 to lead by 188 pinfalls to second placed Germany’s Oliver Morig (5332).

In third spot was Korea’s Lee Wanhee with his total of 5155 and Indonesia’s Ryan Lalisang maintaining his overnight fourth spot with 5128.

Defending champion Sam Cooley from Australia finished fifth with a total of 5115. Singapore’s Eugene Yeo almost scored a perfect game in his final game but had to settle for 289 which elevated his 20th spot prior to that, to finish 13th from his total of 4893.

“I am glad things fell in place in the final three games after so much agony the past three days,” said a relived Adrian.

“But I need to do better because I need to move further up to be among the top eight tomorrow to make the cut for the quarterfinals round.

“It is only going to get tougher as everyone especially those on borderline of the eight spot and others who are a few rungs will be battling to make the cut.

“The top four or five spots are very unlikely to falter at this stage especially with pinfalls carried forward, thus it is further going to intensify the battle.

“I just hope I can continue with performance in my last three games yesterday if not better it to make a chance to make the last eight.

“But there are eight games, and I believe I can make the cut. I am going to give everything I have and hope all falls in place.

“This being my third attempt at this championship, naturally I want to do better than my previous outings,” said Adrian having finished 17th in his debut appearance in 2006 in Venezuela and 23rd in Johannesburg, South Africa in 2011.

The last three days has been agony for the 31-year-old Penangite who has been trying so hard to make delivery good which did not have enough rev, and finding the line and staying consistent further aggravated his problems.

The strikes were not coming in and when they came, he could not connect. Although he spared well it was not good enough for high scores coupled with several open frames.

After and opening game of 197 and remaining in his overnight 23rd spot, Adrian looked like he picked himself up and was doing well until he left his last three frames open, which cost him dearly when he could only muster 192 and dropped to 24th spot.

It was no different in game three when an open frame on the 9th saw him with another 192 game and continue to remain on the borderline of qualification.

Adrian finally picked himself up in game 4 when he strung a bagger before another three from frames 6 to 9 and finish off with spares for a 241 which was his highest score in three days.

His previous high game was 236 on the opening day in his final sixth game. That also saw him move from his 23th spot to 19th.

Having found his rhythm, he fired 247 to improve on his previous high game and move one more rung higher to 18th. And his final game of 215 put him in a fighting zone for to make the cut for quarterfinals today.

Quarter Finals Round Robin will see the bowlers bowl a further 8 games league style, round robin with bonus points (30 pins for a win, 15 pins for a tie, 0 pins for a loss).

From Adrian’s urrent position of 16th, the difference in pinfalls to the eight spot is 113 pins where Kuwait’s Jasem Alsaqer is placed with a total of 4988. Adrian cannot afford to make any more mistakes and have to shoot high and be consistent to stand a chance to make the last eight.