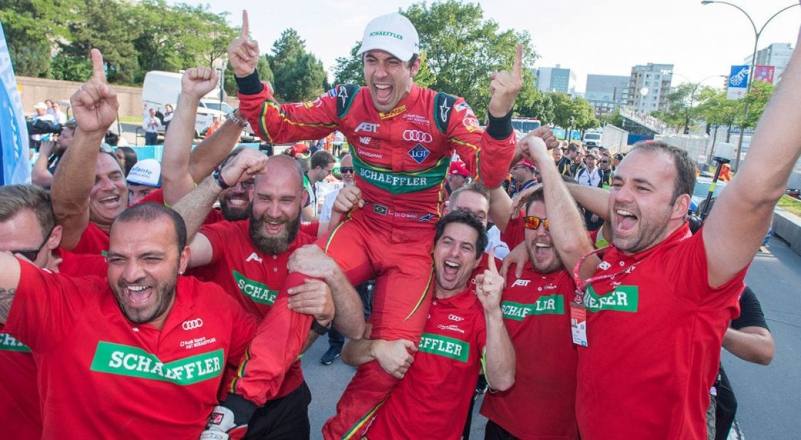 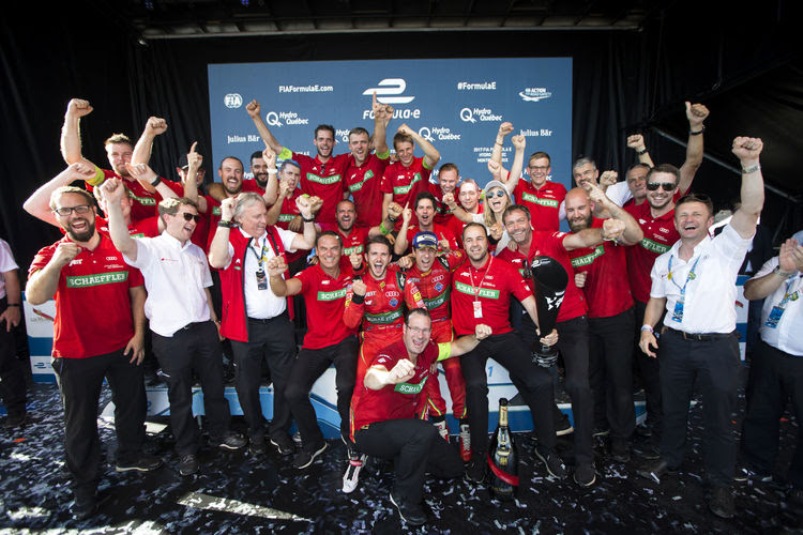 ABT Schaeffler Audi Sport vice-champions in the teams’ classification

Audi driver Lucas di Grassi is the new champion of the worldwide Formula E electric racing series. After taking the lead of the standings with a lights-to-flag victory in the first of the two final races in Montreal (Canada), the Brazilian from Team ABT Schaeffler Audi Sport wrapped up the title on taking seventh place on Sunday.

Di Grassi had arrived in Canada for the final weekend with a ten-point deficit to Renault driver Sébastian Buemi. While the Swiss was ostensibly tense and, following an accident in free practice, had a horrible day on Saturday, di Grassi made no mistakes and converted his deficit with his pole position and lights-to-flag victory in an 18-point advantage.

On Sunday, di Grassi and his teammate Daniel Abt started from the third row while Buemi only took position 14 in qualifying. Following a turbulent starting phase, di Grassi and Abt dropped to positions nine and ten some of the time but, also thanks to clever energy management, were able to fight back to positions six and seven. As a result, Team ABT Schaeffler Audi Sport secured the vice-championship in the teams’ classification as well.

“Today is the best day in my career,” the new Formula E Champion enthused after the race. “I’ve believed in Formula E from day one because the world, including motorsport, is changing. Three years ago, we won the first Formula E race in Beijing and now finally the title as well. ABT Sportsline, Schaeffler and Audi Sport have done a perfect job – not least after the races in New York where we weren’t so strong. Here in Montreal, on the best race track Formula E has ever seen, we were fast from the beginning.”

Following third place in Formula E’s inaugural year and the vice-championship last year, Lucas di Grassi is the third champion in the world’s first all-electric racing series and, with a total of six victories and 20 podium results in 33 races, one of the most successful Formula E campaigners. In the 2016/2017 season, the Audi driver won two races, clinched three pole positions and seven podium places in twelve races. Only in Paris, di Grassi scored no points. In the end, this consistency was decisive in the title race, although his comebacks at the season opener in Hong Kong and on clinching victory in Mexico will remain equally unforgotten.

“For me, Lucas di Grassi is currently the most complete driver in Formula E,” says Head of Audi Motorsport Dieter Gass. “What he showed in Montreal on Saturday was simply fantastic. After New York, there probably weren’t a lot of people expecting him to be able to turn the tables in the title race anymore. But Lucas never gave up for even a second and continually motivated the whole squad to deliver top performances. The entire team around Hans-Jürgen Abt and Thomas Biermaier did an outstanding job and Daniel Abt, who was beaten a little below his potential this year, drove strong races in Montreal too. This has been a tremendous finale and a good week on the whole for Formula E.

“That, after BMW, Mercedes-Benz and Porsche are going to follow us into this forward-thinking racing series underlines the growing importance of fully electric motorsport. I’m already looking forward to the opener of the new Formula E season in Hong Kong in December when our factory-backed commitment opens up a new chapter in Audi’s motorsport history. With ABT and Schaeffler as our partners we’re in a very good position in the increasingly tougher competition.”

Lucas di Grassi was born in São Paulo on August 11 and lives in Monaco together with his wife, Bianca. The Brazilian won the prestigious Formula 3 Grand Prix in Monaco in 2005 and was active in Formula 1 as a test and race driver before joining Audi in the World Endurance Championship (WEC) in 2012 and mounting the podium in the Le Mans 24 Hours three times. As a test driver from day one, he helped make Formula E reality. Now, he is its new champion.