Home Football Bale gets Madrid back to winning ways

The Welshman silenced his critics as Madrid snapped a three-game winless streak to ensure they go into next weekend’s El Clasico at the Camp Nou on Barcelona’s tails.

However, Cristiano Ronaldo didn’t appear overjoyed to see his teammate get back on the scoresheet as he cut a frustrated figure having seen his initial efforts lead to both Bale’s goals.

“Everyone understood what we had to do and what we have to do next Sunday.”

The Italian responded to Tuesday’s stunning 4-3 defeat at home to Schalke in the Champions Leagueby recalling Luka Modric and Sergio Ramos to the starting line-up for the first time after long-term spells on the sidelines, whilst Keylor Navas was given a run out in goal ahead of the under fire Iker Casillas.

And Ancelotti recognised that Bale was a lot more comfortable with his old Spurs teammate Modric alongside him.

“The influence of Modric is positive. It gives Bale more opportunities to be involved in the game,” added Ancelotti.

“They played together at Tottenham and he is definitely more comfortable with Modric.”

Up front Los Blancos looked back to their best early on as Bale fired an acrobatic volley over before all of the front three were involved in a move that ended with Ronaldo striking the post.

Modric was also providing a creative spark that had been missing in recent weeks and he started the move for the opener.

The Croatian fed Benzema and when Ronaldo’s overhead kick from his cross was cleared off the line by Ivan Ramis, Bale was on hand to sweep home the rebound with his weaker right foot.

Tono Garcia then denied Ronaldo a certain tap in from a low Bale cross with a last-ditch challenge, whilst Simao turned another centre from Bale onto his own bar as the one-way traffic continued.

And the hosts did finally double their advantage five minutes before the break when a fierce driven effort by Ronaldo was turned in from close range by Bale.

Perhaps understandably Madrid’s intensity dipped after the break, but there was one moment of stunning quality as Benzema flicked Ronaldo’s cross with the outside off his boot off the bar.

Earlier, Sevilla moved to within four points of Atletico Madrid in fourth with a routine 3-0 win over Elche thanks to two goals from Carlos Bacca and a late strike by Kevin Gameiro.

Villarreal remain in sixth after playing out a 0-0 draw at struggling Almeria, whilst Cordoba are still rooted to the bottom of the table as they lost 2-0 at Malaga. – Agence France-Presse 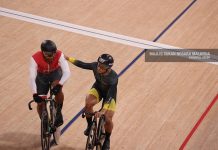