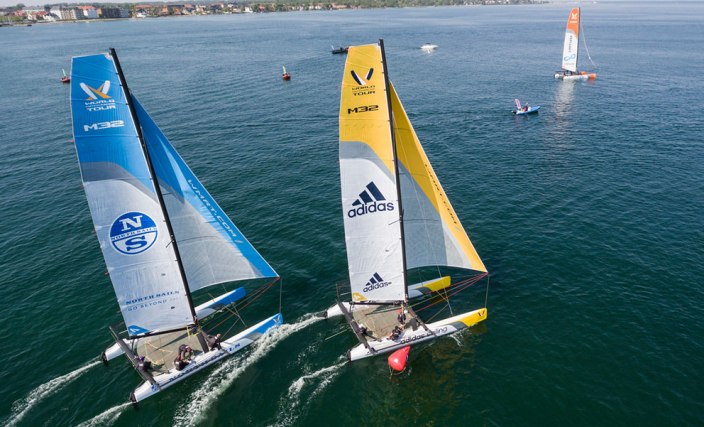 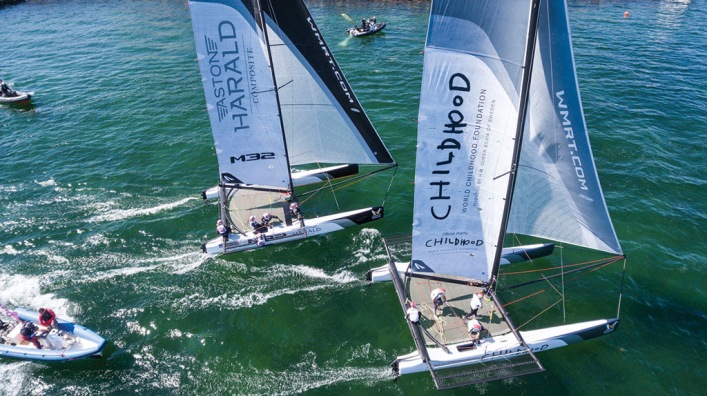 Sally Barkow (USA), Team Magenta 32, was pulled up yesterday for swearing live on camera at the World Match Racing Tour in Copenhagen, so she has resorted to an angry growl as her family-friendly alternative to letting off steam.

There was plenty of growling from the Team Magenta 32 skipper this afternoon, but plenty of grinning too in her ding-dong match against Johnie Berntsson (SWE), Flux Team. As the previous M32 Tour event in Fremantle proved a few weeks ago, the lead changes in a catamaran match race can be far in excess of what we saw on the old format Tour in monohull keelboats.

All three of the Barkow v Berntsson matches were humdingers, the result never certain until the end. But with three matches down, the Swede sits on match point for tomorrow’sconclusion of their Super 16 match-up. Barkow’s head was spinning from all the frenetic action on board. A lot easier, she said, to call tactics when you’re watching from shore than it is from your own boat in the thick of battle.

Today was Berntsson’s first experience of match racing in the M32 yet he took to it like a duck to water. He’s not short of years on the Tour, but it was impressive how quickly he is putting the game together in this new format. “I’m learning as we go round the course, just listening to what my crew tell me to do. They’re my coaches and I just need to keep on doing what I’m told.”

There were twists and turns in the duel between Ian Williams (GBR), GAC Pindar and Evan Walker (AUS), KA Match/ CYCA, particularly in the second match. The reigning World Champion was all over the young Aussie in the pre-start, shutting him out of the start line and surging to a massive, impenetrable lead.

Or so it seemed, because the breeze – although averaging 12 knots – was fickle and shifty and Williams seemed to fall out of phase towards the final top mark. Walker closed the gap and found himself within striking distance down the final run when he managed to roll GAC Pindar for the most unlikely of comeback victories.

That said, Williams still sits on match point with a 2-1 lead this evening.

Taylor Canfield (ISV), US One, leads Sam Gilmour (AUS), Neptune Racing, 2-0, and it’s 2-0 so far for Yann Guichard (FRA), Spindrift racing, versus Michael Hestbaek (DEN), Team Hydra. But the Olympic Dane is dangerous and remains optimistic that he can overturn the Frenchman’s advantage. In his earlier battle with Hans Wallén (SWE), Wallén Racing, he dispatched the Fremantle finalist 2-0, so Hestbaek shows that he fears no one despite his lack of M32 match racing experience.

Volvo Ocean Race veteran Bouwe Bekking made an appearance at the event today, catching up with his former Volvo rival Iker Martinez (ESP), Team Espana, who was one of those that didn’t race today. The Spaniard’s turn will come tomorrow when he goes up against the young Kiwi Chris Steele (NZL), 36 Below Racing.

The 49er Olympic Champion is sailing with a very experienced crew that includes his former Luna Rossa America’s Cup team mate Pierluigi de Felice, Volvo Race veteran Pablo Arrarte and up and coming 49er talent Diego Botin. “The Tour is a great place to be, the boats are super exciting and these events have the right profile for our sponsors. Now we just have to learn the art of match racing, because there is not much history of match racing in Spain.” With multiple matches per day, Martinez couldn’t have found a better place to learn his trade.

Thursday sees the conclusion of the Super 16 to determine which of the original 20 teams makes it through to the Quarter Finals in sunny Copenhagen. Live coverage will be shown at www.wmrt.com from 1400 local Danish time.