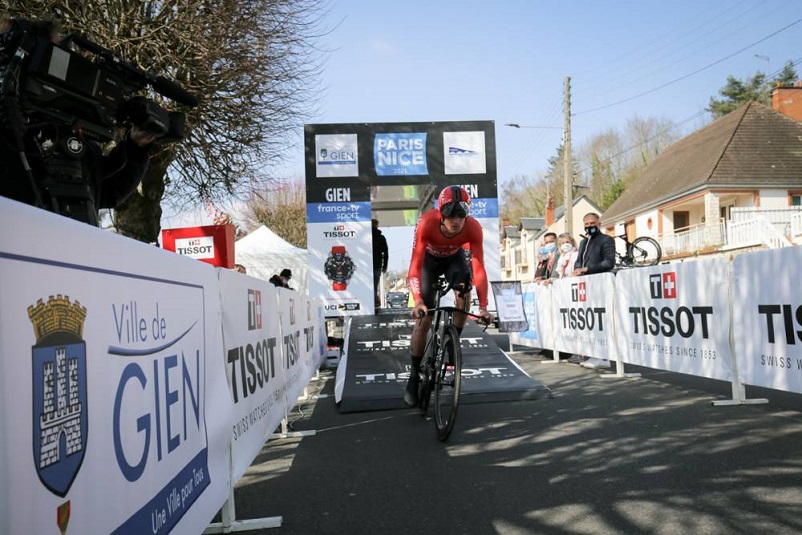 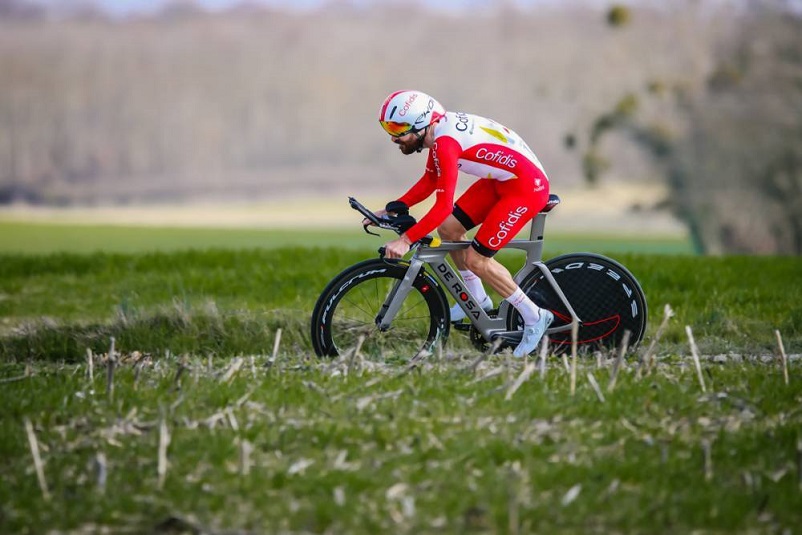 Young Swiss rider Stefan Bissegger (EF Education–Nippo) came out on top in today’s thrilling 14.4 km time trial around the charming town of Gien, on the banks of the Loire.

The 22-year-old from Thurgau, who is part of a new generation of riders bursting onto the stage of international cycling and finished runner-up to world champion Filippo Ganna in the recent UAE Tour, rode at an average speed of more than 49 km/h to finish the stage in 17′34″ and edge out Deceuninck–Quick-Step’s Frenchman Rémi Cavagna by mere hundredths of a second.

Meanwhile, the big favourite to win Paris–Nice, Primož Roglič, had to settle for third, six seconds behind the leading duo and just ahead of American Brandon McNulty (UAE) and Søren Kragh Andersen (Team DSM), the victor in last year’s time trial in Saint-Amand-Montrond. Bissegger also wrested the leader’s yellow jersey from Michael Matthews, who finished 23″ behind the winner after mounting a gallant defence.

Starting in 13th place, Australian Rohan Dennis set the bar sky-high from the beginning. The two-time world champion rolled over the finish line at the bottom of the Château de Gien with a time of 17′47″, almost a minute faster than the previous riders.

However, his place in the hot seat was placed in constant jeopardy by other specialists in the race against the clock, including teammate Dylan van Baarle, who came within a second, two-time New Zealand time trial champion Patrick Bevin, who finished just three seconds down, and Dutchman Steven Kruijswijk, seven seconds back.

The threat materialised when Søren Kragh Andersen (Team DSM), the winner of last year’s time trial in Saint-Amand-Montrond, posted the fastest time at the intermediate time check, two seconds ahead of Dennis, and bested the Australian by three at the finish line.

The Dane’s prospects of winning the time trial stage two years in a row were starting to look good. All that was left was for his time to withstand the assault of other specialists such as Victor Campenaerts, who ended up faltering, popular favourite Primož Roglič and Frenchman Rémi Cavagna, who flew on the banks of the Loire… as well as Bissegger, who had already displayed his capabilities in the UAE Tour.

Bissegger brings the hammer down

After going through the intermediate time check at km 6.7 with a slight deficit, Roglič surged in the second half of the course to move into the lead with a time of 17′40″. However, the Slovenian was in the sights of Cavagna, who dug deep in the last few hundred metres to topple the runner-up in last year’s Tour de France with a time of 17′34″.

Yet the Frenchman would end up ruing the tiny amount of time lost trying to overtake Kristian Sbaragli in the finale. Starting shortly after “the TGV from Clermont-Ferrand”, Stefan Bissegger matched Cavagna pedal stroke for pedal stroke before snatching victory from him by a meagre 0.83 seconds on the line.

Meanwhile, Michael “Bling” Matthews doggedly hung on to his overall lead by two seconds at the intermediate time check, but he faded in the last few kilometres to finish 23″ down on the young Swiss rider, the undeniable author of the breakout performance of this edition.