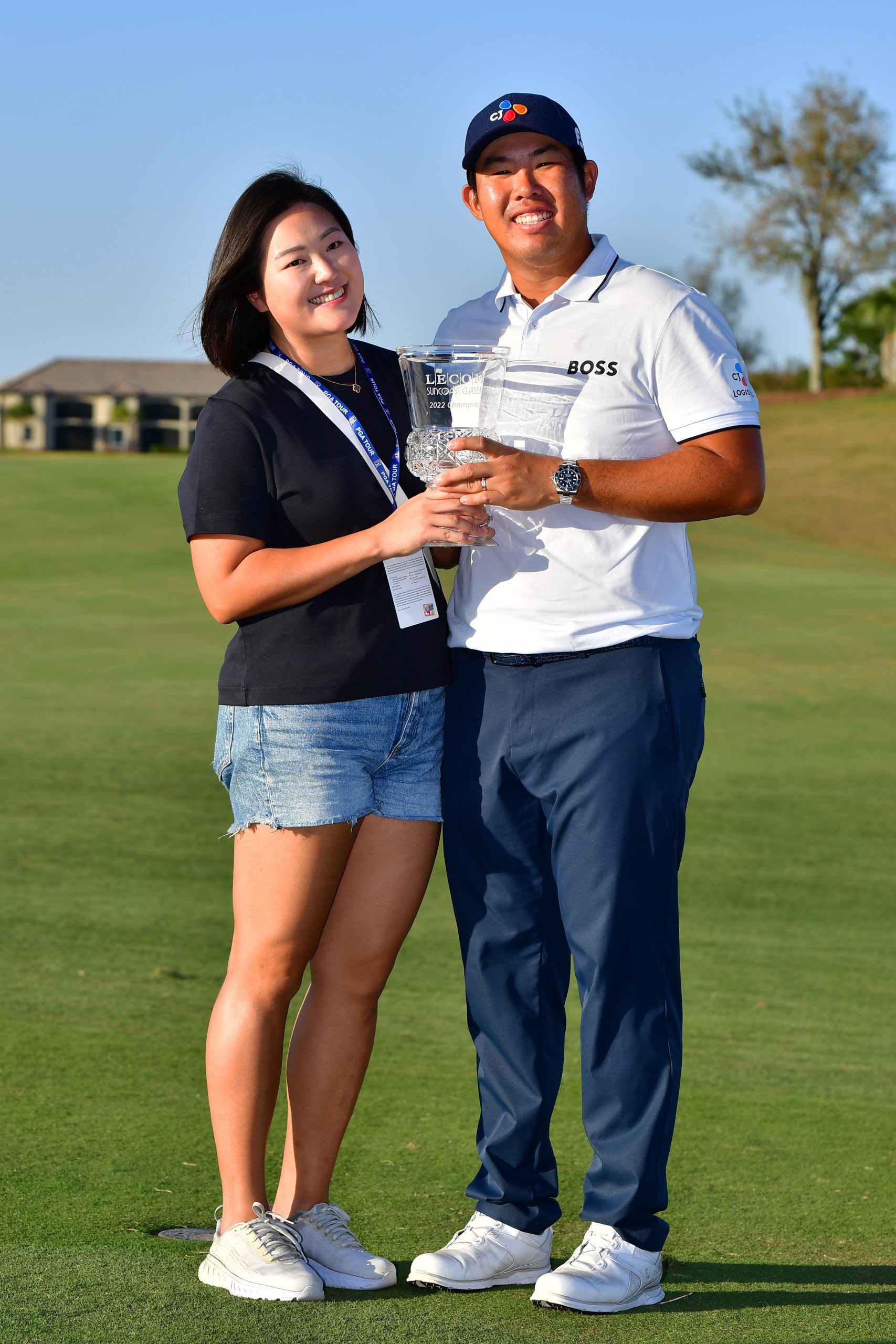 Despite self-described “mediocre” third and final rounds, PGA TOUR veteran Byeong Hun An emerged from the 2022 LECOM Suncoast Classic with his first TOUR-sanctioned victory and first worldwide win since 2015. An followed Saturday’s 4-under 67 with a 2-under 69 in Sunday’s final round, taking him to 17-under par for the week and securing a one-stroke victory over four different players at T2.

“It was a long day,” An said. “I was grinding all day. Last hole was a bit unlucky, lucky and unlucky at the same time, but I got the job done and that’s what you need to do. I missed a lot of putts today, but grinded it out and just did enough to win out there.

“I finally realized I don’t need to play four days of perfect golf. I had a mediocre day yesterday and today and still got away with this. It gives me a lot of confidence.”

An was one of several players who held at least a share of the lead in the final round, but a 55-footer for birdie at the par-4 16th, the toughest hole Sunday on Lakewood National Golf Club’s Commander course, gave An a two-stroke advantage over a host of chasers.

“It was shocking,” An said. “But it was about time to go in, so that was a little relief there. I missed a lot of short putts today, so I wasn’t putting great. I hit it a little too hard and it was leaking a little right… and it broke left again and went into the hole. I think that’s what golf is. You miss all the putts and that was a perfect time to make one happen. That helped me hit a good shot the next hole as well. I think it’s chaos in my head, missing all day but this went in. It’s golf.”

After a par at No. 17, An’s tee shot found the pine straw and cattail bushes off the right side of the fairway of the 473-yard par-4 18th. Then 30-year-old left his approach in the greenside bunker and missed a 10-footer for par from the back fringe. The bogey dropped him to 17-under par and, coupled with 54-hole leader Michael Gellerman’s birdie at the par-3 17th, into a tie for the lead.

Playing partner Ben Griffin and MJ Daffue, playing out of the final group, both ran potential tying birdie putts by the edge of the cup on No. 18. Gellerman needed to two-putt from beyond 30 feet on the 72nd hole in order to force a playoff with An. The 29-year-old Sterling, Kansas native ran the first putt eight feet past the hole, and his comebacker for par slid past the high side. An inconsequential tap-in putt (for the time being, at least) lipped out, dropping him from a five-way T2 and into an eight-way T6, a difference of 88.87 points on the Korn Ferry Tour Regular Season Points List.

The near-misses on the 18th green left An as the outright winner.

While it was An’s first PGA TOUR-sanctioned victory, he previously won the 2014 Rolex Trophy on the Challenge Tour, 2015 BMW PGA Championship on the DP World Tour, and 2015 Shinhan Donghae Open on the Korean Tour.

“I came close a lot of times on PGA TOUR, and people still think, why are you here?” said An, a three-time runner-up on the PGA TOUR, two of which were playoff losses. “Well, I didn’t have a good year, but to have a win early in the season, I think that helps a lot. My goal is not to just get my card, but my whole team – my coach, my manager and my wife – all believe and I think I’m capable of doing a lot better things.”

Much has changed for An in the years since his last victory.

For starters, An, who moved from South Korea to the United States in 2005 and attended the David Leadbetter Golf Academy, is in his first season on the Korn Ferry Tour after six consecutive seasons on the PGA TOUR. An earned Special Temporary Membership in 2015-16 after a playoff loss in the rain-shortened Zurich Classic of New Orleans. An made the FedExCup Playoffs each of the next four seasons, highlighted by finishes of 42nd (2017-18), 53rd (2018-19), and 33rd (2019-20). He also represented South Korea in the 2016 Olympic Men’s Golf Competition, where he finished T11. Another high point was the 2019 Presidents Cup, which saw An total two points for the International Team in a narrow 16-14 loss to the United States.

An and his wife, Hee Jae (goes by Jamie), also welcomed their first child to the world, Sunwoo Stanley. Their son’s second birthday was earlier this week, so the couple celebrated last weekend before they drove from their home in Orlando, Florida to Lakewood Ranch.

“It’s impossible to travel with the just the two of us,” An said of he and his wife. “Thankfully, this week we have in‑laws in Orlando, they’re taking care of (Sunwoo Stanley) and this week feels like old days. Everything just clicked. Having dinner with her every night… it’s hard to describe, but it felt very relaxing and calm. It was great to have her here.

“Definitely not going to give (Sunwoo Stanley) the trophy, because he’s going to throw it on the ground,” An continued. “I’ll keep it up there and maybe in later years he’ll know what it is, what it means. I can’t wait to see him. Hopefully next Sunday, but if I don’t make it tomorrow, I get to see him Tuesday.”

Next up for An is Monday’s open qualifier for The Honda Classic, one of his favorite PGA TOUR events. An and his wife will make the three-hour drive to West Palm Beach, Florida in a car fit for a champion: a Lamborghini Urus.

“You have to play almost the best golf you can to make it,” An said. “It will be great if I make it, and if I don’t, just going to enjoy my three weeks off.”

With the win, An climbs from 84th to fifth on the Korn Ferry Tour Regular Season Points List.

The 2022 Korn Ferry Tour season continues Thursday, March 17 with the first round of the Chitimacha Louisiana Open presented by MISTRAS at Le Triomphe Golf and Country Club in Broussard, Louisiana.