Share
Facebook
Twitter
WhatsApp
Email
Print
“We are not the favorites,” said Japan team manager Park Joo Bong after seeing the defending champions roll Indonesia 3-0 in the semi-finals to reach their second successive final in the Badminton Asia Tong Yun Kai Cup at the Queen Elizabeth Stadium in Wanchai, Hong Kong China on Saturday.
“This is our second team and to reach the final is an achievement itself for the players. It is our grooming process and we are happy the way the players have responded.”
The second semi-final is between second seeds China and hosts Hong Kong China which will be played later tonight.
Japan, however, did face some resistance in the men’s singles before Kanta Tsuneyama found his rhythm to prevail 15-21, 21-17, 21-16 in a marathon 75 minutes in the men’s singles against Shesar Hiren Rhustavito to clinch the winning point.
The champions snatched the point and this was in the men’s doubles with Takuro Hoki-Yugo Kobayashi needing only 32 minutes to tame Indonesian youngsters Frengky Wijaya Putra-Sabar Karyaman Gutama.
Sayaka Takahashi who is ranked women third in her country after Nozomi Okuhara and Akane Yamaguchi was hardly troubled by Ruselli Hartawan in her 21-15, 21-15 in the women’s singles for Japan’s second point.
In the inaugural championships held in Ho Chi Minh Stadium in 2017, Japan became the first holders of the Tong Yun Kai Cup with 3-0 win over South Korea in the final.
For Indonesia, it was another disappointment. At the last edition, Indonesia went out in the quarter-finals. Badminton Asia
RESULTS
SEMI-FINALS
JAPAN beat INDONESIA 3-0
(Japan first)
Men’s doubles
Takuro Hoki-Yugo Kobayashi beat Frengky Wijaya Putra-Sabar Karyaman Gutama 21-11, 21-18
Women’s singles
Sayaka Takahashi beat Ruselli Hartawan 21-15, 21-15
Men’s singles
Kanta Tsuneyma beat Shesar Hiren Rhustavito 15-21, 21-17, 21-16
- Advertisement - 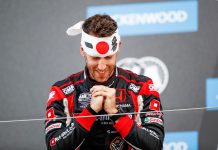