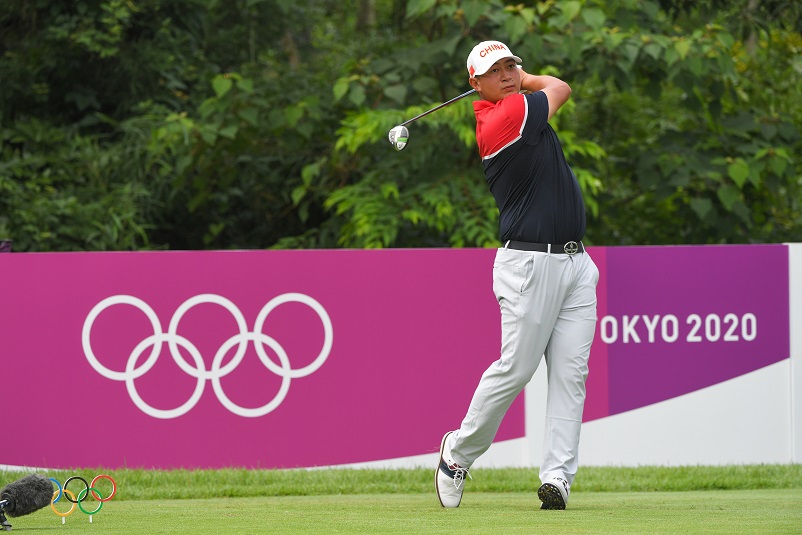 A carefree attitude has earned Carl Yuan a career first PGA TOUR start on U.S. soil this week and he is now counting on an unlikely partnership to propel him to a strong showing at the RSM Classic.

China’s Yuan, 24, finished co-medallist in Monday Qualifying after carding a superb 8-under 62 where he will be joined by Chinese Taipei’s Kevin Yu at Sea Island Golf Club in St Simons Island, Georgia. Yu shot a 64 to claim one of four spots available on Monday against more than 160 hopefuls.

It will be Yuan’s fourth PGA TOUR start following two appearances at the WGC-HSBC Champions in China and 2020 Puerto Rico Open.

“I’m really excited to play the RSM, which will be my first PGA TOUR event on U.S. mainland,” said Yuan. “I just had a simple mindset, and did not have much expectation. Played it shot by shot and the putter was working nicely.”

Yuan roped in former University of Washington teammate and female professional golfer, Julianne Alvarez as caddie on Monday and will maintain the partnership as he chases a strong week in what is the last of nine stops in the Fall portion of the 2021-22 PGA TOUR Season.

Alvarez, who hails from New Zealand, was a member on the 2016 NCAA Women’s National Championships winning team where she earned the winning point for Washington.

“Julianne is staying with us at my home (in Jacksonville) before heading back to New Zealand. She was really positive and kept the good energy throughout the round. She will be on the bag this week as well,” said Yuan.

“I will go for my best effort and try to make the most out of it. The most important thing is to enjoy the tournament. It was not easy earning the start with over 160 players in the Monday qualifier. I will cherish this opportunity and let the result take care of itself.”

In his last start on the PGA TOUR, he missed the halfway cut in Puerto Rico but posted a commendable T17 finish at the WGC-HSBC Champions in front of his home fans in 2019.

Yuan’s appearance on the PGA TOUR this week is also a deserving reward for the young Chinese who had a fighting chance to earn his TOUR card through the Korn Ferry Tour last season.

He sat in 27th position towards the tail-end of the Regular Season where the top-25 earn PGA TOUR cards but chose to return home to China in late June to fulfil his obligation to represent his country in the Olympic Games. After finishing tied 38th in Tokyo, he returned to China to prepare and play in the National Games in September where he won gold in the individual category.

His Monday success and teaming up with a familiar face is giving Yuan some positive vibes ahead of the RSM Classic which will see the first two rounds being played on the Seaside and Plantation courses. The Seaside will be used during the weekend rounds.

“I do feel good at this point. Both courses are challenging with firm greens rolling like about 12. I’ll need to put some hard work on the greens for sure. I certainly enjoy being out here to compete with the big guys, and will aim to have a great time,” said Yuan.