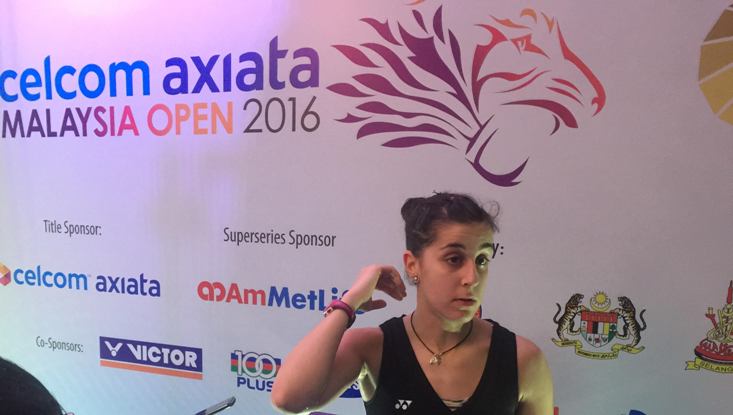 # Blames flu and cough for her defeat to Wang Yihan

Defending champion Carolina Marin surrendered her Malaysian Open title tamely when she was beaten by China’s sixth seed Wang Yihan in straight sets 21-13, 21-15 in the quarter-finals at Malawati Stadium in Shah Alam on Friday.

It has been a bad year for the Spaniard who also failed to retain her All-England title in March when she was beaten by eventual champion Nozomi Okuhara in the semi-finals.

Her campaign in the USD550,000 Celcom Axiata Malaysia Open Superseries Premier may have ended but Marin is looking at “better things” to come when she plays in next week’s Singapore Open Superseries.

Marin, blamed her flu and bad cough for her defeat. She also pulled out from the India Open Superseries in New Delhi before the Malaysia Open because she was sick.

“I was sick with fever of 40 degrees. Had flu and bad cough and I am not in the best of shape,” said Marin.

“I am not happy with my performance. Badminton today is not like before. The level between the top 10 players in the world is about the same. So losing to Wang Yihan is not a surprise.

To a question that she has lost two titles this year (the All England and Malaysia Open) Marin shot back and said: “I have not won a title yet so far this year.

“I hope to bounce back in next week’s Singapore Open.”