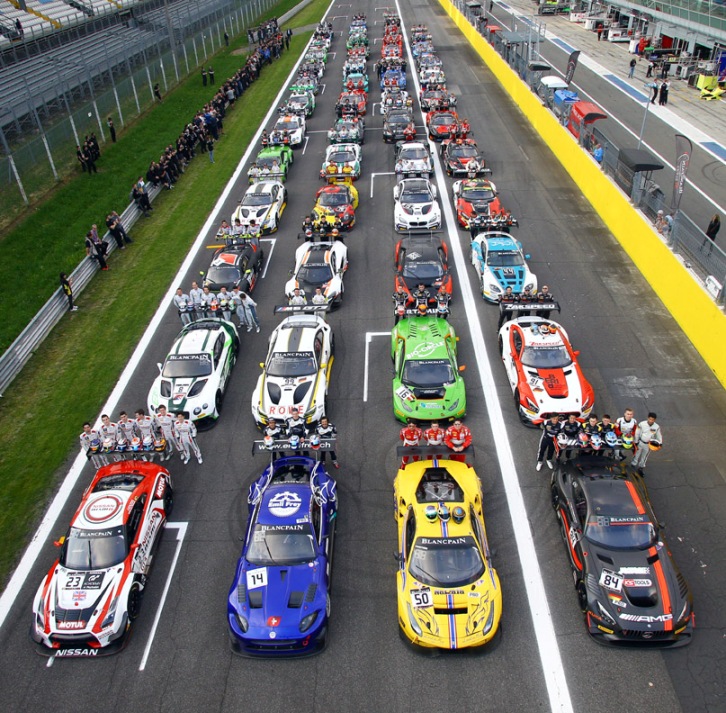 Eight place in a huge field of 57 competitors at the first race of the  Blancpain Endurance Championship for Grasser Racing Team, plus an unfortunate retirement for the second car after a collision: Team principal Gottfried Grasser was happy with his team and drivers after the Monza event, but could not avoid a slightly critical view on the situation in general.

Having a look also on some other cars and teams, it seems obvious that the Lamborghini Huracan GT3 this season really was anything else than favoured by the current BoP – always a difficult factor in all kind of GT racing. “We got 30 extra kilos additionally to a two millimeter reduction of the air restrictor compared to Monza 2015, which means that in total we are lacking about three to four tenth in comparison to the top cars.”

A situation already showing in qualifying, when Mirko Bortolotti, known as one of the best qualifiers in the field,  just managed to get into the top 20. But due to the extremely competitive field with 31 cars within one second in qualifying there seems to be no way to equalize the weight disadvantage and power limitation.

After the start it immediately looked much more promising for car number 16, as Jeroen Bleekemolen made good use of the typical Monza first corner confusion by coming up to eights place. He was then able to keep up with the speed of the cars around him,  but was thrown back by a drive-through-penalty for allegedly having taken a shortcut in turn one  at the start.

The penalty dropped him back to 32nd, but he managed to make his way up to 14th until the mandatory driver change to Rolf Ineichen after the first hour of the three-hour race.

The pitstops also worked very well, without any unnecessary loss of time, but there was no chance of making up the difference to the top cars, who had already built up quite an impressive advantage, in the last two hours. “During the last stint I really gave it all and with the eigth place at least we collected some valuable points”, Bortolotti said.

“To do more was just impossible, also due to the penalty.” Grasser was adamant that “I really can´t blame anybody within the team for anything. Everything worked really well under the given circumstances. All our drivers did a very good job, they all proved to be fast and on an equal level of performance. But maybe the people in charge can have a decent look again at the current BoP situation for the future.”

#19, the second car with Luca Stolz, Michele Beretta and Andrea Piccini only started the race from P35 on the grid, “but we managed to rise up to seventh position until the second driver change”,  said  young German Stolz. Afterwards, Piccini, who did the last stint, at once got involved into some hard fights, especially after being thrown back to 15th afters a drive through  for overtaking under yellow flag. Then bad luck really hit after a collision with the hard pushing Jaguar of the Frey team, which meant he had to retire the car. “Luck was really not on our side this time, a top ten position would have been really important to us”, Stolz stated with some disappointment. “But next time in England we will try again and hopefully then get a better result”, Piccini added.

But the next challenge for  Grasser Racing comes next weekend at Sachsenring with the second event of this season´s ADAC-GT-Masters. After the sensational win of  Rolf Ineichen and Christian Engelhart at Oschersleben two weeks ago team principal  Grasser now would like to see another podium as a confirmation: “In this series the BoP seems to be a bit better balanced, there we don´t have the additional 30 kilos, so our chances to race at the front from the beginning is much better.” Engelhart is also quite positive: “We have to see if we can carry over our performance from Oschersleben to Sachsenring. But the track should suit the Lamborghini and for sure it suits me. Even not having won there, I have already been on the podium.”