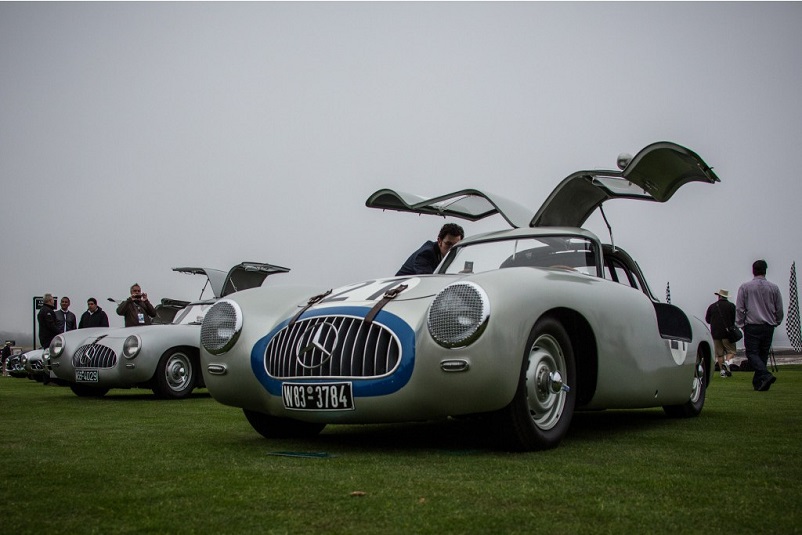 It could hardly get more exquisite than this: at the annual Monterey Car Week in the grounds of the Pebble Beach Golf Club, the most exclusive and spectacular classics in motoring history are presented, admired, awarded prizes and sometimes even auctioned off for record-setting sums. Mercedes-Benz will also be present with several vehicles this year (August 12 – 15, 2021).

The focus will be on the history of the Mercedes-Benz SL. Examples of several generations of these fascinating sports cars will be on display at Pebble Beach – ranging from the 300 SL racing sports car from 1952 and the legendary 300 SL Roadster from 1957 to an SL 55 AMG of 2003. The SL tradition lives on: The latest all-new SL generation (R 232) will come soon.

The birth of the SL sports car: Mercedes-Benz sports cars have a very close connection with the USA. Back in 1953, American Max E. Hoffman was convinced that a sports car from Mercedes-Benz would be successful on the American market. Hoffman, the brand’s importer for the eastern United States, travelled to Untertürkheim to promote his idea for extending the model line-up.

The minutes of a board meeting on September 2, 1953 showed: “In the USA, people expect Mercedes-Benz, a company with a particularly good name in that country, to offer under all circumstances a sports car which alone can provide a basis for the existence of the dealer organisation.”

These discussions resulted in two models, the 190 SL (W 121) and the 300 SL (W 198). Hoffman was proved right: in 1954 and 1955 alone, no less than 85 percent of the 996 300 SL Coupés built were exported to the USA. Throughout the entire production period, Mercedes-Benz delivered more than half of all its 300 SL to North America. The subsequent SL model series continued this success story. Many of the best kept specimens can be seen regularly in Pebble Beach.

Mercedes-Benz in North America: Mercedes-Benz Classic will not be the only presenter of valuable classics from the brand with the three-pointed star during the Monterey Car Week – numerous enthusiasts of the brand will present exceptional models from their private collections. These models are expected:

Concours d’Elegance celebrates its 70th anniversary: the competition for outstanding automotive elegance has been held every year since 1950 on the Pacific coast of California. The only exception was 2020, when the event had to be cancelled due to the coronavirus pandemic.

This is why the 70th Pebble Beach Concours d’Elegance, featuring 200 breath-taking cars and exquisitely and elegantly dressed ladies and gentlemen, will take place on Sunday, August 15, 2021. Around the 18th hole of the golf course, cars will be awarded prizes, including the classic “Best of Show”.

On the Thursday before the Concours, around 150 historic cars will take part in the Pebble Beach Tour d’Elegance, a scenic trip of approximately 75 miles, which will demand a great deal of skill from the drivers due to its topography. Monterey Car Week events also include classic car auctions from some of the world’s top auction houses. In a typical year, around 100,000 visitors from all over the world come to this exquisite event.