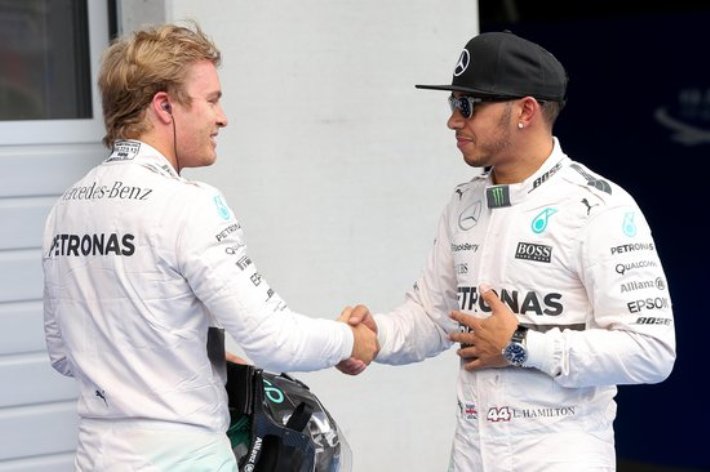 At the end of a compelling season in which both drivers’ fortunes have ebbed and flowed Rosberg holds a precious 12-point advantage in the drivers standings over his Mercedes teammate.

But it was Hamilton in the lead from Rosberg at the start of the deciding final race of the season.

The German will emulate his father Keke, the 1982 champion, and claim his maiden title if he finishes in the top three – irrespective of where his friend and foe Hamilton comes in.

The title protagonists cut relaxed figures in the pre-race drivers parade, the nerves well hidden under the sunglasses protecting them from the brilliant setting sun.

Hamilton told Channel 4: “There are lots of Brits here to support me, there’s an incredible amount of positive energy.

“I planned to get pole, that’s where I am but so much can happen, I’ve just got to focus that I can win.”

Standing beside him Rosberg as he has done throughout was keeping his emotions in check.

“I’m trying to keep it business as usual, not easy in the circumstances, but I’m liking the car, it’s fast.”

Rosberg has had to sit and suffer as his Mercedes teammate ran off with the drivers crown in 2014 and 2015.

But after a gripping 2016 season played out over a record 21 races the calm and cool German is now so close to the F1 holy grail he can see his image reflected on the trophy.

Hamilton has rattled off wins in the last three races in the United States, Mexico and Brazil to ensure the title goes down to the last throw of the dice at Abu Dhabi’s glittering floodlit desert venue.

Hamilton bossed qualifying on Saturday to take pole, with Rosberg alongside him on the front row.

For Hamilton, whose roller-coaster season has been marred by some desperate bad luck, he will need the F1 gods to be in a particularly malevolent mood towards his rival if he is to join the exclusive club of drivers who have won four titles.

“I’m the champion in my own heart, whatever happens,” Hamilton remarked provocatively on Friday.

For Mercedes the Rosberg v Hamilton rivalry is priceless promotion for their brand, with team principal Toto Wolff keeping the box-office drama on the road.

Which is more than his drivers managed to do in Spain when they wiped each other out with a first lap crash.

Wolff, like tens of millions of F1 fans, is anticipating a mighty scrap in Abu Dhabi.

“It’s normal that here this is like a volcano to erupt with two of them, the two very different personalities,” he predicted.

Sunday’s title showdown evokes memories of the infamous climax to the 1990 championship, when Ayrton Senna took his McLaren team-mate Alain Prost out at the first corner in Japan.

Wolff though is adamant that will not be repeated.

“I think it is very difficult to construct such a situation and make it work. I don’t think that’s the way Nico operates and it would certainly not look very good.”

Aside from the destination of the 2016 championship Sunday’s race spells retirement for two of the sports most cherished stars – 2009 world champion Jenson Button and Brazilian Felipe Massa. – Agence France-Presse