Home Football Italy celebrate on road to redemption at Euro 2016 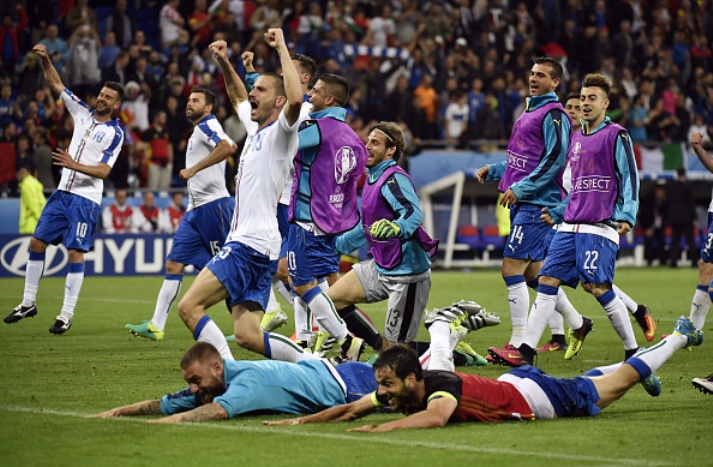 Emanuele Giaccherini and Graziano Pelle sparked wild celebrations by Italy after scoring the goals in a 2-0 win over world number two side Belgium in their opening Euro 2016 match.

Belgium’s Red Devils were punished by a ruthless Italian performance despite dominating for long spells of the Group E clash in Lyon.

Italy’s coach said the team’s first round failure at the 2014 World Cup should inspire the Azzurri to success at the European Championship.

“That open wound from two years ago needs to burn in the players,” Conte said.

iaccherini’s strike just after the half hour put future Chelsea manager Conte’s men in front before Southampton striker Pelle sealed the win with a thumping finish from Antonio Candreva’s cross.

Veteran goalkeeper and captain Gianluigi Buffon sprinted the length of the pitch to join in the celebrations. Pelle also jumped as though he had won the tournament.

Belgium now face a crucial clash with Ireland on Saturday in Bordeaux if they are to avoid an embarrassing early exit.

“The defence was fantastic, I think we have the best back line in the competition, they made the difference,” said goalscorer Giaccherini

At the other end, the Belgians were exposed when Bonucci’s long floated pass found Giaccherini in behind the Belgium defence to stroke his shot past the exposed Thibaut Courtois.

Belgium upped the intensity after the break and twice came close when Lukaku clipped the post before his replacement Divock Origi headed over when unmarked from close range.

But Italy continued to pose a threat on the counter-attack and sealed a massive three points when Pelle volleyed into an unguarded goal from Candreva’s unselfish cross.

Spain’s quest to win an unprecedented third consecutive European championship got off to a winning start as Barcelona defender Gerard Pique overcame dogged Czech defence to seal a 1-0 win in Toulouse.

Pique, a target of abuse from Spain fans this season due to unflattering comments about Barca’s rivals Real Madrid, was the unlikely hero as he powered home man-of-the-match Andres Iniesta’s cross at the far post three minutes from time.

“It is very important to start well,” said Pique.

“We played well, controlled the game, created chances, but the ball didn’t want to go in. In the end I had the luck to score the goal.”

Spain’s build-up to the tournament was rocked by reports last week claiming goalkeeper David de Gea had been involved in a sex scandal.

But coach Vicente del Bosque kept faith in the Manchester United shot-stopper by handing him the gloves ahead of the legendary Iker Casillas.

Cech’s resistence was finally broken in uncharacteristic fashion when Pique was on hand to turn home Iniesta’s inch-perfect cross at the back post.

However, there was still time for De Gea to justify his inclusion as he parried Vladimir Darida’s thunderous volley to safety.

Ireland and Sweden remain in the fight to make the last 16 after Ciaran Clark’s own goal cancelled out Wes Hoolahan’s brilliant finish for the Irish in Paris.

Hoolahan met Seamus Coleman’s flighted ball with a controlled first-time strike three minutes into the second-half at the Stade de France to give Ireland a lead they fully deserved.

However, having been kept quiet for long spells by the Irish defence, Sweden captain Zlatan Ibrahimovic created the equaliser in the 71st minute when his cutback was turned into his own net by Aston Villa defender Clark.

“Of course the goal deflates you and there is disappointment in the dressing room, but I don’t think the players should be downhearted with their performance,” said Ireland manager Martin O’Neill

“I think they should be absolutely thrilled with the way we played.”

By contrast, Sweden boss Erik Hamren admitted his side need to improve drastically if they are to reach the knockout stages.

“Even though we managed to come back and equalise, I am disappointed. We will need to play at 300 percent to get through,” he said. – Agence France-Presse