Home International Itthipat surges into halfway lead with Tirawat on Day Two of The... 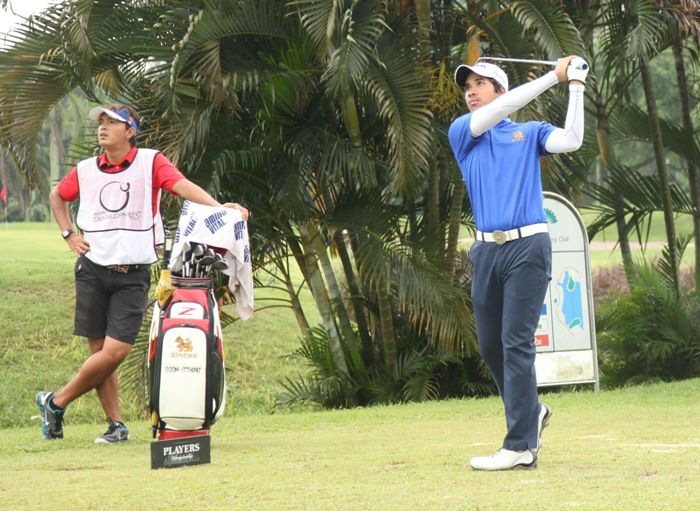 Young talent Itthipat Buranatanyarat of Thailand rode on his hot streaks to register a second consecutive six-under-par 66 for a share of the halfway lead at the US$100,000 Players Championship on Thursday.

Countryman Tirawat Kaewsiribandit maintained his share of the overnight lead after returning with a 68 to lead by one shot alongside Itthipat with a 12-under-par 132 total at the Raffles Country Club’s par-72 Palm course.

Singapore-based Australian Unho Park, who held a share of the overnight lead, settled one shot back in third after signing for a 69 while four other players, including Nirun Sae-Ueng of Thailand and Ian Andrew of Indonesia, shared fourth on 135.

Reigning Asian Development Tour (ADT) Order of Merit winner Casey O’Toole of the United States posted a 68 to stay six shots off the pace in tied-11th with nine other players, including his playing partner Mardan Mamat, who remained as the highest-placed Singaporean following a 70.

The 22-year-old Itthipat, who claimed his breakthrough ADT win last season, returned in the morning to complete his five remaining holes from round one where he birdied four-in-a-row starting from 15.

He stumbled with a bogey on his opening hole 10 but recovered promptly with a birdie on the next before capping a flawless back nine 30 highlighted by six birdies.

“I had a great finish to my opening round this morning. I putted well and I hit my approach shots very good. I managed to hit it nearer to the pin than how I did yesterday. Tee shots are very important and you need to hit a lot of fairways to score well here,” said Itthipat.

“Winning on the ADT last year has given me a lot of confidence in my game. I will try my best to secure a second victory this week,” added the amiable Thai.

Tirawat, chasing for a breakthrough victory on the ADT, said: “My game’s feeling good. I played pretty well, just like how I did for the first round although I missed a few birdie chances on the par-fives. I am feeling confident heading into the remaining rounds so hopefully I can maintain my good form.”

Park got off to a strong start with three birdies in his opening five holes but stumbled with bogeys on sixth and seventh before bouncing back with a birdie on eighth after draining a 40-footer putt. He added two birdies against one bogey on his way home.

“I didn’t putt as well as I did yesterday and I wasn’t able to recover well from my bad shots as well. But overall, I am still happy with how I played. I know I am still in a good position but I will just play my own game in the next two rounds,” said the 42-year-old Park.

The halfway cut was set at one-under-par 143 with a total of 63 players qualifying for the weekend rounds of the Players Championship, which is the first ADT event to feature in Singapore since the burgeoning Tour was inaugurated in 2010.

The winner of the ADT’s season-opener will earn a coveted spot in the US$1 million SMBC Singapore Open which will take place at the Sentosa Golf Club from January 28 to 31 next week.