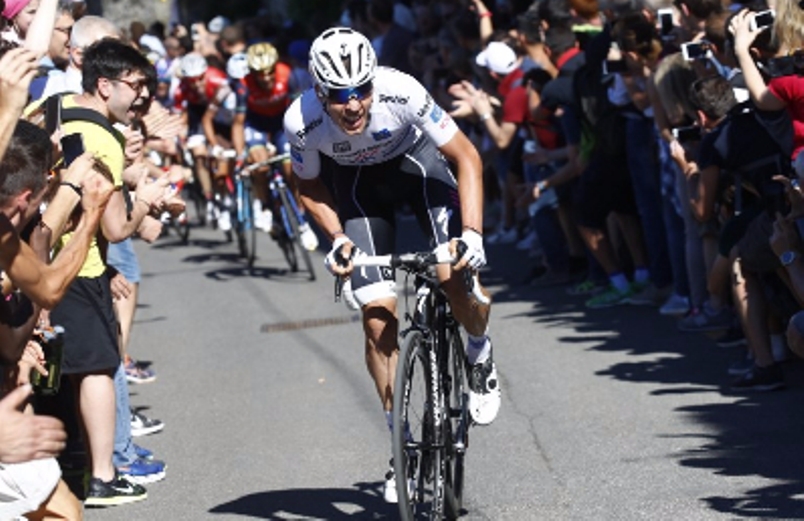 Luxembourg’s Bob Jungels claimed the first sprint win of his career on the 15th stage of the Giro d’Italia on Sunday as race leader Tom Dumoulin retained the pink jersey.

Jungels, who wore the pink jersey earlier in the 100th edition of the race, finished the 199 km ride from Valdengo to Bergamo just ahead of Colombia’s race favourite Nairo Quintana after finding himself in the rare position of a bunch sprint.

With a host of fellow all-rounders and climbers for company, the Quick Step all-rounder took his chance 100 metres before the finish to claim his maiden win on the three-week Italian race.

“This is my first sprint victory. To do it at the Giro in front of these guys is wonderful. It’s not easy to realise but I’m super happy with this victory,” said Jungels, who finished sixth overall on his debut last year.

“I knew I had good legs today as I felt good in the climbs. I tried my luck in the final climb but it was a bit longer than I expected.

“In the downhill I was in a perfect position, on the wheel of (Domenico) Pozzovivo for sprinting.”

Sunweb team leader Dumoulin and the chasing peloton crossed the line six seconds later to allow the big Dutchman to maintain an overall lead of 2min 41sec on Movistar rival Quintana before the race’s third and final rest day Monday.

Dumoulin has been in the race lead since crushing the field to win the 10th stage time trial last Tuesday in Montefalcone, a win that pushed Quintana into second overall at nearly three minutes behind.

Before the crucial third week takes the peloton into the high mountains, where Quintana is expected to come into his own, the Colombian climbing specialist has been trying to chip away at his lead.

A day after countering Quintana when he attacked on the climb to Oropa, where the Dutchman won his second stage of this edition to tighten his grip on the pink jersey, his Sunweb team were on tenterhooks all day.

“It was a hard day at a very high average speed. There were a lot of breakaways but always some teams weren’t happy with it,” said Dumoulin.

“Eventually after 110km, a group went. Then it was a very hard finale with a lot of favourites attacking. But we stayed calm and it was a good day for us.”

The race resumes Tuesday with a 222km 16th stage from Rovetta to Bormio which features two ascents of the Stelvio climb.

After climbing 1854 metres to crest the Mortirolo, the peloton tackles the Stelvio from the Italian alps side to crest at 2758 metres, and then climb back up the Swiss side of the mountain for the first time before a long descent into Bormio.

Results from the 15th stage of the Giro d’Italia, between Valdengo and Bergamo on Sunday: