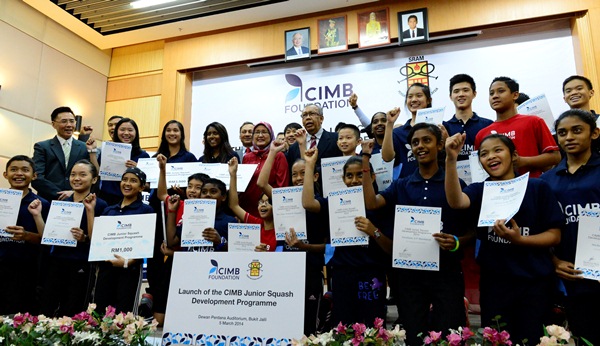 CIMB FOUNDATION today announced it will give the CIMB Junior Squash Development Programme a financial boost in 2014.

Speaking at the launch of the CIMB Junior Squash Development Programme 2014, Raja Noorma Othman, Chief Executive Officer, CIMB Foundation said: “We are proud to witness the impressive accomplishments of the talented junior squash players under this programme, as clearly shown in the players’ consistent winning performances in international tournaments worldwide.

“In addition to renewing our commitment to sponsor the programme, we are pleased to give it a further boost by increasing our pledge amount this year, bringing our total sponsorship to RM13.1 million.”

The programme celebrated its best results to-date, with the outstanding feat of three talented juniors in the British Junior Open 2014. S.Sivasangari and Aifa Azman did Malaysia proud by bringing home the Girls Under-15 and Girls Under-13 titles respectively. Ng Eain Yow, who was last year’s Under-15 champion, finished second in the Under-17.

Prior to that, the juniors stamped their class by making a complete sweep of all eight titles at the Pontefract Junior Open in England; while at the Asian Youth Games in Nanjing, China, they bagged three out of four gold medals at stake.