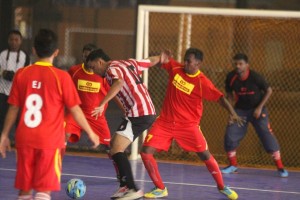 AmBank Group players in action against Public Bank in the men’s category.

In the men’s category final, BSN upset Maybank, who had one national and three state players, 3-1.

In the final, BSN outclassed Public Bank 5-0 thanks to Mohd Faris Ghazali, who was named Man of the Match. For their efforts, BSN won RM3,000

In the women’s final, Siti Khairani scored the only goal as RHB won 1-0 and a cash prize of RM1,500.