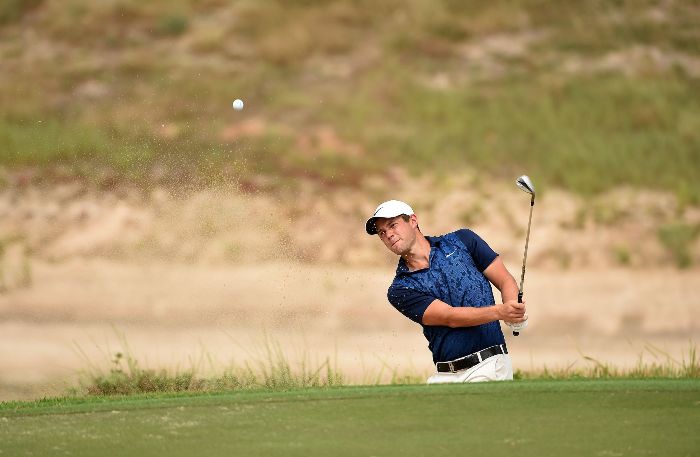 Dodge Kemmer of the United States returned with six straight birdies for a superb nine-under-par 63 to lead in the opening round of the PGM CCM Rahman Putra Championship on Wednesday.

Starting from the 10th tee, the 28-year-old only shot one birdie in his opening nine holes before an eagle on hole three sparked a birdie spree as he completed the back nine with a remarkable eight-under-par 28 in the Asian Development Tour (ADT) event.

Darren Tan of Australia and Nattawat Suvanajanakorn of Thailand posted 65s to trails by two shots in second place while Shunya Takeyasu of Japan, Sutijet Kooratanapisan of Thailand, Janne Kaske of Finland and Jordan Sherratt of Australia were a further shot back in tied fourth.

Kemarol Baharin was the best placed Malaysian after day one as he shared eighth place with George Gandranata of Indonesia and James Byrne of Scotland as they returned on matching 67s.

Kemmer, who finished second at the Qualifying School two weeks ago, continued his rich vein of form at the Kelab Rahman Putra Malaysia.

“I sank a 25-footer eagle and that got my game going. I went on to birdie the rest of the holes which was nice,” said Kemmer. “The game’s feeling great since securing my card at Qualifying School. The course is in a good shape and I am looking forward to the remaining rounds.”

Tan overcame his poor results at the Rahman Putra course after trading eight birdies against one bogey to stay within touching distance of the leader.

“I have never really play well here in the past but I just managed to hit a lot of fairways. It can be easy to score if you can hit the fairways. It’s a good start and I hope to continue my form from here,” said Tan.

With the Olympic Games looming this July where golf will be reintroduced as a medal sport, players in the region could earn their spots in Rio de Janeiro by earning Official World Golf Ranking points through the Asian Tour and ADT.